I don't drink rum, but I love Bundy!

On a recent writer’s visit to the city of Bundaberg I was incredibly surprised, inspired and in some instances, led astray! Here’s why and how… 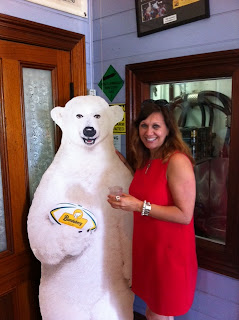 The Bundy Bear: Everyone knows Bundaberg is famous for it’s big white Bundy bear and rum. But on my inaugural visit to the town, I wasn’t overly fussed on visiting the landmark distillery, because I don’t drink rum… well I didn’t until I was seduced by the taste of the Bundaberg rum coffee and chocolate royal liquor (which you can only buy direct from the company). I also managed to consume some locally produced rum and raisin chocolate ice-cream (Mammino) and pick up some chocolate rum sauce. Oh how easily led astray I can be. That's me below tasting my first Bundy rum. 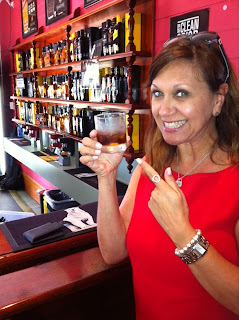 A barrel of fun: The Bundaberg Barrel is home of the world’s finest ginger beer! But even the iconic brown drink has evolved over time, and to be honest, I’m a bit of a fan of the changes. There’s now a range of flavours including Peaches and Guava sparkling drinks, designed also to be mixers with spirits. When you visit, grab some other local produce such as (but don't limit yourself to) dark chocolate ginger, soft chocolate fudge, Macadamia Jaffa nuts (from the Left and Right Nuts company). By stocking up you are supporting the local economy. Well, that was my excuse. For the kids, take a 3D tour, have a taste test and treat them to a temporary tattoo! I did! 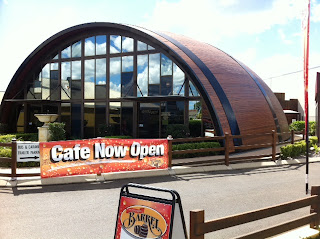 Hero Hinkler: Born in Bundy Bert Hinkler grew up fascinated by the ibis and obsessed with gliders, and in 1912 one of his own gliders took flight, less than a decade after the Wright brothers made their mark in the air. The Hinkler Hall of Aviation is a tribute to the town hero with hands-on activities including the chance to lie flat and imagine being in a glider yourself. Kids will love it. You can also have a pic taken with a Hinkler model aircraft (just like I did below!). 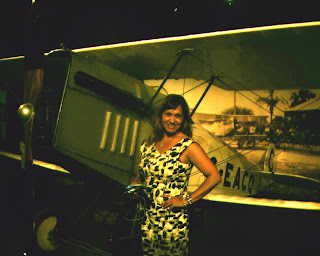 Botanical Gardens: I sat outside Café 128 on the edge of Bundy’s Botanical Gardens and felt unexpected serenity on a Saturday afternoon. I could’ve spent 50c on some pellets and fed the ducks if I had the urge, but rather just strolled along peacefully working off my generous fish and salad, served by very vibrant young staff. Kudos to them for the enthusiasm and hospitality. 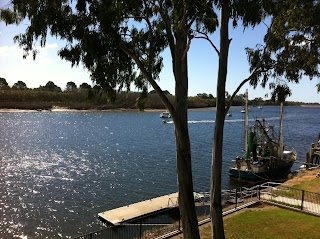 Best lunch: Grunskies By the River (1e Petersen Street) is popular with locals on the weekend but even on Friday it gets packed. The seafood matches the scenery (see pic above) and they do panko scallops (yummo!). Want more than you can eat in one sitting, then grab something to take with you from the cold store next door. 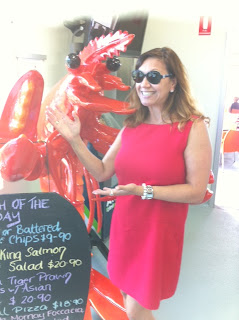 Nearby beaches: Bundy’s location is brilliant. 18km out of the centre of town is stunning coastline. Head to Bargara and eat at Kacy’s overlooking the water, or better still, GET IN it at Kelly’s beach and basin.
Best coffee: Many locals suggested Indulge cafe on Bourbong Street and at 7.30am on Saturday people were queuing outside. By 7.45am the cafe was full. Sue Gammon (Manager Bundy Library) also recommends Rosie Blu Gourmet Deli a few doors down. 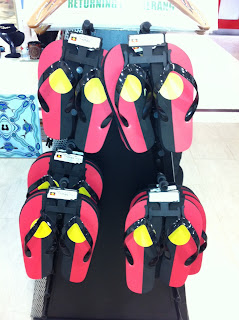 Shopping secret: My best buys were at the Gidji Art Shop in Hinkler Central shopping centre, where I admired locally produced artwork and grabbed some groovy Aboriginal-flag-inspired rings (above) and other treats. Also fabulous, the fab red, black and yellow thongs (below)! There’s going to be an Indigenous Art Exhibition in the Centre in NAIDOC Week, so be sure and check it out. For details email: gidjiart@gamil.com 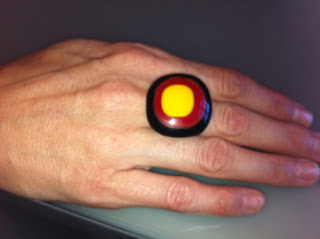 For more info and tips on the best that Bundaberg has to offer head to Tourism Queensland!