It's my pleasure to introduce to my blog Dr Lawrence Bamblett, a Wiradjuri man who works in community development at Erambie, NSW. Lawrence is also an AIATSIS Indigenous Research Fellow, and his mss titled Sport and cultural continuity on Erambie Mission was Highly Commended in the 2011 Stanner Award.

Over the next few months Lawrence will be reviewing a number of non-fiction titles in the 'Indigenous Studies' genre largely penned by non-Indigenous authors. I am grateful for his contribution, especially given I don't have the time to read and review these works... I'm still ploughing through piles of Aboriginal-authored books across a range of genres! It's not a bad position to be in, really.

Lawrence's first review is of Russell Skelton's King Brown Country. We welcome your own responses to the work also, just comment below. 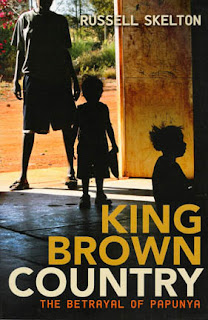 When I was a kid at Erambie, I went with my mates to the back of the mission where the abandoned car wrecks were. We had a plan to sniff petrol. My cousin, and best mate, was the ringleader and he siphoned the petrol and went first. In the end, I wasn’t tempted but I was in their company, a decision that came back to haunt me. An hour later, as he lay writhing in pain on his bed, his irate mother screamed, growled and swung at us both and I was scared into coming clean. The whole mission heard about what we had done and we met punishment around every corner for weeks afterwards.

After skimming the back cover and early pages of King Brown Country, I thought it would be about petrol sniffing. I thought it would describe how substance abuse became a serious threat to young people at Papunya. I expected to hear from people within the community (including sniffers) about what was happening. I hoped to read that the community had found a way of dealing with sniffing.

This book is not about petrol sniffing or substance abuse. It is a justification for an interventionist approach to Indigenous policy. It aims to shock a general audience, to supporting a change in policy, and to prove that self-management and self-determination are failed approaches. King Brown Country is about allocating blame for failure.

The book offers a case study of one female leader, from one Indigenous community, as evidence that self-management has failed. There is no doubt that the book tackles a serious and complex issue and some may feel that I am being too harsh in my assessment of the book. I recognise that this is an outsider’s view of a community. I understand that the author felt obliged to react to what he saw. However, I don’t apologise for asking a discussion about the merits of self-determining versus mainstreaming policies to be more balanced than this one. Leaving aside the offensive assumption that there is little, if anything, good to find in an Indigenous community, there is a glaring weakness in the argument made in this book.

The villain of the book is not solely a product of a self-managed community. She lived her early years (she was born in 1958) before the introduction of self-management as a policy in 1972. Even if she is guilty of the management practices as alleged, there is no evidence that she did not learn them from the paternal, government, mainstreamed management she grew up with. It seems lazy, and predictable, to assume that Indigenous culture is the problem.

Moreover, a young leader from Papunya is praised for his leadership and commitment to the community. He is a product of a self-managed community (he was born after 1972). Yet, it is not considered that he might be an example of successful self-management.

I couldn’t disagree more with what the book says about Indigenous people. It tells the same old yarn, stop me if you’ve heard this one before, about Indigenous communities as either bad or terrible places. It says that we can’t manage our own communities. I suspect that this discourse of deficit is all heading toward – or back to – a policy of assimilation.  I‘ve spoken to people that lived through a policy of assimilation in the past and they said “No thanks” to a return to that way of thinking.

There are examples of self-management working for Indigenous communities. Erambie is a self-managed community that worked. My peer group learned our lesson about petrol sniffing and other dangers of life under the watchful eye of strong leaders. We lived a privileged life in the care of accomplished Wiradjuri people. We also learned about the value our people placed on a work ethic, Leadership, nurturing a sense of community, social and cultural responsibility, and countless other life lessons.

The author could have offered a more balanced and realistic account of self-management in an Indigenous community. He didn’t convince me that self-management doesn’t work because I am a product of a successfully self-managed Koori community.

Despite good intentions, King Brown Country does Indigenous communities a disservice by repeating the common view that we are failures. Say it enough and many people will believe it. This is exactly how a discourse of deficit operates.

I found the review interesting however it seems that the author has taken an extreme pro-indigenous view.

“Even if she is guilty of the management practices as alleged, there is no evidence that she did not learn them from the paternal, government, mainstreamed management she grew up with. It seems lazy, and predictable, to assume that Indigenous culture is the problem.”

Whilst I don’t agree with every element of this book, I do think that the above quote is bias. One could point out that there is no evidence that she did learn her management practices from the paternal government.

I find it a little hard to fathom why Dr Lawrence Bamblett leaps to the defence of the “villain” in this book or more correctly passes her mistakes off as possibly inherited behaviour from the government. I don’t think Alison Anderson iwas or is being led around by the nose on this matter. It doesn’t matter whether or not the person is indigenous or white her actions were portrayed as deplorable in the book and she has never answered or addressed any of the concerns detailed in the book despite numerous requests from a multitude of people. If there is no element of truth why has she not sought justice through the courts?

My point is that a blind leap to support someone and shift blame to the government by Dr Bamblett is just a polar opposite view of the book based again on little to no evidence.

I feel it is also lazy and predictable to assume that the government is the problem.

Anonymous? Thanks for pointing out that I'm pro-Indigenous. What else would I be? It seems that between us we've established that there is no evidence about anything. So, what do you think of the important issues raised in the book about self-determination and self-management? Do you think the author's argument about these issues is well made?

I met the Author in Ubud this year and listened to his talk on the book. He discussed a lot of the problems and failures but never offered any solutions even when prompted by the audience. Identifying problems is needed but logically,Solutions and the discussion of Successes are the next step.

As a contrast to this I would highly recommend Dog Ear Café: How the Mount Theo program beat the curse of petrol sniffing by Andrew Stojanovski http://mttheo.org/home/dog-ear-cafe/
cheers, robert