Review: Enora and the Black Crane 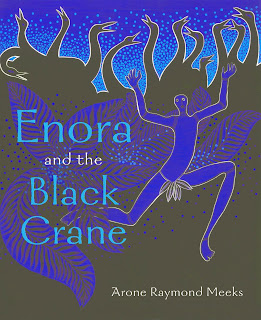 Enora and the Black Crane was first published by Scholastic back in 1991 and has now been released by Magabala Books. It is a traditional story based on Arone Meeks’ knowledge of the bush, the spirits who lived there and their laws as taught to him by his grandfather, a member of the Kokoimudgji tribe in Queensland.

Enora lives with his family in a tropical rainforest. Which I thought was interesting when first started reading the book because the illustrations are all in earthy inland colours, as opposed to lush greens of what I know rainforests to be.

However, I just needed to be patient, because what I was reading was a story where the natural world was just being created and Enora’s people are surrounded by delicious bush foods and amazing animals. When Enora discovers a shimmering rainbow of colour flying through the forest, his curiosity overwhelms him and he sets out to discover its meaning, and as the story progresses the colours appear with colourful feathers of all the birds.

Meek’s is an acclaimed visual artist and is descended from the Kuku Midiji people of Laura in Cape York, Far North Queensland.
Posted by Dr Anita Heiss at Thursday, June 25, 2009