From Wamba Wamba to Wadi Wadi country, I am grateful for Reconciliation Week 2011 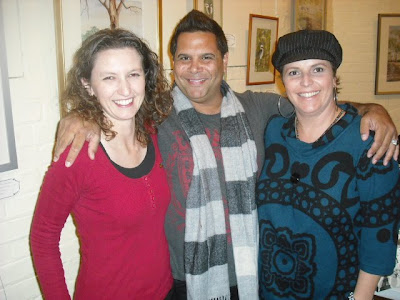 To be honest I haven’t always been an advocate for Reconciliation. When the Council for Aboriginal Reconciliation was set up in 1991 I was all of 22 years old and had a very simplistic view of it. I basically thought it was bizarre to have a government appointed body establish to essentially tell / teach whitefellas to respect and be nice to blackfellas. I told you my view was simplistic. I was also annoyed that as an Aboriginal person I was expected to participate in the process, because it was ‘Aboriginal reconciliation’ (read: for US), while non-Aboriginal people could choose whether they participated or not.

I kept my distance from any-reconciliation-thing until 1997 when I was living on the Gold Coast and received an invitation from my friend Jackie Huggins – a member of the CAR for six years – asking me to attend a women’s reconciliation dinner in Brisbane. I went because Jackie was and remains one of my dearest sisters. It was at that dinner –where 400 women were squeezed into a hall that legally held 250 – that I had my epiphany. I was confronted by the reality that there was a whole grassroots movement of Australians wanting to live respectfully and peacefully alongside Aboriginal people, and were happy to be part of a process that made that possible.

At the dinner that night I recall standing on my chair to take a photo of all the non-Aboriginal women in the room standing and reading a pledge to bring others into the process. It was quite an extraordinary moment. (So too was the moment when one of the speakers suggested it was the perfect time to hug an Aboriginal woman if they hadn’t had the opportunity to do so before. For the record: I don’t want to be hugged because I’m Aboriginal, okay?!).

And I know this because Reconciliation Week 2011 took me to both Deniliquin and Wollongong (NSW) where I saw the strength of conviction of supporters of Reconciliation, and I was blown away by the warmth and generosity of spirit of all those who participated in the events I went to.

The photo above is of members of the Nyerna Deniliquin Reconciliation Group: Jennifer Townsend, Steven Ross and Carlee Rundell-Gordon.

So, this is what I am grateful for in Reconciliation Week this year:

1. SYMBOLIC GESTURES: Kevin Rudd’s Apology to the Stolen Generations on February 13, 2008 was the most significant gesture to date in terms of the Reconciliation Movement. But there are others acts that are also necessary to not only recognise and respect Aboriginal Australians, but also to build bridges between black and white Australia.

These symbolic gestures include acknowledging country at events, meetings, festivals and in Parliament. Contrary to what Ted Baillieu thinks / says (and I’m pleased that on my recent visits to Melbourne everyone I saw / spoke to supported maintaining the status quo on that front), it is not tokenistic to acknowledge country unless in your heart you don’t mean it. If the act means something to the individual, then of course it is of value. I am grateful then, that at the recent NSW Premier’s Literary Awards that both the Premier and our new Arts Minister the Hon George Souris, both sincerely and effortlessly paid respects to country.

Flying the Aboriginal flag at schools, on Council Buildings and Town Halls etc is another important gesture and while I am disturbed that my recent visit to Deniliquin revealed that their local Council has recently voted against flying the Aboriginal flag full-time (with no logical explanation), I am grateful that my own local Council, Randwick, and Wollongong Council (and many, many in between) do in fact fly the flag full time. This symbolic gesture is a basic recognition that the Council building or Town Hall stands on the traditional lands of specific Aboriginal group. Quite simple really.

When I drive along the street in any town or suburb and I see the Aboriginal flag flying, I don’t say to myself, ‘Well done!’ Rather, I say, ‘About time.’

I must admit though, I was a little excited to see the flag flying at Sydney Airport as I arrived home last Wednesday. I wonder if it’s still there this week? And was it flying at other airports around the country as well? Do you know?

Does your local Council fly the flag full time? Does your child’s school? Your workplace? If not, what are you willing to do to make sure they do? 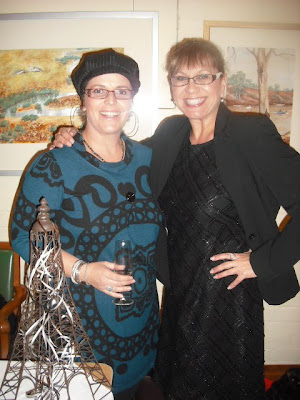 2. NYERNA DENILIQUIN RECONCILIATION GROUP: This mob is amazing. Made up of locals from Deniliquin (home of the Ute Muster and my handsome character Jake Ross from Paris Dreaming), they are incredibly pro-active and innovative in terms of bringing the community together in the spirit of reconciliation, targeting businesses / corporations and individuals. I’m grateful for the invitation to launch Paris Dreaming as part of Reconciliation Week in Deni, with a fabulous night at Peppin Heritage Centre complete with speeches by local Wamba Wamba man Steven Ross, and NWRG Chair Jenny Townsend. We were entertained by the deadly musos Adrian and Glen Ross and catered for with a fusion for French cuisine and bush tucker. It was Le Deadly. The pic above is of Carlee and I and a local version of the Eiffel Tower! 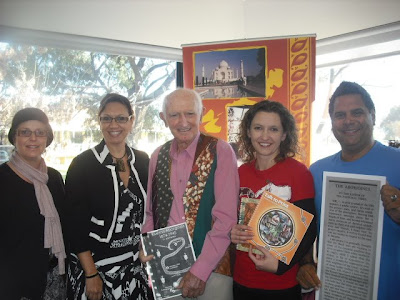 3. DENILIQUIN SHARED HISTORY PROJECT: One of the innovative ways the NDRG are engaging their community is through a new shared-history project which focuses on the positive roles pastoralists, land owners and Traditional Owners have shared in Deni and surrounding regions. The project is designed to highlight the role Indigenous people have played in the farming industry and the development of the region. I was pleased to be part of the launch of the project at the Deni Library where locals turned out with contributions of their own to add to the photos, letters, oral histories and other documents already being exhibited. I think it’s a fantastic template for communities around the country. For more details contact Jennifer Townsend: Jennifer.townsend@homesoutwest.com.au The pic above includes Carlee Rundell-Gordon, bush poet / performer Alex Allitt, Jennifer Townsend and Steven Ross. 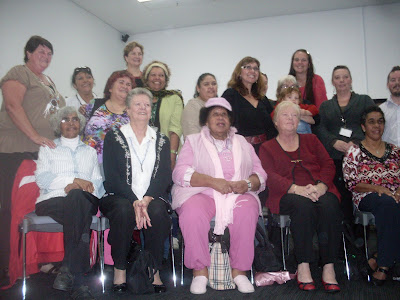 4. WADI WADI / WOLLONGONG: I’ve got a long-standing relationship with Wadi Wadi country through the South Coast Writers Centre and the Woolyungah Centre at the University of Wollongong. So I am always eager to get back down south to catch up with friends. Last Friday, Mabo Day, was one of the most extraordinary visits I have ever had, with a Reconciliation morning tea at Wollongong Library, coordinated by local sista Barb Brennan. I’ve never seen so many Aunties at a book event EVER (see pic above), and it warmed my heart and made me nervous at the same time. I’m grateful for the words of welcome and wisdom by elder Aunty Barb who also talked about the role of reconciliation and working together for a united community. With a theme of ‘Let’s Talk Recognition’ it was easy then to talk about my novel Paris Dreaming, because it aims to recognise the strong, capable, intelligent, hardworking Aboriginal women I know, admire, respect and what to see in Australian literature.

We had a lot of laughs on Friday in Wollongong, and it was true food my soul on many levels. I left feeling immensely grateful for the opportunity to share a few hours with like-minded women (and the two men who were brave enough to come along too!)

5. MEETING DEADLY DIVAS: Last week I had the most extraordinary experiences just meeting gorgeous women. Rhonda Gordon let me ride shot-gun from Melbourne back to Deni while Carlee drove, and I felt like Thelma and Louise plus 1! We laughed, we talked politics, we ate pies. Loved it!

In Deni, I met some fans at the launch of Paris Dreaming - Candice Duggan and Kylie Andrews (pictured below) – came along to Peppin’s, bought books and yarned too. Love it! 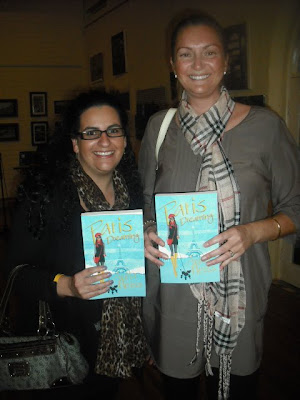 In the Gong, I met Barb Brennan (picture with me below) who was so full of energy, enthusiasm and charisma I was concerned she’d steal the stage from me – I mean how many deadly divas can you fit in one library? Seriously, meeting all these gals made last week on of the best Reconciliation Weeks on record. I’m grateful we’re all walking the same path together. 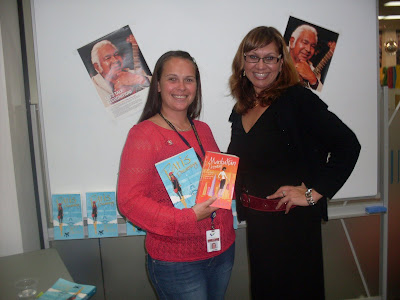 Now, that’s enough from me, what are YOU grateful for during Reconciliation Week 2011?
Posted by Dr Anita Heiss at Sunday, June 05, 2011

On National Sorry Day this year the Governor of NSW, Her Excellency Professor Marie Bashir, opened an exhibition of portraits of the former inmates of Kinchela Boys Home (KBH) at the Fisher Library, The University of Sydney. From 1924 until 1970, between 400 and 600 Aboriginal boys were forcibly removed from their families and placed in the Kinchela Boys Home (KBH) on the NSW mid north coast. The harsh treatment they suffered was documented in "Bringing them home", the report of the National Inquiry into the Separation of Aboriginal and Torres Strait Islander Children from their Families. The photographs in this exhibition are portraits of some of the survivors of KBH who were stolen in infancy, forbidden from speaking their Indigenous languages, brutalised as children, and sent into the world without family or a complete education.
I made these photographic portraits for this exhibition and I am not only grateful, but honoured, to have travelled with the KBH Boys on this part of their journey of healing. As a whitefella photographer I had the honour of photographing the KBH Boys at their reunion at GibberGunyah in 2002, then travelling with them to Kempsey, the site of the Kinchela Boys' Home and making a photographic record of this part of their journey.
I am grateful for the courage and wisdom of the KBH Boys in turning their horrific experiences of the past into a gift for national healing.

I just wanted Thank You Anita! Kylie and I had a blast at your book launch in Deni! We have DEVOURED your book and can both agree you will now go on our auto buy list! LOVED it!
Kylie is far more exotic, by reading her's pool side in Bali (so you will be glad to know your book has made it through customs)
You are such an inspiration and it was such a honour to meet you. Come back to Deni!!
We look forward to following your blog posts.

Have fun promoting your book and take care!

Hi Sarah - thanks so much for sharing your exhibition information here with us and congratulations on a significant project. Peace,
Anita

Hey Diva CJ! So pleased you and Kylie enjoyed and that Libby and I made it to Bali, as it were... I look forward to seeing you girls again for another soiree in Deni! Love it there! Peace, Anita