What I’m grateful for in Hobart: 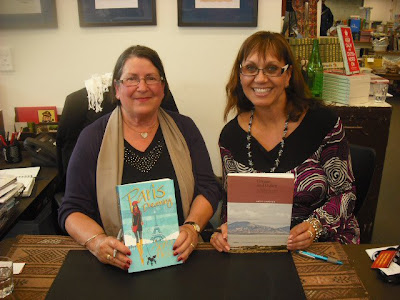 In a whirlwind visit to Tasmania, once known as Van Dieman’s Land and originally named Trouwanna by the local Aboriginal people, I had only 24 hours to catch up with friends, launch Patsy Cameron’s book, try the local fare and appreciate what Sunday morning had to offer in the city of around 200,000 people. And yet, it was easy for me to find plenty to be grateful for.

1. AUNTY PATSY CAMERON: The best part of heading to Hobart was to see my dear friend, Aunty Patsy Cameron. We’ve known each other for ten years and our visits usually include political conversations mixed with shopping! I adore her and was more than happy to head south to launch her first book (see below) because I am proud of her. Patsy is a Tasmanian Aboriginal historian, a cultural geographer, an academic, a basket weaver and someone who has worked tirelessly to improve Aboriginal education in Tasmania. And I’m grateful I do life’s journey with her. 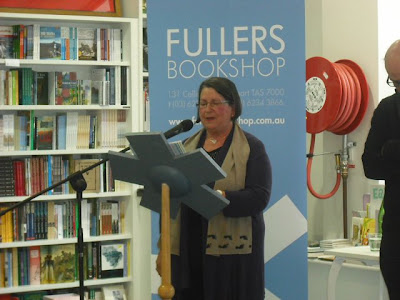 2. GREASE AND OCHRE: Obviously, because of my love for Patsy, I was honoured and humbled to be part of the launch of her book Grease and Ochre: the blending of two cultures at the colonial frontier. When I first picked up this beautiful volume with cover artwork by Julie Hawkins, I was immediately taken by the lines on the back that read: ‘In the early years of the nineteenth century, a small number of European men moved from the river towns of northern Tasmania onto the small islands of Eastern Bass Strait. Taking Tasmanian Aboriginal women as their wives, the Straitsmen set up small-island homes on what became the colonial sea frontier. There have been many interpretations of the result of this blending of two cultures.’

Patsy’s work separates the often recorded history of the ‘sealers as stealing wives’ because her interpretation of the history that sees the Straitsmen as something more than sealers and therefore wide stealers. Rather they were an integral part of the Aboriginal community, they shared the economy, they farmed crops, vegetables and animals. They hunted kangaroo skins, they hunted seals also, all while sharing the living space, and the lives of the local people they had a range of relationships with. Theirs is a history where ‘reciprocity was at the heart of these relationships’.

This book is not just Patsy’s individual interpretation of the history as she believes it to be. Rather, it is based on her years of research as a Masters student pouring over countless primary resources such as the historical journals of George Augustus Robertson, she has analysed architectural surveys, maps, diaries, newspaper articles as well as secondary sources.

But Patsy didn’t just rehash what was written through other people’s eyes, she wrote from her own sense of commitment about a place, a land she has walked and lived, a placed where her own family history and culture is embedded. And through her descriptions of country we get a glimpse of what sounds like a stunning landscape with lagoons, grasslands, woodlands, wetlands, mountain ranges, and wide open plains.

Grease and Ochre is Patsy’s history, but it is the history of Tasmania also, and should be read by the community at large. I hope that all school libraries in this state stock it and I know the glossary, maps, Ricky Maynard photography and historical images throughout will all be useful for unpacking this history in the classroom. I have no doubt that Universities nationally will add it to their collections immediately and the work will become a significant document for use when referring to the history of Tasmania in the future.

3. FULLERS BOOKSTORE: Tasmanian’s #1 independent bookstore, Fullers in Hobart (there’s one in Launceston too) is a relatively new space, fitted out with a huge range of books across genres that you can enjoy reading in their fabulous cafe. As I sipped my coffee on Sunday morning, I felt like I was just where I was supposed to be. By the time lunch time came around, the place was packed! Fullers was also the perfect setting for a launch. I’m grateful to Clive Tisley (below) and his team for their hospitality and for hosting the double launch of Grease and Ochre and my own Paris Dreaming. 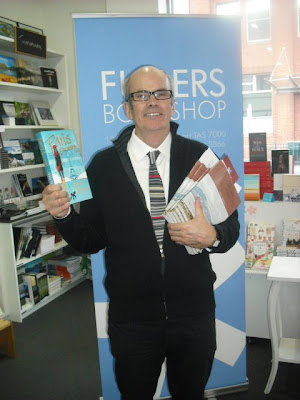 4. JOHANNA BAKER-DOWDELL: I’m grateful for the generosity of spirit of Johanna whom I’d never met other than a phone interview for Manhattan Dreaming last year, and shared tweets, often about our shared love of chocolate. I’m also grateful that Johanna made the trek from Launceston to Hobart on Sunday just to meet me and attend the launch of Paris Dreaming in her state. On top of the trek she also arrived with some delicious chocolates for me from cocobean chocolate in Launceston, and some homemade jam. It felt like Christmas. We also found some time to search out the best chocolate in Hobart as well... see next post!

5. NORMAN AND DANN: Well, what a dangerous place to stop before breakfast! Handmade chocolates, Easter eggs, coffees, teas, and huge chocolate freckles! I ended up restraining myself and only buying dark chocolate covered orange slices/peel. Absolutely delish, and I totally recommend this icon at Salamanca Place when you’re in Hobart. In this note, I am grateful for my willpower, and my waistline is grateful too!

6. FISH FRENZY: Ok, so it’s fair to say that Fish Frenzy is the fanciest fish’n’chip shop I’ve ever been to. I loved my meal served in a brown-paper cone. Like something out of a movie. Highly recommend the local scallops – not the potato kind we’re used to here in NSW – the real things. I’m also grateful for the very friendly service by chirpy staff. 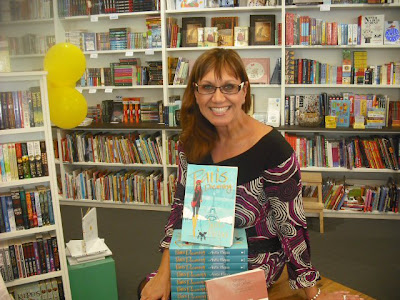