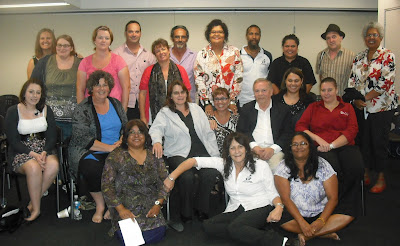 1. FAVOURS: I performed at the Australian Catholic University in North Sydney today. It meant dragging myself away from my desk where I have been chained since November, working to a self-imposed first-draft deadline of my memoir. The thought of ‘losing’ two hours writing time in the middle of the day caused me some anxiety. However, when one of my dearest friends in the world, Kerry Reed-Gilbert had asked if I would speak as part of the ACU Indigenous Staff retreat, there was no way I could or would say no to such a favour. Kerry is a sista who has been through thick and thin with me for almost twenty years. She has done me too many favours to count; let's face it maths isn’t my strong point. To my utter surprise in my completely mentally distracted state – I had an absolute ball! I enjoyed every minute of my time ‘working’, I met some beautiful people AND caught up with a handful of wonderful friends who have been part of my life in various stages in the last two decades; as a student, as a colleague and as a writer. I walked away feeling like I’d been done the favour, and for that I am grateful.
[Pic above of the ACU crew today]

2. MUSIC: It’s well-known in my world that my taste in music is lacking. I asked my brother to buy me the Black Eyed Peas and Michael Buble for Christmas because I didn’t have them. I don’t have much else either. I don’t really have time to listen to music except when I’m in the car or cleaning. I can’t have noise when I write and when I’m home I’m either ready for bed or catching up on the news. OK, so that was a long intro to say that today I am grateful for the gift of music. Direct from The Commissioner in Cairns was the surprise of Mary J Blige’s 'Stronger With Each Tear', and with the roof down cruising to work this morning, indeed Mary and I were!

3. MORE MUSIC: Also in the post today - as if my friends were in cahoots - and all the way from Cataluña, was Cigala & Tango’s latest offering 'Diego El Cigala' recorded live at the Teatro Gran Rex in Buenos Aires. The CD also comes with a gorgeous book, and while the text is in Spanish there’s gorgeous black and white photos taken during rehearsals, so I can read the story through the images. I am so incredibly lucky, and it’s not even my birthday. I am grateful to my friend Julie for her generous gift which carries me back to El Born with afternoons full of laughter, storytelling, bubbles and macaroons!

4. RESEARCH: On Sunday I begin my research on the new novel in Brisbane. I’ve got a team of ‘researchers’ lined up to assist with finding local ‘characters’ in Paddington, Kangaroo Point, West End, St Lucia and everywhere in between. I’ve also go my muse flying in… so drop by here on Sunday and you’ll get to meet him. I’ll be blogging our ‘research findings’ also, so hope you enjoy the ride.

5. RESPITE: It’s fair to say that right now I am brain-fried from sitting and writing endlessly for the last few months – working on the memoirs and final pages for Paris Dreaming (which will be released nationally on April 1st!). What some mightn’t realise is that being mentally exhausted translates into being physically exhausted, so I I’ve scheduled in an hour-a-day respite when in Bris-Vegas. Respite is defined as a temporary rest period. I’ll be having mine by the pool. And I am already grateful!
Posted by Dr Anita Heiss at Thursday, February 24, 2011