Review: My Home in Broome 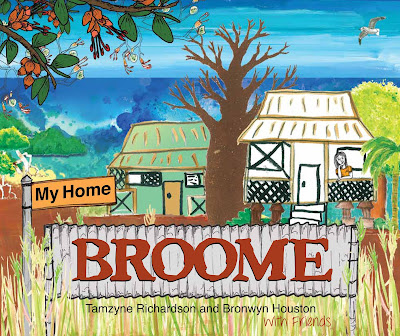 As I count down the sleeps till I head to the Corrugated Lines writers’ festival in Broome, I am grateful for this beautifully illustrated book to get me up to speed on what I can expect when I arrive on the land of the Yawuru Aboriginal people.

When many think of Broome, they consider the pearling industry, the camel rides along the beach, remarkable sunsets and cuisine that marries the best of the Australian coast with Asia not far away. But as this colourful picture book proves, there’s much more bubbling within this coastal paradise, from its rich history, it’s diverse population to its local ecology.

My Home Broome explains the six seasons of the region, the meaning and history of the ‘Shinju-Matsuri’, some local Yawuru bush-tucker names, that the bush fruit yaminyarri are one of eh greatest sources of Vitamin C in the world, and that Broome once had it’s own dinosaur, the meat-eating Megalosaurus broomensis!

Kudos to Tamzyne Richardson (descended from the Yawuru and Bardi people of the Kimberley region) and Bronwyn Houston (descended from the Nyiyaparli and Yindijibarndi people of the Pilbara region) who worked with twelve talented students from Broome’s primary schools – as part of a publishing project celebrating the cultural diversity and talent of the Broome community. The students learnt a range of techniques to produce illustrations inspired by Tamzyne’s poem and the richness of Broome’s history and it’s people. In short, the final work gives a colourful and intimate insight into what the coastal community has to offer.

Thanks to My Home Broome I’ll be looking for a number of things when I get there next month, namely some gung-gara, the ‘Staircase to the moon’, an Australian white ibis or two, and I’ll be checking out the Courthouse markets and of course, one of my favourite publishers Magabala Books!
My Home Broome is available now direct from Magabala Books  or from Booktopia and don't forget to ask your local and school libraries to order copies in as well. It doesn't matter if you can't to Broome, you can still escape there via this gorgeous book!
Posted by Dr Anita Heiss at Sunday, July 15, 2012

The cover of this book makes me want to read it Anita. It looks fabulous and thoroughly enjoyable.

The artwork throughout is a real treasure Cathy. And the work in total a fabulous advertisement for the town, not that that was the aim of it. :)