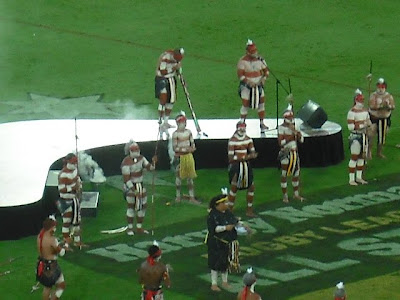 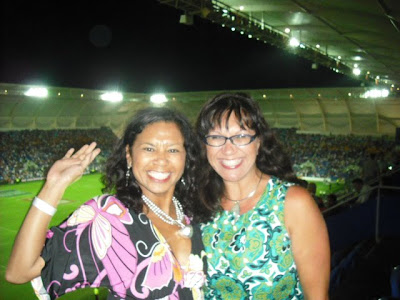 February 14
1. INDIGENOUS ALL STARS: Look, I’m the first to admit that I have little interest in or knowledge of any code of football. And that’s quite sad given my cousin Joe Williams used to play for Penrith and Souths, my other cousin Jim Williams used to Rugby play for the Brumbys and now is assistant coach for The Wallabies. But last night I do believe I was converted to the game of League as I sat with over 26,000 other spectators at Skilled Stadium and watched culture, entertainment and sport mesh into a history making moment. I’m grateful the IAS won! There would’ve been mass mourning on my flight home today otherwise. A highlight of the night was of course the Noonuccal Dancers from Stradbroke Island. (see pic)
2. FROCKS AT THE FOOTY: I’m grateful that I was there for the purpose of work and therefore got to hangout in a suite which came with a dress code. It meant I had to frock up and put on some heals. It was stiff competition though as I met up with Ms Sonja Stewart and the ever glamorous Terri Janke. Rumour has it that TJ was sitting near the Prime Minister at the game! [pic of TJ and I at the game]
3. PLANES THAT LAND: I’m always grateful when the plane I’m on lands safely, especially when it’s an airline I wouldn’t normally fly...
4. GEORGE THE CONCIERGE: I’m grateful for George at Legends Mantra who provided exceptional service in an otherwise, unexceptional check-in experience on the Gold Coast. Next in line was Brodie who rescued my wallet from the in-room safe... you’d think with all the travelling I do I’d know how to work the safe by now, but apparently not!
5. WATER: Just can’t enough of it. It’s my favourite drink.
Posted by Dr Anita Heiss at Sunday, February 14, 2010

Hey Anita, The All star game was unreal, love my footy, I`m a dragons fan all the boy`s made my night, they should have it all the time , I`m glad that you went to the game and enjoyed your self, and now you will have to follow the nrl now , lol, love your blog alway`s , have a great week looking forward, for more, take care sweetie , love liz :)

Love the company you keep. Ms Heiss. Thanks for sharing. I'm taking notes!

Hi Liz - yes, the game was AWESOME!!! I didn't really know who any of the players were but I was super impressed!
Hope you're having a sensational start to the week and the weather is perfect wherever you are! Peace, Anita

Well Ms Barbara - seeing as I keep company with YOU too, then you should love it! See you next week in Perth, YAY!! xx

Hi Anita,
As I watched the game and enjoyed a fabulous contest, I thought of you and tried to imagine the atmosphere and your reaction to it, my feelings were that you would enjoy the game as much as the occasion , it seems you did !

Hi Tez - I had a great time. I don't really know the rules, but there was so much positive energy it was hard not to be infected by the passion and excitement of it all. And the entertainment eg dancing was fantastic. I may have to go to another game sometime! I assume you enjoyed it all as well. Much peace from the easy, Anita

Perhaps you could speak to cousin Jim , with a view to making the second match you see is the other rugby code ( Joe played rugby league and Jim played rugby union - and yes, there IS a difference !)
btw..., I think your cousin JIM also PLAYED for the Wallabies - at least a few games , no mean feat in itself and worth mentioning if you want that seat at the next Wallabies game !

Yes Tez you are SO right. I should go see a rugby match. And yes, Jim did play for the Wallabies, am very proud! I should get to a soccer match (the real football) sometime in 2010!

Surely, Jim should get me a box eh???