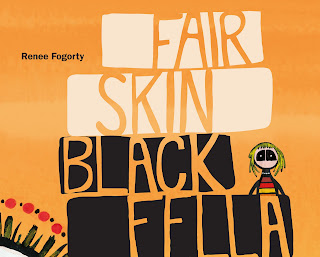 It was the title of Renee Fogarty’s Fair Skin Black Fella that first caught my attention, as I was preparing to put together some resources on teaching Aboriginal identity without stereotyping for educators in Canberra. I know only too well from working with Aboriginal kids of all colours, shapes and sizes around the country, as well as being born into a bicultural family myself, that skin colour does not define one’s identity.

Fogarty’s colourful children’s book speaks of her own life experiences as a ‘fair skinned’ Koori in Sydney, although she is from the Wiradjuri people of the Lachlan River in New South Wales, and her young character Mary lives on a dusty red cattle station. I assume this cattle station is in NSW also, as there is a peppering of Wiradjuri language words throughout, but while the images are intriguing they don’t necessarily reflect a contemporary lifestyle – even on the land.

Regardless of location, the experience of racism – white on black, black on black, and black on white – is sadly, universal. In this story young Mary is suffering from simply looking different to the other Aboriginal kids. And I have no doubt many will relate to this very short tale. Thankfully though, there is a positive, helpful ending, because just as kids can learn the nasty aspects of life from adults - kids aren't born racist they learn racism from adults - so too, can they learn from the wisdom of their elders, and that when they are taught that identity comes from family, community, country, culture and spirituality, then pigment becomes irrelevant.

What began as a project while in Year 12 has turned into an important resource for the home and classroom as it uncovers the racism that is painful and common amongst children, and even amongst our own at times. Terms like ‘half-caste’ from the past – designed by Governments to water down and disconnect Aboriginal people from their identities, communities and culture – have in some cases been picked up by blackfellas also.

The general concept and message of Fair Skin Black Fella however remains, and that is Aboriginal identity is not about the colour of your skin. As Old Ned says: ‘We all brothers and sisters in this life, now matter what colour we are.’

I have a copy of this book and have recommended it to the librarian at my children's school. I love Renee's paintings and I am also inspired that she was able to share her experiences in a way that is so accessible to young children.

Part of what I love about the community of friends I have established online is that appearance (skin colour, accent, hairstyles, clothing) is not a factor. Relationships are formed based on personality, character and interests, the real substance of a person, rather than superficial aspects.

So glad that you came across this book and that you enjoyed it.

Hi Susan! I love Renee's paintings too. Can't wait to see what she puts out next!

I'll be recommending this book to educators in the ACT on Monday for sure.

And like you, I've found those I share with in cyberspace allows me to connect on a professional, political and chocolate level. Not about the irrelevant and superficial, as you say!

Much peace this Friday!

I'll keep an eye out for this one.
Yes, it's out there.
I was filling in my paperwork for a mammogram last month & the clerk told me I'd made a mistake when I'd ticked 'are you of aboriginal/TI ancestry'.
I had to explain to her that even though I may be fair-skinned, this is a MEDICAL history and we have a host of medical issues in my family that affect indigenous people at a higher rate than other populations.
Skin colour may fade but DNA coding in genes get passed down in perpetuity.
Our kidneys and our hearts are all the same colour.