What I'm grateful for today 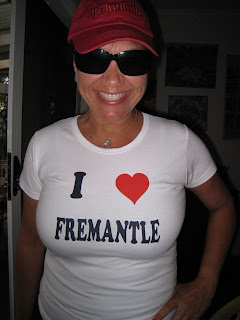 December 26
1. The Boxing Day sales – four dresses at bargain prices mean I’ll be sufficiently frocked up at least for the next few weeks!
2. Random conversations with everyday people who make standing in queues bearable. Had a good yarn with the women waiting for change-rooms at the sales.
3. Frane’s sense of humour – although she does get us in trouble at times... like when she burst into an occupied change-room today, AND when she stuck her finger up the nose of and groped a mannequin in Myer, and then insisted on throwing balls around Rebel. Luckily, she’s also good at flirting with sales staff –of both genders – and security was never called!
4. Frane’s husband Mark – he drove us to the beach early morning for our walk. He makes coffee for us too. I guess that’s what husbands are good for. I really should re-think getting myself a husband shouldn’t I? They can come in handy at times it seems. Especially for preparing the spa in the afternoon. Maybe I’ll get one at the Boxing Day sales next year.
5. Afternoon naps... you don’t have to be a nanna to enjoy them.

December 25
1. Waking up in Fremantle. I love Fremantle – see photo!
2. Christmas morning walking along Port Beach. I have never seen so many single fellas walking dogs, anywhere in the world. I think I might have to get a dog, even though I don’t really like dogs. But what a talking piece they are. And probably less work than kids right? Except that thing you have to do with the plastic bags when they poo. Really, I’ve never seen so many dogs pooing in one place. Do they wait to go to the beach to do that? I should do some research before I get a dog, right?
3. The most sensational Christmas day. I had always dreamed of having a white Christmas, but I didn’t really mean with a white family. But they were really, really lovely and really kind to me, and didn’t ask me to play the didjeridoo, or speak in language or to put ochre on. I ate turkey with cranberry sauce and profiteroles with chocolate sauce and cassata (Mark’s mother Lynne is a genius in the kitchen!). I can’t cook, well I can cook, I just need a cook book right? So to rephrase it, I should say I don’t like cooking, but I’ve learned that to be a hit at a party, just take a couple of bottles of French champagne and a jar of hibiscus flowers and voila! Instant star! Sometime later in the day it helps to have someone casually mention that you’re a best-selling author and then no-one cares whether you can make muffins or not! And so they shouldn’t. I think I’m coming back here for Christmas next year, I’ve adopted myself into this family.
4. My friends Frane and Mark are very generous and kind, and good looking (I think they are reading this...) And they are sensational authors / illustrators! Check their work out at: Frane and Mark
5. The beautiful gifts I received. My I LOVE FREMANTLE tee-shirt and red cap. New York New York tee-shirts. My Tiffany’s bracelet to inspire the next book Paris Dreaming. My Vera Wang PRINCESS perfume. I was / am so so so lucky.

December 24
1. My brother Mark getting up early to take me to the airport. Let’s face it, he’s 13 years younger than me and is never going to catch up on all the rides I’ve given him over the years to the movies, the beach, his mate’s place, school, the shops etc. And he doesn’t have to, but it’s really nice to have him pick me up for early morning trips to the take flight.
2. The QANTAS steward as I boarded the plane asked ‘Are you going to a wedding, you look very glamorous. Did you have your hair done?’ Not sure if the taffeta dress and baby’s breath gave it away (kidding!), but I was grateful for the compliment.
3. The young guy who kept looking and smiling at me from across the aisle. I think he thought I was someone else...someone famous like Kate Ceberano perhaps. Or Rachel Berger is another I’ve been mistaken for in the past. Either way, I didn’t mind being considered fit for a wedding or potentially famous!
4. My punching buddy Frane Lessac met me at the airport in her Lexus – which I hate to say – that she can't actually drive very well. We nearly cleaned up a traffic warden before we’d moved 20 metres. But that’s only because she’s such an attentive friend she looks you in the eye when she talks to you, even when she’s driving. She looked fabulous sitting there with her flashing reindeer antlers on as she drove back to Fremantle. I’m glad she took them off when we went to Salt to meet another fabulous woman Verity James for some Christmas bevvies.
5. Dinner with Frane, Mark and friends at Maya in Fremantle – where the trivia I learned that night was ... In a room of 30 it is highly probable that two people will share the same birthdate. Do some research next time you’re at an event. You’ll be surprised what you find!

1. My brother Joe being an absolute maniac when it comes to weight-training. Even when I can’t do the exercise for my lats, or was it my delts, he just keeps pushing, then laughing and calling me a whinger for complaining. No matter how desperately I try to get out of an exercise – ‘I need to go to the bathroom, I think I heard the phone, is that one of the kid’s crying’ – he just won’t let up on me. He’s a hard task master... and it’s a good thing, even when I can’t move my arms or even sit down for days afterwards.
2. Chocolate (which is the main reason I have to exercise) – really, chocolate is a staple in my diet. It gives me energy. It has caffeine. It makes me happy. And it tastes sooooo good.... Last count, I had already received three boxes of chocolate for Christmas. I asked my mum ‘Why do you give a fat person chocolate?’ She said, ‘Because you like chocolate!’ Of course, she should’ve said, ‘You’re not fat Anita!’ Anyways, every Christmas, birthday, Easter and Valentine’s Day, without fail, my mum gives me a box of Lindor Balls (red) because I do in fact, like them. I like chocolate ice-cream, chocolate biscuits, chocolate cake, chocolate covered almost anything! My name is Anita Heiss and I am a chocoholic!
3. Time to hang out with Phillipa enjoying the Pacific Ocean, the smell of summer and catching up on who’s doing what, who’s doing what they shouldn’t be doing, and what we’re both going to be doing in 2010. Someone was on MY rock at the pool, which turned out to be something I am grateful for! I was forced to find a new spot to sit for the first time in years and so a new view of the pool and people. And it’s all about observation for me... pen always mentally poised in my head seeking out new characters, so I spy the men in Speedos, the women proud of the their stretch marks, and teenagers having fun.
4. My new metallic bag – well it’s not really metallic, it’d be too heavy if it were, but it’s got this metallic look about it, which doesn’t really sound fashionable, but you know what I mean. Mum gave it to http://www.blogger.com/img/blank.gifme – with my Lindor balls – for Christmas. Currently holds my laptop, latest novel by Larissa Behrendt –Legacy - and all the makeup I need to look ready for public exposure when I head to the airport!
5. Mum (Elsie). Not only does she ply me with chocolate feed me whenever I don’t have food in my own house, provide a place to always feel loved, secure and at home. She’s the best mother you could ask for.
Posted by Dr Anita Heiss at Saturday, December 26, 2009