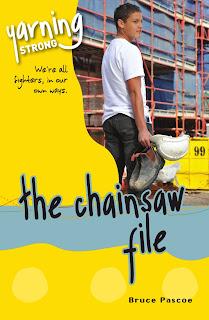 ‘What other people think doesn’t decide who you are.’

When it comes to being selective in the history you believe about Australia, or if you choose to racially stereotype people, then there’s every chance you’re going to be challenged by someone passionate and smart enough to have a go. The question for the challenger is: which fights do you pick and with whom? Bruce Pascoe’s The Chainsaw File answers these questions through the story of Tyrone Smith who’s suspended from school for questioning his teacher Brooksy about Captain Cook ‘discovering Australia’ only to find a new challenge on the building site his father takes him to as punishment.

The Chainsaw File opens with a comment about segregation in Australian history and the Freedom Rides lead by the late Charlie Perkins, and closes on the way in which some people still insist on ‘measuring Aboriginality’.

Told through the voice of young Tyrone (otherwise known as ‘Smith the Stirrer’ at school), who appreciates the girls, especially Faye Knight and always compares himself Easy Thomas (Easy was handsome; I had a head like a twisted thong) we get a glimpse into how life is different between generations of Aboriginal people, often because of the ‘privilege’ younger people have in terms of access to education and the freedom of thought and speech we enjoy today to those back in the 60s.

The big questions confronting Tyrone, and therefore his family, involves his need to challenge his teacher at school and then his father once the building site lingo and conversation uncover a racist brickie known as Boxer, who talks about ‘bush abos’ drinking, taking drugs, stealing and beating their women. Boxer (known for his bouts and obviously too many punches to the head!) quickly amends his rant with a comment to Les, Tyrones father: ‘But you’re not like the rest of them.’

This is a fast paced, punchy story about the differences between ‘knowing’ something and ‘understanding’ it, especially in terms of our own family history. It’s the perfect novel for use in the classroom and comes with a play adaptation in the Identity anthology as part of the Yarning Strong series. You can also purchase The Chainsaw File guided reading pack.

Bruce Pascoe is the author of 25 books, many are novels I have devoured over the years. His Ruby Eyed-Coucal made me wonder if I could ever write as well as Pascoe. His most recent adult novel Bloke gave me a fairly –at times scary – insight into the male psyche, especially in terms of women, oh, and fishing!  But it is his latest effort, The Chainsaw File that I think will have the most impact, especially as it targets a younger Australian reading audience and reinforces the notion that Aboriginality cannot be defined by skin colour.

I really cannot wait to read this! A great review, but what a fantastic resource!

This one looks really interesting, and a fascinating read. Am definitely adding this to the list. Thanks Anita!

Thanks Sandy and Emma - I think this book will do well in schools in terms of engaging specifically young fellas, but also generating discussion. Cheers, Anita

The Divorced Lady's Companion to Living in Italy said...

I was published by Bruce Pascoe years ago, when he was doing the Australian Short Stories series. This sounds like a good one for my culture-truths-hungry youngest son!

Thanks for dropping by DLCTLII! :) I have no doubt your son will get something from Bruce's latest effort. Peace, Anita


Chainsaw gives a very high performance, it's great to have it in the house.
try here