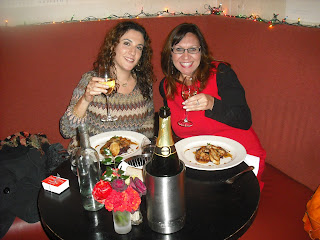 Many people have asked me why, some have frowned at me and others just don’t understand how I could be away from my family at Christmas. The truth is I do miss my family, but I see my Mum and my sister Gisella and her boys every day back home. I eat with them often. And to be honest, Christmas to me since my father passed away has been a struggle, and often just about eating more, spending more and, sometimes with more chances of a family argument. I’m not really religious and I don’t have kids – which many people tell me is what Christmas is really about – so I’m the Aunty who is usually pouring a glass of bubbles before midday. I wanted something different for myself this year. In fact, I was happy to skip Christmas altogether but that’s near impossible to do that in the Western world. After my scheduled events in New York (as mentioned below), I decided to stay on for a unique New York Christmas, and here’s the five things that made this year so memorable for me.

1 FALLING STOCKINGS: I wish I was talking about Santa stockings here, but alas I’m talking about the stockings that I was wearing as I headed up 5th Avenue at 9am on Christmas morning. No sooner had I made it to 25th Street  that I was hoiking my tights up and feeling very flustered, embarrassed and uncomfortable. I had to hail a cab before they actually hit the top of my boots. While making small talk about the lack of traffic and how many people might be at the cathedral I was heading to, I tried desperately to get my stockings in an acceptable place. No such luck. To cut a longer and more embarrassing story short, I ended up being escorted in the direction of the bathrooms at the Rockefeller Centre by a police-officer, most concerned about my failed stocking situation. Never, EVER have I had a Christmas day start like that. Nor had he!

2.       MASS AT ST PATRICK’S CATHEDRAL: I had decided before I left Sydney that I would do certain things for my family while away. I chose to go to mass at St Patrick’s Cathedral for my mother. The homily was a reminder about what was / is important at Christmas  – especially the gift of time. I was grateful I attended the service with my friends Jeanine, Jerome and Rosie. Indeed, we sat through half of the 9am mass and most of the 10.15 mass so I think I’m covered for a few months now. Trivia: so popular is the midnight mass at St Pat’s that you have to book a ticket, and my cab driver told me that mass this year (well now it was last year) was the largest they’d ever had.

3.       BLAUE GANS: Prayers were for Mum, but filling the belly was for Dad, and for that I headed to one of five Austrian restaurants I knew of in NYC. I had Christmas lunch at the Blaue Gans in Tribecca with my dear friend Vanessa (picture above), a cocktail named Klimt (after the famous and fabulous Austrian painter), roast duck with red cabbage and pear strudel  for dessert - it was a fitting tribute to my late father. The difference between this lunch and the one I would’ve had back home is that I didn’t eat too much and for being able to walk easily out of the restaurant I was most grateful.

4.       THE ROCKETTES: Everyone, and I mean everyone who visits this city during Christmas time heads to see the Rockettes Christmas Spectacular at Radio City. And so, I got my Christmas belly on the train and up to the theatre to see the high-kicking Christmas story, including Santa, a nativity scene and a reminder that the spirit of Christmas is togetherness, and not necessarily presents. I was grateful that in such a commercialised Christmas show, that message was made loud and clear, as much to the parents in the audience, as the children.

5.       PRESENCE NOT PRESENTS: Christmas 2011 will go down as one of my all time favourites. Although a long way from home, I was most grateful  on the day to be able to spend time with wonderful people (also had dinner at The Australian Hotel later that evening with Aussie mates). Their time and presence were much more important to me that day and than any physical present.
Posted by Dr Anita Heiss at Thursday, January 05, 2012

I'm so jealous of your New York Christmas! I'm planning to do the same in 2013 and stick around for New Years Eve in Times Square to watch the ball drop.

Trip of a lifetime :)

I think I mentioned to you via Twitter that my brother (his wife and my niece) were in the US at Christmas and also in NYC on Xmas Day. Like you they went to the Cathedral and saw the Rockettes (which they also loved).

As a non-religious non-parent I completely understand what you mean about Christmas not really being anything special. And, my father passed away just over two months ago, so this past Xmas I spent the time with my mother doing not-so-traditional things.

I've had a few Christmases alone / away from family while I lived o/s and actually one of my favourites here in Oz was spent with my best friend, in an apartment on the beach (while my brother, his family and my folks did the in-law thing - which I'm usually expected to join... for some insane reason!).

My bestie and I walked on the beach early and opened the champagne as we unwrapped presents and watched retro music video clips. *Sigh* (Happy memories).

Blondie - thanks for yours. I will be doing a belated blog on New Years Eve so you can get some tips of where to go for your dress and your dinner / drinks :) Coming soon. You will have a blast! Happy happy new year!

Rockefellaskank - thanks for sharing your Christmas thoughts as well. I firmly believe Christmas is as special as you wish to make it, and the friends / family you share it with. Much peace to you and all the best for 2012!