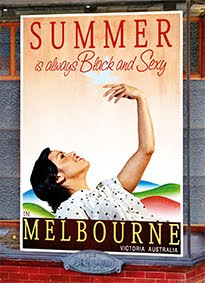 What a treat to take this volume to bed last night. It’s a very good-looking book, I must say. And in this quality-produced volume by Illura Press there’s a diverse collection on writings (short stories, poetry, book and music reviews, and interviews) and visual art that makes me want to pick up a paintbrush and a camera myself.

In terms of what I went for first – the literature – the opening story ‘White Ants’ - set in Coober Pedy and penned by Ali Cobby Eckermann is so detailed, it made me wonder if it and the characters were real. She’s followed by the poetry of Nellie Green who is multi-talented in the arts, and has paintings later in the volume. I could see her ‘The Stars Fade Mysteriously’ fitting quite well in my own home. But I digress… back to the words…

I was pleased to read Janali Jones’ poetry, but the lawyer also writes fantasy and science fiction, and I think her work in those genres would’ve added much to this collection of writing.

Kellie Wyatt’s ‘Meeting My Dad’ is another powerful reminder of the impacts of protection policies and how they still play out today. This is an honest account of how sexual assault on one innocent young women in northern WA means that Wyatt is still getting to know her own father decades into her life.

Den-The-Fish from Cherbourg writes in his poem ‘What’s Gone’ about the different perspectives Indigenous people and non-Indigenous people can have when looking at exactly the same landscape.

I was more inspired than ever to read Tony Birch’s Shadowboxing after reading his short-story ‘Distance’, which is a stark reminder of the mentality behind the NT Intervention and the mindset of many Australians still, particularly in country towns. Birch’s use of dialogue really drives this story and kept me engaged.

I’ve been a fan of Brenda Saunders' poetry for a long time, and used it in my teaching, but I hadn’t read the work she published here before. In her poems ‘Jaandoo’ and ‘River Story’ she pays tribute to the painters Rover Thomas and Ginger Riley Munduwalawala respectively.

One of my favourite, lighter reads was that of Shirley Morgan who opens her ‘Fifty, female and taking flight,’ with
This is a travel manual for women who enjoy their own company and long to fulfil the gyspy within. I would like to clarify that I am a black woman and that not every black woman’s story is of disadvantage.’

And thank God they’re not!

Shirley’s article is full of inspirational travel tips as she boards her first of many flights to the US at the age of 51 and she’s flying solo. Her friends think she’s just ‘hormonal’ but Shirley responds: ‘If this is a mid life crisis, bring it on.’

In terms of visual art in Indigenous Etchings, there are emerging alongside more established ones, but in all honesty, it’s the contributions of the students from Goulburn Ovens TAFE students and their lino prints created at the Centre for Koori Education that stand out for me as exceptional. They make me want to enroll myself. It won’t be long before these prints hang on gallery walls and appear in coffee table art books – if not already.

From the cover of the collection, Bindi Cole’s posters are clever and original and her invention of ‘Koorimite’ [Koori-Vegemite] will be popular with many.

There’s stunning black and white portraits by the 2009 NAIDOC Artist of the Year, Wayne Quilliam, very artistic shots by Stephen Rhall, whom I’d never known before now, and brilliant lively photos by Elizabeth Liddle, my favourite being ‘Sideshow Alley, Clowns.’ It’s full of life, colour and memories of my youth.

Always interesting to read interviews, and in this collection we meet Kim Kruger, Project Manager from the Michael Long Foundation, AFL star Nathan Lovett Murray who talks of his new venture Payback Records, established to give young Indigenous young people a voice through hip-hop music. The third interview is with playwright John Harding who talks of his role model Jim Everett (deadly Tasmanian writer /poet) as the ‘second ever Aboriginal playwright after Jack Davis’ who of course, was the godfather of black playwriting. Unfortunately, this comment ignores the groundbreaking work of the late Kevin Gilbert who wrote the Cherry Pickers in 1968 and was the first Black playwright to have his work produced.

What I love most about this collection is diversity of style, voice, and medium which comes from the diversity of backgrounds the two dozen contributors come from. When these artists are not writing or producing visual arts, they are lawyers, academics, managers, public servants, consultants, mothers, grandmothers and so on.

And they come from all a range of Aboriginal and Torres Strait Islander nations and language groups: Western Arrernte, Gunditjmara, Warri Yamatji, Kamilaroi, Badamyaya, Wathaurong, Wiradjuri – to name a few.

What some might find a problem with this collection is where to start! The good thing is you can dip in and out of it whenever and wherever you like, and there’s something for everyone. Some may even be heard to say they bought it just for the pictures!
Posted by Dr Anita Heiss at Tuesday, March 30, 2010