What I'm grateful for this weekend... 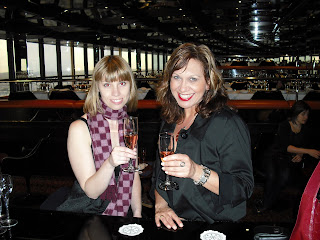 Sunday January 16:
1. MEN: I am lucky to be surrounded by strong, respectful, intelligent, reliable men. Some are family, some are friends, and some are colleagues. I don’t expect them to flirt with me, obviously. So, it was a nice treat to have two men flirt with me at the petrol station this morning. I thought the first fella who winked, smiled and eyeballed me may have been to the early opener at Botany, so just let it pass without a second thought. But when a second did something similar I thought, well maybe I brushed up all right for a Sunday morning. Unless of course, they’d both been to the early opener!
2. KIRSTEN: I had brekkie with an old friend this morning. Kirsten was my ‘on the ground’ researcher in Canberra for my new book Manhattan Dreaming. In fact, the character Kirsten in the book is in honour of her friendship, but any naughty behaviour of the character does not reflect my lovely friend. I simply stole her name for the character in New York. Kirsten also helped me research a travel story on the Capital that’ll be published in the Sunday Telegraph soonish.
3. FRENCH HOUSE: Today Kirsten and I we went to the French House in Danks St, Waterloo to reminisce about our time in Paris. Oolaalaa, it was délicieux! The pic above is of Kirsten and I atop the Tour Montparnasse in October 2008.
4. LUNCH @ THE CLOEY: yes, it does seem like all I do is eat! It’s true. I do. I like food. And I like good company and today I had both for lunch at the Clovelly Hotel. The pub was my old stomping ground back in the late 80’s early 90s when the Broken Watch Band used to play there Sunday nights. Now I’m an older boiler I’m only there in daylight hours. Today I had lunch with someone I admire greatly. Ms Georgia Blain , author of one of my favourite novels Closed for Winter. Check it out this summer. I read it lying on Maroubra Beach in 2005.
5. SKYPE: how good is this technology? I often Skype friends in WA, Spain, the USA and the UK. Ok, I also Skype a friend in Narrabeen. Yes, we could use the phone but it’s nice to see the person you’re talking to isn’t it? Although, one must actually put something respectable on when doing that. Sometimes I even get dressed up – full face of makeup and tiara! A girl likes to feel nice, right?

Saturday January 16:
1. THE STEPPER: A personal trainer said that doing the stepper at the gym was the best thing to improve my derrière, so I stepped this morning. I’ve been stepping for months, but I don’t think its working. But I’m grateful for the ability to step and step and step and yet not really climb anywhere!
2. YOGA MAT: Well, I’m not doing yoga but it’s nice to lie on the mat on my lounge room floor watching telly. Ok, so I do a couple of girly push-ups occasionally. And the odd crunch.
3. DETOXING: I have been doing the annual detox and haven’t had an alcoholic bevy since January 4th. I was grateful to wake up feeling clear headed this morning, if not still a little full from the dinner party last night.
4. BROOME STREET: it’s a massive hill I climbed with my sis Sonia tonight. I hope it helps a little more than the stepper! Not to worry, the inspirational yarn was a good workout for the mind, and that’s just as important –if not more!
5. CONTROLLED ANGER: I bought a wireless modem – Netgear G – which at first glance appeared to be quite simple to set up. It wasn’t though. I don’t know why. I am IT illiterate, and so I did what I usually do and called my provider (iinet) but there was a 40 minute wait. Did I want a ‘call back’? No. I was angry, very angry. And yet, I didn’t throw the modem anywhere or into anything. I am grateful for my ability to simply sigh and walk away (until the next attempt I make to set it up).
Posted by Dr Anita Heiss at Sunday, January 17, 2010