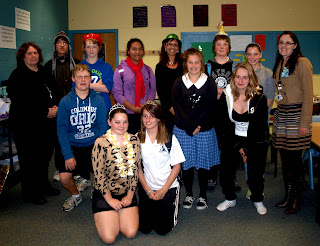 I was recently invited to Canberra to do what I love most - deliver workshops to students and educators. Coordinated by Cara Shipp, my first stop was working with the Year 9 Advanced English Class at Wanniassa School. Within our two-hour jam-packed session the motivated students created characters / settings and brainstormed / wrote about Australian Indigenous society and culture. I was impressed and inspired by the diversity of voice, range of ideas and quality of output given everything was a first draft. I’m pleased to share here today, some of the words penned by the group (pictured above).

Spears sailed through the air
They pierced the kangaroo’s heart
They feasted on him.

Hunters search for food
Birds, kangaroos and wombats
They use boomerangs.

Truganini
By Jasmine, Jaymee, Eloise
She was a true Tasmanian princess
She was rebellious, wild and free
She was understandable, a uniter
She was the gatherer of many
She was acceptable, yet aggressive
She was natural and pure
She was impassioned in her cause
She was noble, she was native
She was idealistic, an icon for Aboriginals
She was Truganini.

Untitled
By Courtney and Gwynneth
The sun radiated off the glistening riverbed as a kangaroo sprung by with a mysterious look in its eye.  We spent our day in the desert-like bush telling our tales of the dreamtime.  In the distance the kookaburras sang gleefully as our bush ticker slid into the depths of our empty stomachs.  The children bathed in the murky shallow waters as dawn fell upon us.  The stars shone through the overgrowth as we gathered around the intensely hot campfire.  Sharing stories once again.

War
By Sarah and Karen
Aboriginal soldiers fought for our country,
And came back as one of the boys,
They came back and were treated poorly,
As if war was a game, and they were toys.

Not bad for first drafts, eh? 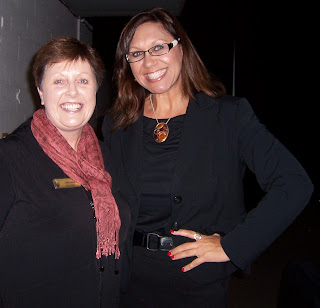 The next day I delivered a keynote address at the ACTATE annual conference titled “Sharing the Secrets of Success”, where I spoke with English teachers from across the Territory working in state, Catholic and independent schools. As always, the chance to engage with those developing syllabus was of huge interest to me, and I relished the opportunities to share with them some important resources to make delivering Indigenous Studies easier, more effective and with efficient.

I was pleased also to reconnect with teachers I’d met previously including Lynn Price (with me above). Lynn’s an EALD Teacher and Aboriginal and Torres Strait Islander Education Contact Officer at Weetangera Primary School. I had the good fortunate of working with Lynn’s students in 2011 and blogged about some of their work following a two day workshop in Canberra.
I’m pleased to hear that many of the conference participants have since followed up my suggestion to access and utilise BlackWords: Aboriginal and Torres Strait Islander Writers and Storytellers database.
This year was my second appearance at the ACTATE conference; let’s see if I can make a hat-trick in 2013!
After hours: While in Canberra, and because I travel a lot and lose the momentum of exercise, I went out of my way to find a local gym, and I feel compelled to say that the Southern Cross Health Club is one of the best gyms I have ever visit. And that’s coming from someone who’s had a number of memberships to various clubs in the past twenty years. Kudos to the very friendly staff there, and thank you for a very pleasant (albeit exhausting) exercising experience.
Finally, following work and exercise, one must relax, unwind, debrief, and for that I thank my local friend Kerry Reed-Gilbert for breaking bread (and eating pasta) with me at the incredibly hospitable Bellucis in Woden.


Who said Canberra was all roundabouts and politicians?
Posted by Dr Anita Heiss at Tuesday, June 05, 2012