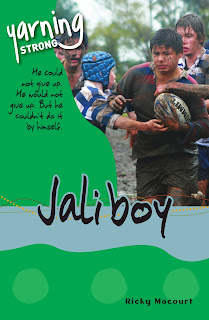 He was a warrior at heart, that Jali boy. But unlike the stories of his ancestors, his story was one of struggling to find out who he was, in a world he wasn’t sure of yet.

The chapter headings of this YA novel - Regrets, Struggle, Sent Away, Darkness – are what struck me immediately for a story about a fourteen year old boy. But the headings appropriately reflect the pain and emotion of a young Aboriginal fella trying to be the man he knows deep down he can be, but is yet to prove.

Jali Williams is a loyal, strong spirited kid, who loves his family, and wants to be there for his younger brother Kain. But like many teenagers, Jali is misunderstood by his teachers and his peers and while he thinks about staying out of trouble he knows it’s not ‘hard for an Aboriginal boy to find himself in a whole world of trouble. That was how the world saw them, Aboriginal boys making trouble. That was how the world worked.’

While managing her leukaemia, Jali’s mother Marlikka is raising her sons alone. But Jali blames himself for his father leaving, and while feeling a sense of abandonment and sadness, is forced to role-model for his young brother the appropriate respect for country, especially along the riverbank near the Brownhill Aboriginal Mission where they live.

At school, with low literacy and numeracy skills and not fitting in with either the white kids of the Indigenous kids – Jali gets into a lot of fights and a lot of trouble. At times, he succumbs to the peer pressure of the mission boys and he ends up making bad choices.

Then, with no choices left at all – for mother or son – Jali is sent to boarding school in the city in the hope of a brighter, more positive life path.

Feeling out of place, still struggling with numeracy and literacy, and a few too many visits to the principals office, Jali misses home terribly, often losing himself in thoughts of his mother and brother and the pipis and fish he used to enjoy back home. But boarding school provides a more supporting schooling environment where teachers takes time to explain the consequences of his negative actions so that he could learn to be the better man he aims for. Jali also finds a sense of brotherhood with a new mate Jack who shares similar interests including rugby league player Johnathan Thurston.

Jali’s journey at St Stephen’s is also one about reconciliation, true friendship, and the difference a supportive educational arrangement can make to a young person. Jali proves that it’s possible to make change in yourself when offered positive affirmations as opposed to punishment and scolding.

Through Jali’s time at boarding school and his reflections back to the mission, we learn about the ongoing cultural traditions passed on to young people today in some areas, the need to respect and listen to Elders, and the joy in shared storytelling.

I am a firm believer that fiction that embraces our own life experiences can capture a passion, a soul, a depth that other created stories can’t. The themes of the work include: separation from family, struggle and sacrifice, and achievement through hard work – the same experiences that the author Ricky Macourt had as young fella. Ricky himself went to boarding school and admits it was ‘really tough leaving my home and family… and feeling like I didn’t belong.’ He says that all the emotions and experienced uncovered in Jali’s story he has experienced himself.

You can buy Jali Boy as a single work through Booktopia for $12.95 or buy the guided reading pack complete for $69.96 as part of the Yarning Strong series from Oxford University Press.