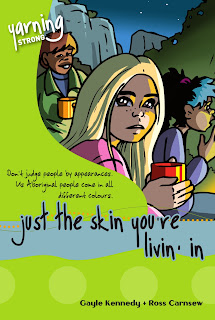 Tahnee is from the Wongaiibon people and lives with her extended family in western NSW, where there’s a multicultural school population. She likes doing what other kids do: swimming in the river, going to the footy, riding bikes, camping and so on.

But her seemingly normal teenage life takes a twist when she heads off to boarding school and finds herself as the only Koori girl in her school year. This is a similar experience for many young Aboriginal people seeking a good education -

Confronted with racial stereotyping from some of her new friends, who think she’s ‘too fair’, only pretending to be Aboriginal for financial benefit, or that she must’ve been ‘adopted into an Aboriginal family’, Tahnee is distraught when she heads home for school holidays. As if homesickness wasn't enough for her to manage.

While home with her family though, she finds comfort and strength in the words of her Nan, who reminds her that: Kooris come in all different colours. Ya brother’s dark as night but he’s still ya brother. Her Nan instils the message that skin does not define identity saying …your skin is just the thing you’re livin’ in. It’s the wrapping that you came in'.

An important message for children and adults, black and white alike!

The key themes of this story are: knowing who you are, refusing to be defined by others, racism and the importance of family.

Written by the David Unaipon Award-wining author of  Me, Antman & Fleebag,  Gayle Kennedy is a member of the Wangaiibon clan of the Nyaampa-speaking nation of South-West NSW. Gayle is a freelance writer based in Sydney but has previously worked at Streetwize Comics (1995-1998).

Ross Carnsew,  long time cartoonist with Streetwize Comics (whom I was fortunate enough to work with from 1992-94), uses his signature illustrations to bring to life the family and school gatherings and surrounds where Tahnee’s story unfolds.

This novel is part of the Yarning Strong education series and is targeted and 10-13 year olds. It can be purchased as a standalone title or as a teaching resource with a behind the scenes DVD, professional support CD-Rom and a professional support manual.
Posted by Dr Anita Heiss at Sunday, February 19, 2012

I really like to read.Hope to learn a lot and have a nice experience here! my best regards guys!
http://www.facebook.com/pages/Skin-Laser-Surgery-Center/114304728602108