I'm grateful for a week in The Gap...

My character Veronica will live in The Gap. She has three grown up sons. And she’s a reconciliationist. That’s all you need to now right now. But last week I spent five long days and nights walking, driving, talking, drinking coffee and practicing ‘being’ Veronica. I had great research assistants in Jackie and John Huggins… and aside from their knowledge on history of the area I am grateful for their humour in helping me get the story re landscape / setting, spot on. That's Jackie below with Jess Rudd at her Ruby Blues event at Riverbend Books last Thursday night. 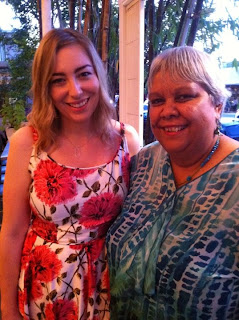 Here are a few more things I’m grateful for in The Gap:

1. AUNTY RITA HUGGINS MEMORIAL: Many of you reading this will already have heard of Rita Huggins, the graceful woman who, as a child was stolen from her country and taken to what was the Cherbourg Aboriginal Reserve. Aunty Rita (the mother of my sistagirl Jackie) was also a well-respected Elder around The Gap. And so it was fitting, after launching her biography at Poet’s Corner back in 1994, that a memorial dedicated to her was erected at Walton Bridge  (see pic below). 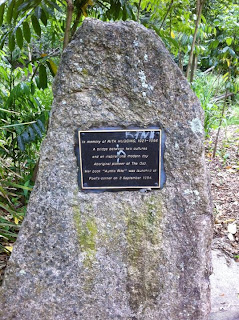 2. PEACE: It’s no secret; I’m a city chick, an urban-dwelling blackfella. I like sealed roads and coffee shops within walking distance from home. But of course I appreciate the peacefulness of being away from the hustle and bustle of traffic, people and industry that comes with city life. And so I am grateful that The Gap actually gave ne everything I needed. Tranquility in being some distance from the CBD, morning walks in the leafy suburb that borders Mt Nebo (so it’s like being in the bush) and plenty of places to have coffee – try the soy chai latte at Café Tara  or face Waterworks Road and watch the locals at the Coffee Club (yes, I know I slightly bagged it out in West End, but it’s an institution here so ‘Veronica’ and I had to go there). Kudos and thanks to my research assistant Josie Montano to for taking me to both venues. And I must confess, the head is so exhausting here in Brissy that I had to drive…

3. THE GT: You can’t call yourself a local without going to the Gap Tavern – better known as the GT. I went on Barra-Mundi but had steak. I’m grateful - I think – that I wasn’t aware at the time that Monday is ‘swingers night’ there. NOTE: this has not been confirmed through research, but three women did tell me that was the case. I am yet to return to determine the truth to that aspect of the tavern at the base of the mountain. Must add the food and service was fabulous!

4. FRIENDLY LOCALS:  I think I liked The Gap because it reminded me of my home suburb in Sydney. Morning walks have locals nod, wink, smile and say hello as they pass each other in the street, and for that friendliness – or what I consider to be ‘normal’- I am grateful! 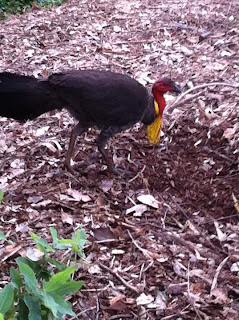 5. BUSH TURKEYS: I’m grateful I developed a much healthier relationship with bush turkeys at The Gap. After not appreciating them all too well at West End and around the QUT campus, I’d thought more than once about what they might be like stuffed, dressed and baked. Alas, it’s the totem of one of the staff here at Kelvin Grove campus and I was shunned from the lunchtime discussion for even considering baking the precious bird. My new mate above, found roaming out the front of St Peter Chanel School made me think more kindly of the animal which I’m told can destroy an entire garden, watering system and all.
Posted by Dr Anita Heiss at Sunday, November 06, 2011

Ah, but that's not the half of what they get up to.
Brush turkey shredded the power cords connecting my pool pump to the pool one year.
New pump, $600.
Trapper to remove & relocate bird $170.
Bird related angst and trauma therapy - ongoing!

I'm so excited to read this book! I grew up in the Gap, and have frequented both the institutions that are the Coffee Club and the Gap Tavern many times. It's going to be quite surreal reading about it!

I'm also sad reading this, though, because I went to school in The Gap and was taught nothing about the Aboriginal history of the area! What a missed opportunity. It sounds silly, but I didn't even know that we had any elders nearby, and I never met anyone who identified themselves as Aboriginal at my primary or high school. Hopefully your book will help me discover more!

Hi Anita, I'm a Gap local and am so happy you enjoyed your time here! Cafe Tara also does a pretty fabo breakfast as well. Hope you checked out Fresh Az (fruit and veggie store) - they have an awesome range of ice cream... Am so looking forward to reading your new book and seeing The Gap through Veronica's eyes. So Veronica is living in The Gap, and working to close the gap?!!?!

Hey Quokka - sorry for laughing re the therapy. I get it :) Peace, AH

Josie - I think I need a return visit, esp to the GT and Tara's! X

Kaela - I hope I do justice to The Gap for you, truly. I also hope that you will find new meaning in and around the city of Brisbane in terms of it's ongoing Aboriginal heritage. Best, AH

Bridget - I did go to Fresh Az - got some amazing rocky road! Indeed, nice work there re Vee and The Gap! I hope you like her. :)