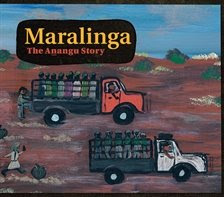 Written and illustrated by the Yalata and Oak Valley Communities with Christobel Mattingley
Allen and Unwin Hardcover 64pp $35.00

This extraordinary book is of cultural and historical significance, telling the story of the earliest beginnings of the Anangu people – the knowledge of their country, their relationship to water and the desert, how skilled they were at finding bush foods like red roo, emu, wombat and snake.

The story tells of the local invasion and settlement and how whitefellas claimed a place they had no connection to, giving their own names to sacred sites, and building the Transcontinental Railway from Port August to Kalgoorlie which opened in 1917. The construction workers introduced the Anangu to tobacco, tea, sugar, white flour and alcohol.

Every page explodes with colour and different styles of painting but also black and white photos that give another form of recorded history for the reader, showing the Anangu story as we learn for example of some aspects of mission life at Ooldea.

It’s the descriptions of life during nuclear testing that will stay with readers. In 1953, a year after the Ooldea Mission closed, it was announced in Britain and Australia that atomic weapons were to be tested in an area which was an Aboriginal reserve. The Long Range Weapons Establishment issued assurances that Aboriginal people would not be affected by the trials.

Testimonies by Anangu people in the book tell of walking and working the land where the testings took place, without warnings of the dangers or consequences. The whitefellas wore masks when around drums of poison and dismantling buildings, the blackfellas didn’t even have shoes.

Stories of families in the area at the time of testing, tell of still-born babies and premature births, infants dying of brain tumours and heart conditions, others being born with physical deformities or developing epilepsy as young children. Clearly the community had not been protected from the dangers of testing.

For a brief rundown of the facts (from Wikipedia): ‘The nuclear tests occurred between 1955 and 1963 at the Maralinga site. A total of seven major nuclear tests were performed, but the site was also used for hundreds of minor trials, many of which were intended to investigate the effects of fire or non-nuclear explosions on atomic weapons.

The site was contaminated with radioactive materials and an initial cleanup was attempted in 1967. The McClelland Royal Commission, an examination of the effects of the tests, delivered its report in 1985, and found that significant radiation hazards still existed at many of the Maralinga test areas. It recommended another cleanup, which was completed in 2000 at a cost of $108 million. Debate continued over the safety of the site and the long-term health effects on the traditional Aboriginal owners of the land and former personnel. In January 1985, the Maralinga Tjarutja native title land was handed back to the Maralinga people under the Maralinga Tjarutja Land Rights Act, 1984. In 1994, the Australian Government paid compensation amounting to $13.5 million to the local Maralinga Tjarutja people.’

The process of developing this important resrouce is as significant as the book itself. Maralinga: The Anangu Story was created through extensive research and community consultation, in the style of the Papunya School Book of Country and History by the same publisher. Yalata and Oak Valley community elders joined multi-award winning author Christobel Mattingley as storytellers, translators and artists to tell the story of what they experienced at Maralinga, before the bomb and after.

This is a history book for ALL Australians. But it is also an important resource for the classroom. A glossary at the back helps to instil the idea of language as present as well as past and how the Pitjanjatjara language is spoken most widely by the Western desert peoples.

Notes for teachers on how to use the book in class can be downloaded from: http://www.allenandunwin.com/default.aspx?page=94&book=9781741756210

Make sure your local library orders it in!
Posted by Dr Anita Heiss at Thursday, June 25, 2009