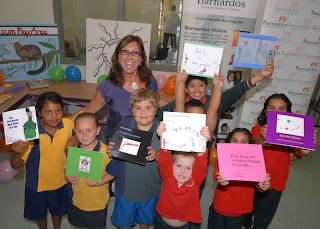 I was absolutely thrilled to be asked to make a presentation to a group of new young authors in Sydney in early December. The event signalled the completion of the wordUP literacy program which was run during September and October as a contribution to the nationwide Close the Gap campaign, and it included participants from the Yurangai Learning Centre’s Out of School Program, which is operated by Barnardos at the Factory Community Centre in Waterloo.

The project involved writing books – and the books, you may be surprised to learn, were written by some of Australia’s youngest authors. I was excited to release my first book when I was 28, but the youngest author in this group was only five years old! Now that is inspiring and impressive, by anyone’s standards.

The range of ideas and stories in the wordUP project reflects the diversity of our lives in this city, and also the creative minds of the kids in the local area. And creativity and diversity are important to recognise and also celebrate.

The fact that these books were written in four weeks is astounding and I think that I could benefit from some workshops also given my books take between four months and four years to write.

I know there was a lot of commitment from the young authors to get their books written and illustrated, but they completed the work with largely with the support and encouragement of the Social Work Students from the University of New South Wales who were given the broad task of creating a project related to the Close The Gap campaign, which in turn will help to raise the profile of the campaign itself. They found a suitable partner in the Yuringai Learning Centre – and I congratulate them all for your efforts and for ensuring that we will have a generation of creative producers coming out of Waterloo and Redfern.

As the Chair of the Australian Society of Authors, and someone who loves to write and to read books, it was my pleasure to officially present the books to their authors.

Our youngest author is Ben Snaea at only 5 years old – and his book called Jet Li in the Jungle is about Jet Li and his brother Jack and cousin John fighting lions in the jungle. It scared me a little because Ben drew really lifelike pictures to go with the story. But the photos of Ben in the book looks like he had fun writing it.

Liam Thompson is only 6 years old and already he thinks writing stories are fun, and that it’s ‘good’ to be an author. I agree with Liam. Liam’s book Ben Ten and his First Journey involves kangaroos and birds and also has photos of Liam in action! They’re great.

Isabella Redman is 8 years old, and her book King Kong was swinging through the Jungle uses bold coloured pages, and text and Isabella’s own handwriting to tell the story. And on one page, a picture of a packet of bandaids and on another, just the whites of King Kong’s eyes in the dark, means there are some very unique and clever visuals.

Belinda McDonnell is 8 years old and her favourite colours are blue, purple, pink and yellow. And there’s lots of hot pink background in her book The Wicked Witch. Belinda’s book is about a witch with an evil dog called Sniffles and they live in a big castle made out of ice. I really liked the pictures of the evil witches daughter the Ice Princess.

Serika Shillingsworth is 9 years old, and her book The Evil Queen Who Stole The Sky – is a story about an evil queen who raises taxes so she can buy more dresses… and puts the sky in her dress for a while.

Kaleab Gavin is 9 years old and he liked making up names for his book The Mystery Noise about boys exploring the jungle, which is very scary and action –packed with snakes and back flips and fractured skulls and hospitals. But it’s a book about good friends too.

Samantha Redman is 10 years old, and she thinks that writing books can sometimes be boring but sometimes a lot of fun also… and that being an author is ‘very exciting’. Samantha’s book Sam’s Best Pictures is about fish, the moon and a serious Lego fight!

Jerome is 10 year old and I think he really loves movies because he wrote a book called Columbia Tristar Pictures about a Kungfu Panda and dragon warriors. And there are skilful drawings of Olympic Medals too. Maybe Jerome has a future in doing animations for Hollywood blockbuster movies.

Last but not least, Liam McDonnell is 11 years old and the best thing Liam liked about working on his book The Shotgun, was drawing the pictures. And Liam’s illustrations are perfect for his suspense story about an FBI agent on a mission that includes saving hostages.

Congratulations to all these wonderful kids and the team that helped to bring their stories to life.
Posted by Dr Anita Heiss at Saturday, December 27, 2008

We provide Best assignments help Australia to the students like case study, essay writing assignment help, Report Writing, Custom writing, nursing assignment help and more. Our team has experienced assignment experts at best price by Assignment provider. Who looking for Engineering assignment help from Enginering expert get a contact with sample assignment. customer satisfaction is the utmost priority, hence, the quality inspection team makes sure that every assignment is entirely unique and does not contain any sign of grammatical and spelling errors before reaching the client. Can an assignment helper  in improving a student’s academic performance? Yes, Our academic experts are committed to delivering high-quality assessment solutions to you and work under a certain date of timeline Certainly! And, this is why we are here – to help you achieve the top grades!

Thanks for your informative content. It's extremely useful to students for further research and assistance. However, there is an academic assignment help provider that goes by the name TutorVersal, who has been offering various assignment writing services like Essay Help services, report writing services, case study services et cetera. The company has delivered thousands of assignments in which students scored high-distinction grades. They have never let any student down and in addition, offers various essay writing help services in subjects like management, nursing, law, engineering, and more. They constantly strive to provide the best academic solutions at the cheapest price as they know how difficult it is for a student to manage such expenses. Thus, any students who feel helpless in their academic assignments can avail prime assignments services at Tutorversal.com.

Students are given assignments, such as an essay, on a regular or periodic basis by their professors. These are mandatory and students are graded on the basis of the quality of work done by them. Essay writing may be a great opportunity to score the top grades but they come along with challenges as well. To overcome them, the best way is to consult an online academic helper who provides essay help. TutorVersal has a dedicated team of qualified essay and homework help experts who assist students with their assignment tasks. This not allows students to submit their work on time but also lets them score excellent grades in them!

Hey, great article you have there. I am sure that the students looking for assignment helpand ways to write their assignment got to learn a lot of things that were not clear before. The students who need guidance on how to write an assignment, I am also an academic expert who provide online assignment help to the university going students in their academic tasks at My Assignment Services. We are a team of professional experts who are all either a Master’s degree holder or a PhD scholar. For years, we have aided students who are busy in their part time jobs or cannot take out sufficient time for assignment writing. Their can you do my assignment questions are successfully addressed at My Assignment Services.

Wow. This is an interesting blog to read. It actually familiarised me with various qualities that a true and genuine assignment provider must have. Now, I understood that the work of an assignment expert is not just to provide assistance with the assignment, but also to clarify the topics and concepts related to the assignment that can become hindrance for students when they do their assignments.

This is the reason I have always chosen My Assignment Services as my assignment writer. They have not only helped me with my assignments but also provided me free samples and reference solutions that helped me a lot while doing my assignments myself. Moreover, the free copy of the Turnitin report that they always provide me with the work is what validates their authentic work. In addition to this, I have often made use of their live one-on-one session to get in touch with their experts even after they submitted the whole work. This helped me a lot to clarify the concepts even better.

So, whenever you search for the most reliable assignment provider, My Assignment Services is surely one of the best options to choose from

Thank you for sharing this informative post.MyAssignmenthelp.com is giving assignment help to students.we are already trusted by thousands of students who struggle to write their academic papers and also by those students who simply want accounting dissertation to save their time and make life easy.

Thank you for such a supportive thought on your site which help me in gaining informative knowledge.
We also provide service in sop statement of purpose and write my assignment. TheStudentHelpline provide such a writer who write best and perfect assignment and sop for you while keeping you expectation into the mind and deliver to you on time.

Its very informative thanks for sharing..
You may also check Nursing Assignment Help