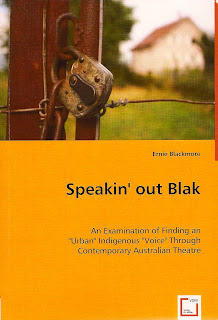 Speakin’ Out Blak: An examination of finding an “Urban” Indigenous “Voice” through contemporary Australian Theatre
By Ernie Blackmore

I first read this work when I marked is a thesis for the Doctor of Philosophy – School of English Literatures, Philosophies & Languages, University of Wollongong a few years ago. To see it in print now, published by a German house, is a thrill.

To say Speakin’ Out Blak is a mixed bag of knowledge, analysis, information and insight, would be an understatement. Within these pages, Blackmore’s “ordinary, creative and academic voices” have cleverly woven his own life experiences with academic analysis and creative ideas, to uncover and unpack broad ranging topics and issues. These include: colonizing dramaturges, notions of truth, the reconciliation process, Indigenous voice, the Stolen Generations, perceptions of homogeneity, denial and creation of identities, the role of theatre, mutual obligations and shared responsibility agreements, HIV/AIDS, euthanasia, Indigenous protocols, DTW models for teaching and much more.

The range of issues and the way in which they are presented, takes this book way beyond the academic boundaries of English and Creative Writing, but into the areas of History, Social Work, Psychology and Cultural Studies.

Blackmore positions himself as an Indigenous writer and critic, so as a reader we are aware that his words are filtered through both those lenses, experiences, knowledges and realities. And he has set himself a difficult yet important task in considering Indigenous voice in contemporary Australian theatre - as theatre - of all the writing forms - is the least considered in academic circles; there is much critical analysis of Aboriginal poetry, life writing and more recently, fiction. Perhaps this is because theatre as performance, has been part of Aboriginal society since the beginning of time, and only in the last four decades has it taken on the role of demonstrating, showcasing, and explaining the realities of contemporary Aboriginal lives. Either way, Blackmore has invested his time and energy into consolidating existing material with significant input of his own analysis and creations, delivering for the academy a much needed injection into the discourse around Aboriginal Australian theatre.

Aboriginal Australians struggle daily with perceived notions of our society and culture being confined to remote and rural areas, where the real blackfellas are, where the real culture is, and where voice and representation must be sought. Contrary to this popular belief, the reality is that the bulk of Aboriginal Australia lives in urban centres.

Speakin’ Out Blak makes the statement that an urban Aboriginal voice at every level is needed in Australian theatre.

As an educational tool, particularly for Australian students, theatre is an engaging and non-confrontational way to deal with significant issues such as the stolen generations. For this reason I hope that the future seas a touring production of Blackmore’s own play Waiting for Ships. Blackmore’s Positive Expectations – also included in this publication -left me emotionally drained, the sign of powerful creative writing.

I’d like to congratulate Ernie Blackmore for his valuable contribution to the body of knowledge around Aboriginal politics, culture, the arts and academia. Speakin’ Out Blak will serve to generate new conversations not only around Aboriginal theatre in Australia, but around the notions of voice, representation, identity and the place of Aboriginal people in Australian society every day.
Posted by Dr Anita Heiss at Thursday, December 18, 2008