10 more days, 10 more deadly Brisbane things to be grateful for... 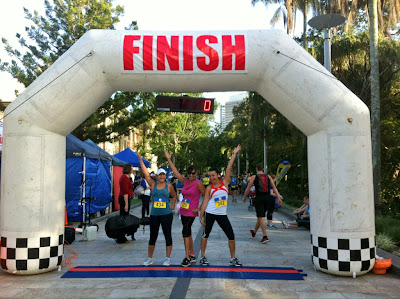 QUT CLASSIC: Let’s be honest from the outset; I’m no runner. I’m more a shuffler, a walker-cum-runner – a ralker! But in my new Brisbane-life for the next six months I’m setting and fulfilling some serious personal challenges. The first was going in the inaugural QUT Classic. Having joined up with these two lovelies above – Jasmyn and Louisa who are 15 years younger than me - we managed to put the FUN in ‘fun run’!

Contrary to the clock above which says we finished in 0 time, we actually finished the course in 85 minutes, which included a lot of ‘laughing time’, and stopping to smell the roses, and the bacon being cooked along the way. Our next effort is the Colour Run on the Gold Coast and then the City2South on June 16, at which time we’ll be raising funds for the Indigenous Literacy Foundation. If you would like to support us running so others can read, we’d appreciate a donation here. 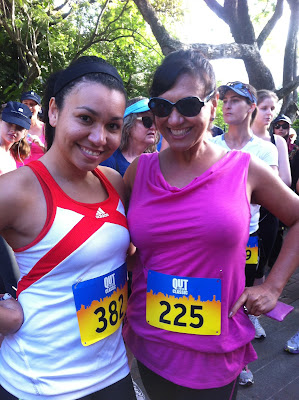 Putting the FUN in fun run

LEFKAS TAVERNA: So impressed by Lefkas Greek Restaurant in West End, I’ve been twice since arriving only three weeks ago. It’s long been a favourite of mine, and lots of other people it seems, as most nights of the week it is jam-packed! The food is fresh and tasty (recommend the BBQ’d baby octopus and whatever the fish of the day is), the service is friendly, and the atmosphere is alive but not too loud. 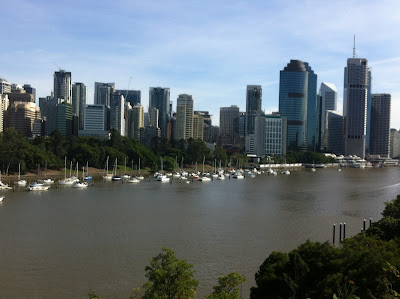 THE CLIFFS: I’ve written about this café at Kangaroo Point before, in fact it appears in my forthcoming novel TIDDAS (due for release in 2014). I love The Cliffs  essentially for the view (above), but returning there yesterday I also found a range of delicious cakes that blew my mind and would my waistline too if I indulge. Rather, I stuck to the helium and avocado on sour dough and a good cup of coffee. My recommendation is to go during the week if you can because on the weekends, cyclists and other fitness freaks fill the joint from early AM.

STORY BRIDGE HOTEL BREAKFAST: The Story Bridge Hotel  is famous for fun times, music and a number of bars that pulse during the week. So it’s not a place many would think about heading to for breaky, but I’ve been a couple of times, once for ‘research’, once for… breakfast. Devoured the poached eggs / pesto on toast, the freshly made juice and coffee. There’s no view but it’s the better option on a weekend when The Cliffs is packed out! 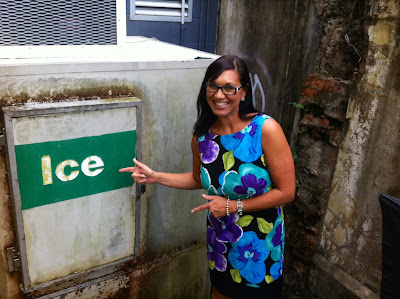 PLAYING HOOKIE: or is it hookey? Whatever, I mean taking a few hours out of the normal day to explore. Did a little of that this week, anyone guess where the pic above was taken? 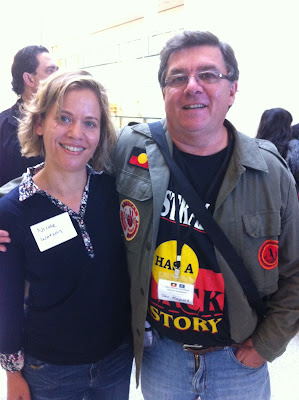 FIRST NATIONS AUSTRALIA WRITERS’ WORKSHOP:
Last week I was part of a significant literary event at the SLQLD. The inaugural First Nations Australia Writers’ Workshop brought together emerging and established writers across genres, but also industry professionals including publishers, experts in digital media and the like. For me, it was about sitting back and admiring the evolution of our writing and publishing industry and catching up with writers I have read and been inspired by over the past two decades. 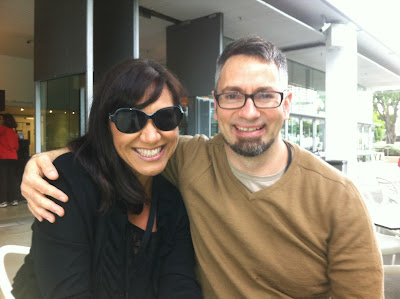 With Dub Leffler outside GOMA!

I’d like to congratulation the organisers; Kerry Reed-Gilbert, Cathy Craigie and Tony Duke, and the committee that managed to bring together such a pool of talent and knowledge. And a huge shout out those in my pics here including JohnMaynard, crime novelist Nicole Watson, educational blogger Leesa Watego, author / illustrator Dub Leffler and my cuz Bev Grant-Lipscomb. 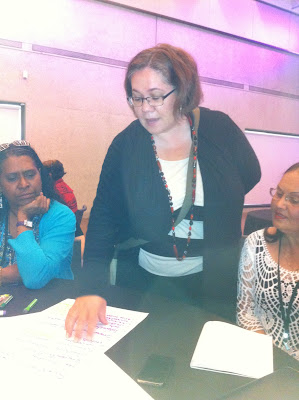 Leesa Watego in action above, and with cousin Bev below! 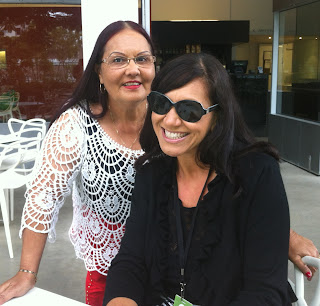 ST. MARGARET’S ANGLICAN GIRLS’ SCHOOL: It’s no secret I love talking about books and writing and sharing the creative process with students around Australia. I’m grateful therefore to St Margaret’s Anglican Girls’ School  for the invitation to talk to their girls about my writing and researching methodology, and to share some tips for their own creative writing projects. And best of all, check out the view in the background, which is the same view from their library. I could sit there all day and just read, writer… or maybe just stare! 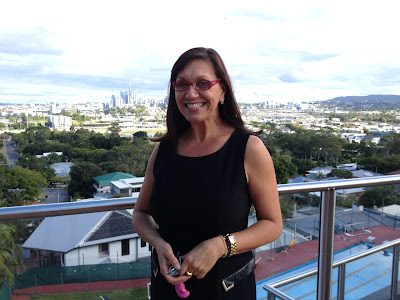 Check out that view over the city!

FERNY GROVE STATE HIGH SCHOOL: I’m a supporter of the National Curriculum, which kicks in in 2014, and so I was grateful for the opportunity to talk to the English Department at Ferny Grove State High School about ways of embedding Indigenous literature into their curriculum. I left completely inspired about the 1000s of Indigenous works in print today.

RAINY DAYS FOR READING: There’s only been a couple of rainy days since I’ve been here, and while I moved north for the warmth, I am grateful for those rare days that let me stay in bed guilt free (when it’s sunny, I feel compelled to be outside!). In the past two weeks I’ve finished Melissa Lucashenko’s latest offering Mullumbimby (which would make a sensational film!) and a re-read of Mark Twain’s  The Adventures of Huckleberry Finn, which I hadn’t read since, school.

BDB: Best business idea EVER! The Blow Dry Bar is the place you pop into to have your hair washed, blow-dried and straightened (or tonged!). I'm told ladies pop in on Friday's when they're about to go out. $15 was all it cost to take my out of control mane and tame it for a photo-shoot on Monday this week. The BDB in Elizabeth Street is my biggest grateful find in Brisbane! They're all around the place though, check them out!
Posted by Dr Anita Heiss at Wednesday, May 15, 2013