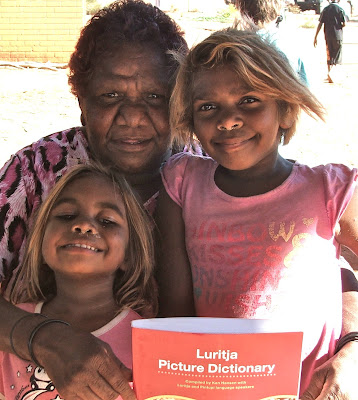 The Luritja Picture Dictionary (IAD Press) is the tenth in the series of picture dictionaries published by Aboriginal publishing house, IAD Press.

In what has proven to be an innovative learning resource, the picture dictionary format not only includes English to Luritja translations accompanied by culturally appropriate illustrations to further engage the learner, it also includes a pronunciation guide and information on Luritja culture such as kinship, bush foods and family.

“Through working closely with communities and linguists, IAD Press created the nationally acclaimed Picture Dictionary series. These dictionaries were designed to increase literacy levels and promote reading for Aboriginal people by producing materials that were relevant to their own expressed needs and interests, invited co-operative learning and were accessible to people in bush communities.

“The Picture Dictionary series also promotes cross cultural exchange and contributes to improve the wellbeing of Aboriginal people by increasing self-esteem and self-identity through encouraging use of traditional languages,” she said.

“This series has been a combined effort that would not have been possible without the
community and linguists input and the financial support from the Australian Government, NT Government and philanthropic organisations.”

English translation:
“We are happy to have our own Luritja dictionary for the school and the community. We will use it to teach the children the right way to write and spell their language words. They will also learn the meaning of some of the more difficult words. If the student can’t spell they can look it up in the dictionary. It is important that the children maintain the use of their language so they can become strong Luritja adults and be proud to be who they are. Any other people who want to learn Luritja can use this and look it up for spelling, so they can write and speak correctly”.

The Luritja celebration included singing from the Mount Liebig and Papunya school choir, speeches from community elders and the eating of a chocolate cake made to resemble the cover of the picture dictionary.

IAD Press will continue to address the need for culturally appropriate educational resources with the launch of the Walpiri Picture Dictionary late 2011. 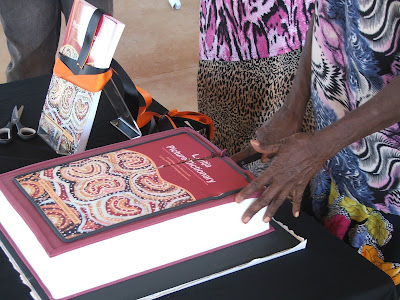 I'm really grateful for your post. You will find a lot of approaches after visiting your post. Great work!
jual jelly gamat