This is a belated blog but I didn’t want to let the experience of the Byron Bay Writers’ Festival  pass without me expressing my gratitude. This fabulous video shot by Tim Eddy truly captures the spirit of the festival, and I recommend watching it just to make yourself feel good today.

In the meantime, in no particular order (and leaving out lots of other things I am grateful for) here are five gratefuls from my weekend at the BBWF: 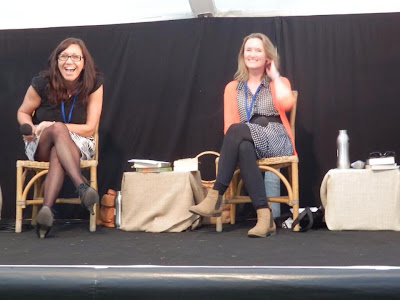 Pic courtesy Diane Curran
FUNNIEST PANEL EVER: I have been to writers festivals around the country and indeed internationally, and I always have a laugh and sometimes a weep, but the BBWF this year provided the biggest laughs I have ever experienced at any event anywhere. Taking the stage with local author LisaWalker featured on my blog below and in the pic above) to talk about chick lit and mass market, we say alongside Colin Falconer who had more identities than I could count, Ed Chatterton who was supposed to be suffering from man flu, and our deadly chair Moya Sayer-Jones   who facilitated the laughter! Seriously, I nearly peed my pants. You will see the laugher of the panel and the audience in the fab video by Tim Eddy. 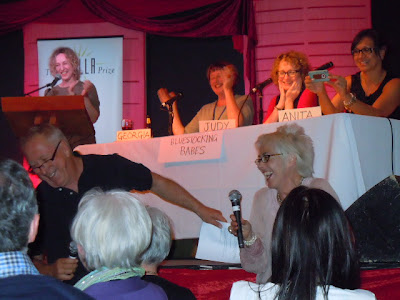 BLUE STOCKING BABES: The BBWF was the second Stella Prize Trivia night I’d done (the other being at the Perth Writers Festival). The event is always full of laughter, a touch of competition and the occasional boo, but it’s also very stressful. So stressful in fact that I didn’t recognise my own work (from Not Meeting Mr Right) being read out to the audience. Thankfully my team members Georgia Blain  and Judy Horacek had all the answers! Big shout out to the awesome Sally Warhaft who is the most awesome mediator, timekeeper, chair, judge ever! And of course, even she knows we were robbed on the night. 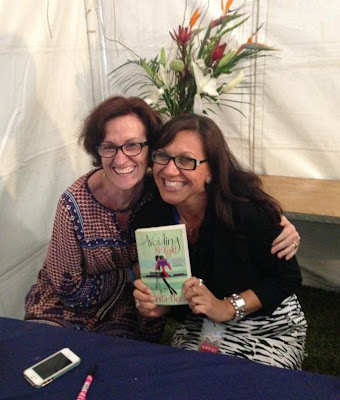 MEETING THE READERS: I like going to festivals because I get to meet my readers. I think it’s a normal part of being a writer to engage with those I write for. I like to know what they get out of my storytelling, which characters they relate to and why. I especially loved the audience engagement in our chick lit session with support from readers such as Colleen Hickey (pictured above). She gladly stepped in as one-woman cheer squad, just like a mother. Too gorgeous! 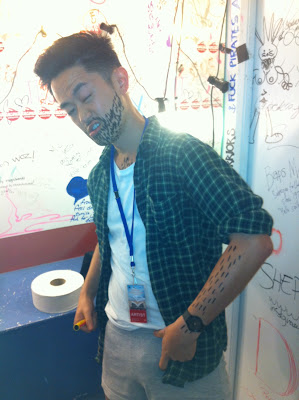 CATCHING UP WITH FRIENDS: The BBWF was a wonderful opportunity to catch up with writerly friends and to make new ones. Just because I have this fabulous pic of Benjamin Law  from the Stella Prize event, I’ll flag him today and note that I am always grateful to see Ben. And if you haven’t read The Family Law then I totally recommend it. It picked my up at a time when I was feeling very low. 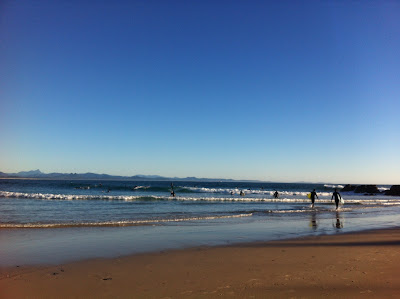 BYRON BAY BEACH FRONT: One cannot ignore the absolute beauty of the beachfront at Byron. Peaceful beyond words so I won’t add any. The photo speaks for itself. And I’m grateful.

Finally, a heartfelt thank you to Jeni Caffin and all her team at the Northern Rivers Writers Centre, especially the volunteers who make the festival as special as it is.

Everyone knows the Hypatia Hellraisers won fair and square!

I like this blog very much.
Thank you very much.
luxury accommodation byron bay

I have a big family. I live with my mom, my dad, my two sisters, and my brother. Both of my sisters
are older than me,but my brother is younger. My sister Elizabeth is the oldest. She is sixteen years
old. Carrie is thirteen casa98 old.We used to share a He helps little kids are sick. room, but when
we moved to our new town,we each got rooms of our own. My brother John is youngest.He is only four
years old. My mom’s name is Sally. She used to be a teacher, but now she stays home to take care of
us.My dad’s name is Tim they is a doc.