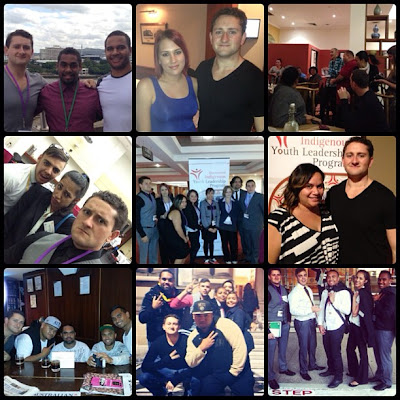 I can’t effectively do all this on my own in Townsville and need to finish rebuilding my relationship with my immediate family. I have unfinished business in Newcastle and I need to take a step back for me to move forward. I have made the hard decision to return home for now but my goals and focus remains the same. DETERMINATION, DEDICATION, MOTIVATION!
NAIDOC week http://www.naidoc.org.au/ is a special time for me. It gives me time to reflect & celebrate the history, culture and achievements of our people. NAIDOC is a time where we get the opportunity to share our culture on a broader level. NAIDOC is a great opportunity to participate actively and support community.
This year I have had the opportunity on being a guest at Heatley State School and Ingham High School. This is an honour to be able to represent my people so far away from home and speak about the pride I hold with my Aboriginal heritage and history.
When I think of people that helped shape where we are today names come up like Eddie Mabo,  Charles Perkins,  Cathy Freeman, Arthur Beetson and Ernie Dingo. On a more personal level I think of people back in my own community such as my father Justin Ridgeway (First Worimi Police Officer), relative Dr. Kelvin Kong   (First Indigenous Surgeon), friend & mentor Joel Wenitong   (The Last Kinection – Medicine Student) but the big name for me would be my grandfather & Worimi Elder Noel ‘John’ Ridgeway OAM.
You ask any member of our family or community and he is a man who has been through the struggle; he is a man who has done it tough; he has paid his dues; been rewarded with the highest of accolades for our people and is well respected by our community and its surrounds. This respect was shown recently when he needed urgent surgery to correct deteriorating vision and community held a fundraiser to assist. We had plenty of donations, raffles & auctions rolling in but the biggest names I seen on the list were Anthony and Tony Mundine. Anthony and Tony donated a set of signed boxing gloves for auction to help my pop.
I know how important our pop is to us as a family but it was an eye opener just to see how important he is to our community and other areas. The list of awards he has received is remarkable so it shouldn’t be a surprise of the influence he has had on our people. This list includes OAM, Premiers Medal, Port Stephens Citizen of the Year and many more.
To finish I would like to say; be proud of who are; have fun; embrace yourself, your strengths and continually push our limits to better ourselves and our people and spread the message of love and respect to ourselves and each other.
Posted by Dr Anita Heiss at Wednesday, July 10, 2013