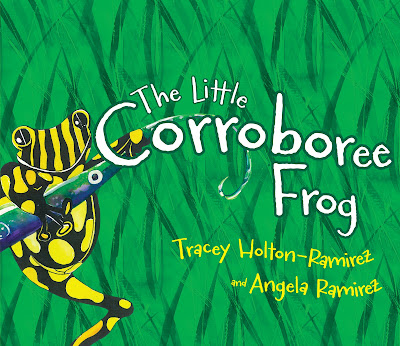 It is possible to engage young readers while teaching them about the plight of some of our most endangered species, and The Little Corroboree Frog is the perfect example of how to do it.

Many readers like me, will not have been aware before today that the Southern Corroboree Frog with its black and yellow markings, is a tiny ground-dwelling frog found in the snowy alpine regions of Kosciuszko National Park in New South Wales. Unfortuantely though, it is highly endangered, and that’s why gorgeous, colourful picture books like this one matters beyond its entertainment value.

Following the story of Jet the Corroboree Frog come spring time, when the snow has melted and he has his croak aimed at the girl frog Bindi, we read about the impact of rivers drying up and the lack of human care for the environment. Not surprisingly, the responsibility of ensuring these particular frogs continue to breed is the responsibility of humans also.

The short tale has been written by Tracey Holton-Ramirez and illustrated by her sister Angela Ramirez, who are descended from the Ngarluma and Yindjibarndi people of the Pilbara region of Western Australia, and both passionate about wildlife protection.

The book also includes some specific information about the amphibians. To learn more about the programs to save the Sothern Cross Frog you can read more at the Murray Catchment Management Authority, the Amphibian Research Centre, the Taronga Conservation Society Australia www.taronga.org.au and Zoos Victoria.

Why not see how you can help too?

The Little Corroboree Frog is available from Magabala Books direct or from Booktopia.
Posted by Dr Anita Heiss at Wednesday, April 17, 2013