Bless me Father for I have sinned...

I had a ball as part of the inaugural Newcastle Writers’ Festival on Saturday April 6, and participated in a session simply titled ‘Sins’. After a week of delivering serious lectures and running creative writing workshops in schools, I decided to write something light-hearted and fun as my contribution to the discussion. Below is what I delivered; a one-sided conversation where I pretended to be in the confessional. There was a language warning on the night, and it comes with the disclaimer that this is a work of fiction.... mostly! 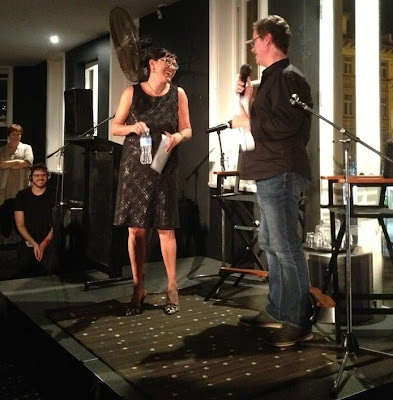 On stage with MC Richard Fildler

Bless me father for I have sinned…

It has been thirty years, four months and ten days since my last confession.

Yes father that is a long time, I hope you are comfortable.

I’m here father because I’ve only just realised that the Seven Deadly Sins aren’t what I thought they were.

You see, Deadly in my community is a good thing. Deadly means awesome to us. Deadly means excellent. People aspire to being Deadly. We’re proud to win a Deadly. So, when I heard about the Seven Deadly Sins, well I thought I had to complete them all, like a triathlon times two, plus one.

So I’m here to confess that I have fulfilled, I mean, committed as it were the Seven Deadly Sins, and my mum who’s met two Pope’s, in case you didn’t know father, said I needed to come and speak with you.

I’m sorry father, I didn’t know name-dropping was a sin also, I’ll remember that next time I’m out having a drink with Richard Fidler.

Right, yes, father, I will get back to the point.

On PRIDE Father, I don’t know why it’s a sin to be proud, but trust me I have been punished by the media in recent years for being proud - proud in my identity as an Aboriginal woman. Pride, it seems is a sin in some peoples minds father, not mine though, to me pride it’s a show of respect, of strength, of survival.

But if you think I need to say 10 more Hail Mary’s then so be it.

Yes father, I know that being humble is the opposite of being proud. But personally, I think humility is overrated… by the way did you like my latest book? It was shortlisted for a Human Rights Award, Father, and I’m proud.

About GREED – now father if you grew up in a large family like I did, then you wouldn’t see grabbing as many party pies and sausage rolls as you could at one time as greed. You would see it as survival, making sure you at least got fed.

Yes Father, I know the opposite of greed is generosity. I am generous to a fault. And humble yes, but we’ve already done that one so can we move on. I give a lot father – a lot of time, a lot of advice – especially to white people who think I am a walking talking Aboriginal encyclopaedia. Really father, if they can Google and find me, then I think they can Google and find the answers to their mostly annoying questions.

Actually Father, if you walked a day in my shoes I think you would agree that I am very generous.

Can we please move on father?

Now about ENVY – Father of course I’ve been told that love is patient, love is kind, love never means having to say your sorry and all that, but the truth is Father, envy suits me. I look good in green. If you pull the curtain and have a look you’ll agree with me.

Oh Father, are you going to bang on about pride and humility all night because I thought you were here to listen. Perhaps ‘not being a good listener’ is something you might like to add to your own list of sins to confess Father? Just a little feedback from this side of the curtain.

Which gives me a nice segue to the next so-called deadly sin of ANGER – Father, this is my greatest sin, apparently. In recent years I have been very, very angry with some of the media. Well, one side of media in particular who have been very un-Christian-like as it were. Telling lies – which I see is not on the list of 7 Deadly sins, so perhaps ‘Lies” can replace ‘Pride’ which as I’ve already mentioned should be removed.

Anyway, the point is Father, that some of the media have forced me to drop the ‘C’ bomb… a lot.

No Father, it’s not an actual bomb, it’s just a saying used to disguise the use of the word, well... I can’t say it in front of you Father because I will surely be saying Hail Mary's for the rest of my life if I do. But suffice to say many people find it an offensive word Father and it’s usually said with a tone of venom.

But to my defence Father, I must say that Aboriginal languages did not have profanities, rather things like the ‘C word’ were thoughtfully given to us by the Colonisers, you know like small pox and flour laced with strychnine.

Yes father Colonisers is another C word, and it is one I have often said with venom also, so you better add a few more Hail Mary’s to the list. What’s my tally at the moment father?

And there’s a few more. I better get my old roller-skating kneepads out eh Father?

No father, I don’t mean to be disrespectful, just trying to make this a little bit more bearable for both of us.

Yes father I will try and stop being angry and I will practice kindness, and I will send white f*^@ing light to all the Cs that make me angry every single day.

Sorry Father, please don’t tell my mother she will be most disappointed in me.

Now, look father, in terms of LUST I don’t really feel comfortable talking about this with you. Suffice to say I’ve had impure thoughts pretty much since puberty. I’m human. It’s healthy. But I did want to ask though, that thing about not coveting they neighbours wife  - what if you love her?

No father I am not a lesbian. I’m just asking for a girlfriend of mine – she’s not a lesbian either, apparently, she just likes having sex with women.

Yes father I think she is lying too , and she is a lesbian.

Anyway father, so, what if it’s not my neighbour but someone else’s neighbour. And what if she says her husband is just a dud root and they’re staying together because of the kids. Is it still a sin?

You know what father, I’m going to let my friend sort that one out for herself and I’m just going to keep seeing my f*&k buddy.

GLUTTONY – well Father, all my life I have been dieting, not bulimic, not anorexic, but I have stuck my fingers down my throat once or twice, on those occasions I guess you’d call being a glutton. But my penance – just so you know you don’t have to give me any more – is that I am now doing the 5:2 diet. You know where you eat 500 calories a day for two days and then feast the other five? Well, trust me father that is penance enough.

Yes father, I know I need to practice temperance in my life, so on my 500 calorie days I don’t drink any alcohol, only protein shakes.

Finally father in terms of SLOTH – you will be pleased to hear that I pretty much failed at being a sloth. I am not mentally, physically or spiritually lazy. I tried, really I did, but I just couldn’t do it. I am the meaning of zeal father. Really I am.

Yes, and I am humble. You are little obsessed with that one, so I think we should just finished now and you should just tell me how many Hail Mary’s you want me to do, crediting me of course for my two-degrees of separation from the Pope and that I’m not slothful…

Trust me father I won’t be sinning again for a long time.

Yes father that was a lie.

Oh Anita I LOVE this post. I can relate to much of it. (And sadly am still living with the guilt given my confessional absence!)

You were brilliant and a breath of fresh air to end with. And you looked fabulous!!