Davey Thompson is grateful for Clancestry! 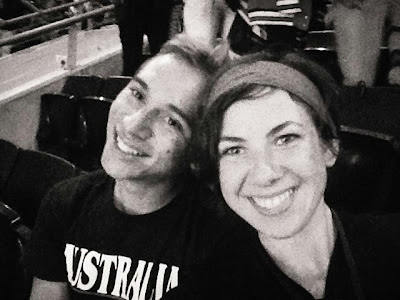 God I love Twitter! It has brought so many awesome people into my life including the fabulous Davey Thompson. A vibrant and enthusiastic 21 years old, Davey is from the Bidjara and Inningai tribes (Grandfather’s side) Wakka Wakka and Gubbi Gubbi (Grandmother’s side) both his father’s parents. He is active on Twitter (where we met cyberly) and then in February we got to share an extraordinary time with Clancestry at the QLD Performing Arts Centre in Brisbane. After my event (which you can watch here), I had a few moments to sit and yarn with Davey, and I asked him to share what he was most grateful for in terms of his work on the cultural program. And today, he generously offers the following...

Reasons why I’m grateful for Clancestry

1.       Career advancement/learning
I very recently graduated from the Aboriginal Centre for the Performing Arts where I trained as a performing artist. Immediately after graduating I started work as a trainee producer at Clancestry. Clancestry provided me with a large step up into the industry. It’s also provided me with a dive into being involved with the local Brisbane community. I went from being “That random kid from ACPA who played that drunk fella who gets knocked out in the beginning of Up The Ladder” to “Davey Thompson, emerging producer who helped make this happen”.

2.       Culture
Having Clancestry provided our mob with the rare opportunity to share our culture with a broad audience. On top of this it places our culture in the spotlight and opens the door for the next generation to immerse themselves in our traditions. On a personal level I feel like I’m more involved with our mob now. After witnessing the beauty in our culture through the various traditional dance groups who performed I feel an unbelievably large sense of pride. In addition, there was a brilliant series of inspirational people who also talked about Indigenous issues which provided me with a great amount of closure. Dr Chelsea Bond, Dr Anita Heiss and Wesley Enoch (just to name a very small few) all provided extremely valuable advice that I will hold close to me for a long, long time and I’m very grateful for them.

3.       Lara Croydon
I’ve known Lara for a little while now but I haven’t had the chance to work with her this closely on a project. We both come from similar backgrounds. We’re both passionate about our culture. We’re both passionate about the arts. We’re both fair skinned as well. That point shouldn’t really matter but it’s important to me because we both were questioned by community about our culture. There were times when we were looked at disapprovingly by our own mob purely because of our skin colour. We both did it tough leading up to Clancestry but we both got each other through it. Whenever either of us seemed a little too stressed we would call time out, go to Max Brenner and stuff ourselves with chocolate, then return with a clear head. There were times when we would just sit in silence and look at the Brisbane river. It’s those moments that we both needed. I have no idea how I could have gone about this whole process without her. I’m very grateful to have somebody so young and beautiful by my side through this and I look forward to having her around for the rest of my career.
(Photo above was taken of the two of us right as Clancestry concluded. We had a little cry and braved the camera for a truly happy snap).
Posted by Dr Anita Heiss at Monday, March 25, 2013

I definitely enjoying every little bit of it and I have you bookmarked to check out new
stuff you post."

You most definitely have made this blog into something special. You clearly know what you are doing, you've covered so many bases. Thanks!