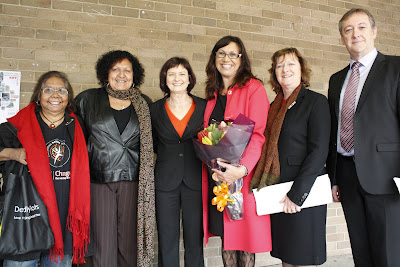 On Friday morning I stepped into the grounds of Sydney Girls High School  and felt a sense of peace immediately. I now know it was because of the enormously warm spirit of the 900+ students and progressive teachers that permeates the school. I was there to help celebrate NAIDOC Week, taking to the stage at their school assembly alongside Aunty Ali Golding (pictured to the left above) and Matthew Doyle who literally blew the girls away with his deadly didge playing.

As the assembly occurred only hours after the Australian Parliament passed legislation to roll out another ten years of the NT Intervention (now known as Stronger Futures), I was somewhat pre-occupied with what felt like someone standing on my heart. And my head was pounding with trying to understand how the media had let this significant political moment pass Australians by.

I therefore appreciated being able to share a positive moment of celebration with the students and especially grateful for the words of Year 11 Legal Students Ruby Lew and Isabella Olsson (pictured with me below) who delivered an address that demonstrated a better understanding of Aboriginal self-determination than  Australian politicians in the major parties. Also considering the history of Native Title following the recent release of MABO the movie, I pleaded with the articulate students for permission to post their speech here. And so below you’ll find their words. I hope you share them with others in your circle.

So, thank you SGHS for reminding me that the future is in good hands! And again, Happy NAIDOC Week! 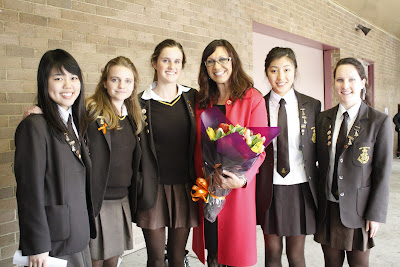 26 days ago, on the 3rd June, Aboriginal people all over the country celebrated the 20th anniversary of what is perhaps the most significant court case in Australian legal history. Unbeknownst to millions of non-Indigenous Australians, for whom the 3rd of June was just any other Sunday, the nation celebrated a decision that overturned the legal doctrine of terra nullius after 200 years.

The Mabo Decision of 1992 was the result of a 10 year long court case lodged initially by Eddie Mabo, David Passi and James Rice in 1982.
Eddie Mabo grew up in the Murray Islands, under the oppression of government instituted racism against the Aboriginal people, at the helm of which was QLD Premier Bjelke Petersen. Eddie Koiki Mabo grew up believing that despite all the government was intent on taking from his people, the Meriam people still rightfully owned the land upon which their ancestors had occupied for time immemorial- the Murray Island.

Eddie Mabo was working at the James Cook University in Townsville when he discovered that this was not true – the Murray Islands were owned by the Crown and the State of QLD.
Eddie Mabo, David Passi and James Rice lodged a claim in 1982 for native title over the Murray Islands. This claim was on behalf of all the Meriam people, or as Rice said:

I was not there for the Rice family but for all the world.

It was Mabo’s strength, perseverance and determination to win legal acknowledgement of the rights of his people that led the Mabo case to its victory.

The impact of Mabo over the past 20 years has been far reaching. The Mabo Decision amended the constitution of Australia to acknowledge the Aboriginal people as the rightful and historic owners of this land. Firstly, and perhaps most importantly, the Mabo Decision was an official acknowledgement of the native ownership of the Aboriginal people over the Australian lands prior to colonization in 1788. It extinguished the ‘terra nullius’ doctrine that had been upheld in Australian law for 200 years upholding the fiction that upon colonization Australia was a ‘land belonging to noone’. Thus the Mabo decision provided, and continues to provide the Australian people with knowledge and acknowledgement of the history of our nation that stretches far, far back beyond 1788.

The Mabo Decision also threw open a gateway for Indigenous land rights claims where they had been previously denied under the ‘terra nullius’ doctrine. As a result of the Mabo decision, 30 Indigenous groups have so far formally established native title. A further 600 claims are pending. 225, 000 square kilometers have been successfully claimed.

It is important to understand that the acknowledgement of native title is unique under Australian law. It is not granted by the Crown like other titles, rather it is an acknowledgement of title that is inherent to Aboriginal peoples as the first owners and possessors of this land. Native title does not require a court case for its existence, but through Mabo it has acquired a method of recognition and enforcement.

Unfortunately, despite the immensity of reform brought about by the Mabo decision in the 1990s, little actual progress has been made since then. Aboriginal people still face serious challenges when trying to achieve the recognition of native title and in the wider picture, fighting for self determination.

Whilst this policy has been officially instigated by both the government and the public, there have been several decisions made in relation to native title that inhibit rights of Aboriginal people and accessibility to legal recognition of their land. Australia went backward in terms of Aboriginal land rights in the early 2000s, and the ramifications of those laws are still being felt. Despite massive support from the Aboriginal community to legally restore native claims, initiatives such as the Howard government’s 10 Point Plan have made it increasingly difficult for this recognition to be achieved. In the last 20 years, only 30 of nearly 600 Aboriginal clans have had native title restored; a mere fraction of the land that has been occupied by their ancestors for thousands of years.

These policies instigated by Australian governments have really inhibited the power of the Mabo decision to bring about great positive change for Aboriginal people. Under the 10 Point Plan, it is up to the people seeking recognition to prove their connection with the land, and this is made extremely difficult under the current legislation. Not to mention, the groups against native title recognition are generally wealthy mining or agricultural companies who have the resources available to pursue lengthy court cases, for whom it is made all too easy to block native title claims in the interest of profits. So, we can see that the battle for land rights that Mabo established is far from over for the Aboriginal people.

Even so, the struggle Eddie Mabo fought to bring about change that was so needed in Australia has left a legacy that continues to influence not only the Aboriginal community, but Australia as a whole. Hundreds of people every year are fighting to be recognised as the original owners of their land, and even more are fighting to achieve self-determination in the eyes of the law and society. Their battles  began with Eddie Mabo, and it’s his legacy that spurs them on.

So next year, on Mabo Day, June 3rd, let us take a moment to remember and recognize the achievements of the Decision whose name bears the remembrance of Eddie Mabo. He was a man whose perseverance and determination changed the face of Australian land law forever, and whose will for change will endure. And let us remember our duty as Australians to strive to protect the millennia long history of this nation and its Indigenous people.
Posted by Dr Anita Heiss at Saturday, June 30, 2012