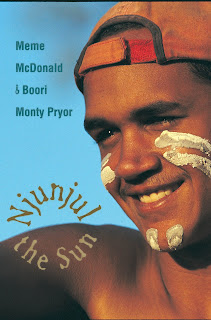 It is true this book first came out in 2002, and that I am only reading it NOW! It is also true that it is the third title in a trilogy about a nameless boy. But I like to do things different to most people, and it was well worth the wait and the change of strategy in starting with the final title. I can safely say though that this book is a gift to Australian teenagers, especially young men. It is a story about the coming of age of one young Aboriginal fella who leaves behind his immediate family in Happy Valley (which he thinks should be called Un-Happy Valley given everyone is always sad) and heads to Sydney. Once there, his aunt and uncle, an attractive uni student upstairs and some interesting men on the basketball court, will help him unravel the teenage demons many young Aboriginal blokes deal with today.

In following his journey readers will share teenage angst, self-esteem / self-worth issues, and self-reflection. But this is not a sad or depressing journey, rather it’s a story told with the trademark humour Boori Pryor is known for in his performances. There are some hilarious vignettes throughout, including the story of how the emu apparently got its name, and how the narrator watches his uncle stretching on the side of the basketball court and thinks to himself, ‘I never stretched in my life. Only thing I ever stretched was the truth when I got in trouble.’

This young lad doesn’t get in too much trouble though, because while he’s analysing his own life and those around him, he is also thinking about important things like football and checking out the chicky-babes, including Rhonda, his neighbour!

Life in Sydney is a world away from tropical Queensland. In the city, his Aunty Em teaches at a multicultural school and is nicknamed Rush Hour because she rushes everywhere, and his Uncle Garth drives a powder-blue Merc. It’s while living with them that he finds a sense of personal happiness, a sense of place, and solidarity on the basketball courts, where he hangs with his Uncle and colourful characters such as Leaping Leeroy, Ritchie Rich, the Boss (who looks like Bruce Springsteen), the Sultan of Swat and the Guru.

Having already made a decision about drugs and alcohol at the age of eight (and having stuck to it!) peer-group pressure once in the big-smoke is handled well. When the lads pass njarndi in his direction, the young narrator declines in a calm, non-judgemental way, saying: ‘I do my thing. You do yours.’  And while he is accused of considering himself to be better than the others, it’s a strong message to young fellas – who don’t want to go down that destructive path – of how to handle such situations.

Identity is an underlying theme throughout the novel and the narrator makes it known that even though he moves to Sydney, he’s still a Murri, not a Koori. Identity doesn’t shift, just because the physical body does.

What I love about this story is that it shows that blackfellas generally can drive nice cars, do yoga, play basketball and be teachers, just like other Australians. And as Aunty Milly points out to her nephew:
There’s good and bad in any place, in anyone, good and bad in all cultures. No uniform’s going to change that. No colour of your skin gonna change what’s in your heart.

Questions about identity challenge the young fella also. He says:

When Rhonda suggests they are both outcasts, it leaves him to ponder…

‘Outcast? I’m trying to think how that sits with those migloo fullas always wanting to call you half-caste, quarter-caste… telling you how to measure what’s in your blood. Maybe 'outcaste’ is like worse. Next to no-caste. Gone see-through or something.’

His identity as a blackfella also means he experiences, as many of us do, often unrealistic expectations through a barrage of questions by whitefellas:
‘Are you a traditional Aboriginal?’
‘Have you been initiated?’
… They ask me what the drawings on the didgeridoo are. What the gecko
means to my people? Is it my totem?

Njunjul the sun is a contemporary, urban story that shows how one young Murri fella struggles to find his inner warrior, while showing respect for his elders, love for his family and exploring his own culture as a form of medicine.
Posted by Dr Anita Heiss at Wednesday, February 15, 2012

I so need to read this book. My lack of knowledge of modern day Aborigines is an embarrassment that I am trying to do something about. I'm currently reading Follow the Rabbit-proof Fence aloud to my ten year old. She and I are learning together.

I love the sound of this series. My boys are entering young adult hood (14 & 10) and I think as Koori kids they will relate to this text quite strongly.

I think the fact that I am finding so many wonderful Indigenous voices in literature through your website is wonderful. It's only a shame our publishers aren't doing more to market them more visibly.

The best way to begin to close the gap and nurture understanding, acceptance and forge a real and lasting relationship between first nations peoples and non-indiegnous Australia is through visual, written, artistic, musical, political voices. We just don't see it enough. (It's out there. It's just not given the visibility it deserves)

Hi Jeanne - As mentioned Njunjul is the third in the trilogy so hopefully you can get your hands on the first two. I've also blogged a list off 99 titles I recommend if you haven't seen it already, it's here: http://anitaheissblog.blogspot.com.au/2011/04/anitas-bbc-black-book-choice-reading.html

I'll have a lot more books listed here in the next few weeks also. Hope you enjoy! Anita

Hi Pirra - I agree, I think engagement in the arts is a fantastic bridge between Indigenous and non-Indigenous Australia. It's one of the reasons I write.

Most of our writers are published through only a handful of publishers and very few are with mainstream publisher who have the capacity to market. Most of are writers are with Magabala Books, IAD Press, some with Aboriginal Studies Press and a number of other small Aboriginal presses. Links can be found here: http://www.austlit.edu.au/specialistDatasets/BlackWords/index#pubs

Thanks for stopping by! And happy reading!
Anita