Inspirational people and positive stories I am grateful for…

It’s been important for me to focus this past week on all that is good in my community and my own personal life and to remain inspired, motivated and mostly hopeful. I have found much food for thought and for the soul in certain individuals and entities, as listed below. I hope you find something in my gratefuls that adds to your own journey. 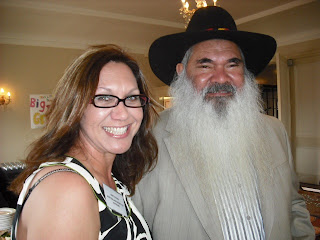 1. PATRICK DODSON: To me, Patrick Dodson is the definition of ‘leader’. He is intelligent, wise, at times witty, and most importantly, has the ability to acknowledge and articulate both sides of a conflict without causing further divide, while still maintaining his own position and integrity.

His capacity to be an agent of change was no better demonstrated than last Monday night when the winner of the 2008 Sydney International Peace Prize delivered the Inaugural Gandhi Oration. To a packed auditorium at the University of NSW, Professor Dodson reminded us that Ghandi was devoted to the search of truth, created the concept of pacifism, and believed in the essence of non-violence as a technique of change.  He also drew parallels between Gandhi’s thinking and beliefs with those who were part of the 1946 Pilbara Strike and the 1966 Wave Hill Walk Off, where peaceful protests brought about real change for Indigenous Australia in terms of working conditions and land rights.

Likewise, he drew parallels between Gandhi’s Salt March of 1930 with Aboriginal footballer Michael Long and his Long Walk from Melbourne to Canberra. Gandhi was seeking recognition and support for India’s independence from the Empire, while Long wanted to get Indigenous people’s lives and issues back on the national political agenda.

The Professor highlighted the Tent Embassy protest of January 26, saying ‘I will always defend people's rights to assert their political position and try to look to the heart of why people feel so oppressed that they feel violent confrontation is the only recourse."

He told the audience that Indigenous people feel the hostile judgements everyday of non-Indigenous people. That we have not seen dialogue on the consequences of colonisation, and that racial discrimination should not be tolerated in any society.

As Co-Chair of the Expert Panel for the Constitutional Recognition of Indigenous Australians, Professor Dodson told the audience that now is the time to make change. That as Australians we can achieve it if we want it. It’s in our hands to make Constitutional change to recognise Indigenous Australians and to have a non-discrimination clause included in our founding document.  Adding, that the recognition of Aboriginal people as the First Peoples – with rights and responsibilities – causes alarm for some Australians. ‘The world must think we are crazy,’ he said, when considering our current constitution.

He made a call to politicians to focus on what is going to bring us together, what is best for the nation. Because it is we, the voting public who put them there, we can vote them out also.

The Professor simplified for the multicultural audience, that since first contact, we have been locked in an endless endeavour of two peoples trying to accept where our place is in this country. But part of the problem is that as a nation state, we have not accepted the sovereign rights of this country’s Indigenous peoples. And there in lies the problem for all of us.
When ‘Australia’s Gandhi’  finished his oration he received resounding applause and a standing ovation. Why? Because Pat Dodson, had in his gentle, yet powerful way, made his audience think about difficult issues without losing them through angry challenges.

I arrived at the venue feeling somewhat disillusioned about the present state of affairs in Australia in terms of not only the undercurrent of racism that exists, but how much of it is also fuelled by a biased and socially unhelpful media. But I left two hours later filled with inspiration, and believing that hope is power. I have a lot of hope.

I am grateful to Professor Dodson for showing me, and the rest of Australia that true leadership does exist, we just need to recognise it, appreciate it and follow it.

[The pic above is of yours truly with Patrick Dodson in Sydney in 2008, at the launch of From Little Things Big Things Grow]

GANDHI: Students queue on graduation day at UNSW to have their photo near a bust of Gandhi on the library lawn– why wouldn’t they? As pointed out by Patrick Dodson, Ghandi’s life and death inspired every human rights struggle. Today I’m grateful for many of Gandhi’s words that bring me strength and inspiration, and I just wanted to share a few quotes. If you also have a favourite, please leave it as a comment below. 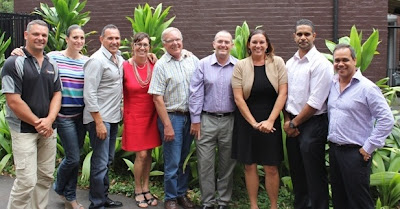 NASCA: I am grateful I am now in my second term as a Director of the all-Aboriginal Board (unpaid) of the National Aboriginal Sporting Change Academy. It is an organization that values integrity, professionalism and cultural pride.  In collaboration with community and Aboriginal young people, NASCA empowers our youth through health, education, sport and cultural programs. As a Director I am part of the governing process that helps determine vision and strategies for growing an organization that has already excelled in delivering programs to kids in remote communities in the NT, Dubbo (Wiradjuri country) and in Sydney. As a Director, I share a board room table with intelligent, effective, inspirational men and women who bring a range of community, sporting and bureaucratic skills. (That’s the handsome bunch above!) As a role model on ARMtours to Mutiitjulu and Papunya, I have seen first hand the impact that our volunteers have on the ground working with our kids and encouraging them to live healthy lifestyles and stay in school. I am grateful I can support my community through the work of NASCA, and to have been able to work alongside the inspirational Michael ‘Magic’ O’Loughlin, who we sadly farewelled at yesterday’s meeting. 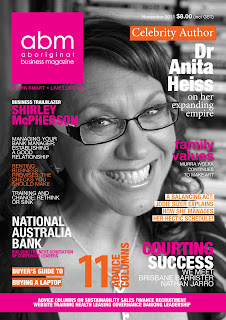 ABORIGINAL BUSINESS MAGAZINE: I’ve been meaning to blog this grateful since the first edition of Aboriginal Business Magazine landed in my PO box back in November. And my gratitude isn’t because I graced the cover (no airbrushing here people!). I’m grateful because this magazine is the first of it’s kind in Australia with positive and professional stories of successful Indigenous people who are role models in business. It’s also a high a quality publication that I understand can now be found in QANTAS Lounges around the country.

As someone who set up their own sole trader consultancy back in 1994, I still have A LOT to learn, and Aboriginal Business Magazine has given me practical knowledge on everything from dealing with my bank manager to marketing, goal setting to  governance to legal issues, even dressing for success! And I’m always looking for another excuse to go shopping.

I take my hat of to publisher Neil Willmett who wrote in his inaugural editorial:  Aboriginal Business Magazine is committed to showcasing businesses so that we create new perceptions about Aboriginal and Torres Strait Islander people. Perceptions which portray us in a positive way as being successful, educated, wealthy, hardworking and intelligent – rather than the negative perceptions that are often portaged in the media.

If like me you’re looking for more positive, uplifting, inspiring and professionally useful stories, then now’s the time to subscribe. I already do!

ME TIME: Finally, I’m grateful I gave myself the time today to write this blog. My ‘To Do’ list is ever increasing, as is my pile of admin stacked next to, and in front of me, but these words were important to me. I hope taking the time to read this today, has been worthwhile for you too!
Posted by Dr Anita Heiss at Tuesday, January 31, 2012

Professor Dodson is such an engaging and thought provoking speaker. A true leader who is able to keep the dialogue between parties open and moving forward.

I am looking forward to getting a copy of Professor Dodson's speech at the inaugural Gandhi Oration. It is one all Australians should read.

Thank you, Anita, for highlighting the work of this inspirational man.

I enjoy you because of your entire effort on this web site. My niece enjoys participating in investigations and it is easy to understand. I just want to share about my work environment or how to be positive follow.

It is great to see people blogging about positive individual's who are respected because of their intellect or moral fibre, as opposed to their wealth or physical appearance. I'm not from Australia, but I applaud your work.

Thanks for your feedback Robin - there is inspiration in many around us on a daily basis, it's important to simply recognise it / them and take from their teachings what we can as individuals. Much peace, Anita