I’m grateful for NYE in NYC 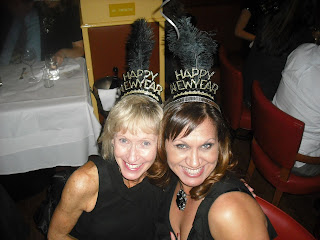 Yes I know this blog is two weeks after the fact, but if you follow me on Twitter you’ll know I haven’t stopped since December 14 when I first left Sydney for my working-holiday to Houston, NYC and Barcelona. Although I’ve done it before, I don’t really want to be punching the keys while I have limited time in another country, and that is why this blog is so late. Forgive me? Truth is, the whole time I was away I experienced wonderful moments, meals, and mischief. And I do want to share the extraordinary time I had for NYE as we passed from 2011 into this wonderful new year that is 2012. I must say first up, that I am not usually a fan of NYE. I have had more failed nights than memorable ones. I have spent a few at the movies and been in bed before midnight a number of times. HOWEVER, being in Manhattan and ‘seeing the ball drop’ had been on my bucket-list for as long as I can remember. And this year, I managed to make the dream come true, therefore making my list a tad shorter. Below is how it all came together, and what I am most grateful for.

1. THE PLANNING: I booked my trip to New York in June and slowly started plotting how my December 31st might look. But it wasn’t until October when I was working in Adelaide with a client Sharon Mahoney (pictured with me above) who fast became a friend, that we decided to see the new year in together. Sharon had already booked a restaurant (details below) where we could apparently experience the Times Square excitement, but still be able to eat, sit and pee (yes all three criteria had to be met!). I invited my dear Aussie-American friend Vanessa (pictured below) and then all we had to do was figure out what we’d wear for this monumental celebration! 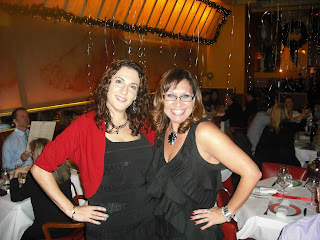 2. THE OUTFIT: Let’s face it, if I was going to do this properly, I had to be looking the part and so were the other ladies and so we took the shopping task seriously. Over a period of days in the New York, and travelling as far as Jersey to get the outfit complete, I managed to pull together the following: a black frock from Ann Taylor on 42nd Street, a blinged cardy from Banana Republic, bling for my neck from White House Black Market Flatiron (just doors from where I was staying) , a gorgeous flag faux fur bag from Kenneth Cole Woodbury Common Premium Outlets, shoes from DSW Union Square that were so high I got vertigo, Dior eye-shadow from Century 21 the discount designer department store and jiffies for wearing on the train home from Duane Read! So, ladies, there’s some of my tips for shopping in New York, because EVERYTHING I got was on serious sale! And of course, you'll have to go to Macy's as well! Oh, and I also got some fantastic bargains at Lord and Taylor on Boxing Day! 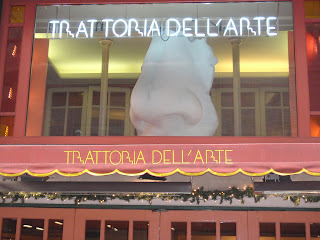 3. THE VENUE: Anyone heading to NYC – whether it's for new years or not – then I recommend you dine at Trattoria Dell'Arte.  It was filled with energy, party-goers, attentive but not in-your-face-sugary-sweet-where-is-my-tip wait staff. The six-course menu on NYE included crab meatballs, Madagascar prawns, cannoli Siciliana, Valrhona Bittersweet chocolate mousse and one or two glasses of bubbly among a host of other delights to choose from. Balloons hung like party-goers from the ceiling, fellow patrons chatted with us, the owners (one Australian) came and joined our party momentarily also. We talked, laughed, ate and it was a meal I wished everyone I'm close to could've been at also

4. THE COUNTDOWN: At 11.45pm we headed outside and joined the estimated one million people who lined the streets around Times Square. The evening was minus the frosty air that had plagued party-goers in previous years. In fact I lost my scarf and was fine! Many who packed the city had been enjoying the hours of entertainment with Justin Bieber and Lady Gaga (who also pushed the button with the Mayor that set the ball off for the 60 second countdown to midnight). The famous ball (covered with 2,688 Waterford crystal triangles and lit by 32,256 Philips Luxeon Rebel LEDs) dropped 70 feet in sixty seconds and we all counted down together. Did I see it? I’m not entirely sure. I saw a lot of things in that direction! And soon after I saw the fireworks behind me in Central Park. Nothing on what we have in Sydney, but that's fine, I wasn’t in Sydney. I was in New York where they don’t sing Auld Lang Syne and young kids don’t pee in the streets because people are so drunk from being down the harbour all day. I loved that I was with families and friends and fireworks in the most exciting city in the world. We took photos, we cheered and yahooed and oohed and ahhed at the sky lit up with the promise of a year ahead filled with only good things. Vanessa and I actually took the time to stand in the street in our VERY high shoes and NYE crowns on our heads and count our blessings. ‘How incredibly lucky are we just to be here?’ we agreed.

5. THE RESOLUTIONS: This is always the big one for everyone. Many make them and break them. Some refuse to make them at all. Others focus only on their physical / health side of life, forgetting their spiritual, emotional and intellectual side. Me, I didn't think of anything to claim out loud on the night, but as often happens when I travel, I had many moments of clarity in the days that followed. My resolution is to become even more aware of what there is to be grateful for life, and also try to be a better daughter and aunty. That of course means having to stay put more, and so I resolve to spend more time in Sydney with those I love most.

Did you make any resolutions?
Posted by Dr Anita Heiss at Friday, January 13, 2012

Hi Anita, so you had a really good time there! Great. I haven't been to NYC for 20 years but going in February with Miriam, so I'l definitely check out the shops and the restaurant you recommend there! Have a great 2012. Lotsa love from Austria. Daniela

Love this post, Anita. Sounds like one incredible evening, wonderful company and a perfect NYE. Love your resolutions and the heart of them most important, family. Wishing you a fantastic 2012 and wherever you are, whatever you do, whoever you’re with, I’m sure it will be brilliant because you appreciate all life’s blessings, especially those you love and who love you. Wow, what a year it’s going to be. Best wishes, Chris.
PS: I'm heading o/s in May and my biggest wish personally and resolution is to appreciate all the nuances and little details. I already know how very lucky I am for the opportunity. Also for being a writer and having the excuse. :)

Hello Daniela - you will have a blast in NYC and I'm going to blog a few more eating places shortly for you to check out! Please say hello to Miriam for me too! Peace, Anita

Hi Christine - thanks so much for your wishes for 2012 and same to you. Have an absolute blast o/s and as I like to say, make time to stop and smell the garlic! Much peace, Anita

You are absolutely forgiven Anita for your tardiness in posting because you have been one busy lady. I have a couple of work related resolutions that hopefully I will achieve in 2012.

Thanks Cathy - hope you manage to get those 'work resolutions' happening this year! Peace, Anita