Five NYC favourites I am grateful for this trip… Every day I spent in Manhattan reminded me of how incredibly fortunate I am in life, and presented me with a list of things I should be and am grateful for. Of course, for the purpose of this blog, I have had to summarise and also focus on what I am happy to go into the public domain (smile!).

So here’s just five of the multitude I am grateful for:

1. BRYANT PARK: I haven’t ice-skated since I was about twelve years old, but I love watching others float around a rink, especially in New York. There are a number of well-known rinks like the ones at the Rockefeller Centre and in Central Park, but this recent Boxing Day I took myself off to Bryant Park where hundreds queued (or lined up as they say in the US) to hit the ice. I find ice-skating a romantic exercise, even when lovers tumble together, and I admire the brave who venture out on the ice when they look like they’d be much safer on cement. I had always wanted to go to the glassed-in restaurant overlooking the rink but always imagined it would be expensive and I’d need to book, not just drop in on a whim. But just as the rest of my trip was a gift each day, I strolled into Celcius  with my companion and we got a window seat easily! It was like a dream come true. Not only did I have the perfect view of the dare-devils below  (see pic above and below)) but I also enjoyed an American staple in macaroni and cheese – but this dish also had white truffle oil through it and a handful of smoked bacon. The arteries celebrated also! It sure beat my usual traditional Boxing Day left-overs of ham and salad! Bryant Park also has fabulous holiday markets   that I strolled through, and without buying a single thing I still enjoyed the experience of chatting to local designers and creators of everything from jewellery to jam!  It was one of the best Boxing Days I’ve ever had… and for that I am truly grateful. 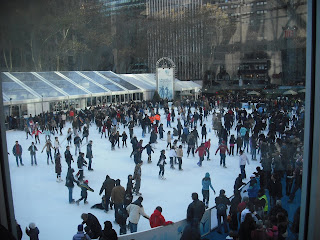 2. THE MOUNTAINTOP: Based on the final hours before Martin Luther King Jn was assassinated at the Lorraine Motel in Memphis on April 4, 1968, the Broadway production The Mountaintop was one of the most significant pieces of theatre I have ever seen. Starring Samuel L Jackson as Dr King and the stunning Angela Bassett  as Camae – the visitor with a message for King -  the play focuses on the hours following Dr King’s memorable speech commonly referred as ‘I’ve been to the Mountaintop’. It is in the motel room when Camae appears as a maid that Dr King is confronted with is impending death. It must be said that while Jackson played the important legend, it was Bassett who stole the show on the night. An extraordinary performance coupled with a significant international story of a man who heavily influenced the civil rights movement here in Australia with his great orations and strength, the night at the Bernard B Jacobs Theatre was one of my most memorable in NYC, especially since I managed to get Jackson’s autograph after the show. Yes I did! That’s it just below! 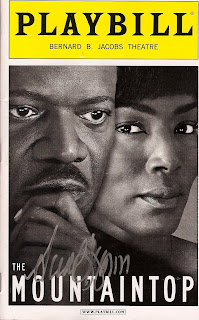 3.  DINE AND WINE:  Yes, I’ve changed the phrase around because food did take a precedence over bevies, but both played a big part in the moments I am most grateful for. The conversations, the sharing of visions, the major politician discussions, the unpacking of writing processes and so on – all occurred while there was food and wine (and the odd cocktail) on the table. Here are some of my favoured spots during my most recent trip and where I suggest you go: Downtown in SoHo head to the Boqueria with some friends for a fun and delish tapas.  You can’t book so go before 7pm so at least you can get a seat at the bar while you wait. Head to the Merc Bar for happy hour then pop across the street to Lure  for a wonderful sushi and oyster bar experience with lots of energy and attentive staff.

For a European experience, do as I did on Christmas Day and take in Blaue Gans for Austrian fare, and try the Kaiserchmarrn for dessert, very authentic!  For a rare good coffee and not in-your-face-service I loved Tarallucci E Vino Union Square but there’s one in East Village, Upper West Side and Soho.

Head up to Flushing and eat in any number of noodle houses, but if you want to go flash then definitely try Mulan the décor was impressive and completely unexpected in this China-meets-Korea market town.

After a night at the theatre get away from 42nd Street and the tourists and head 10 blocks to 52nd  as I did, and hit the Russian Vodka room which was full of interesting, you guessed it, Russians! With some fab cocktails.

After a decent salad (or an extensive wine list) in a groovy neighbourhood, then you’ll appreciate, as I did, the wonderful find on the Lower East Side that is Inoteca I think the waiter started to question my raving about the freshness of the food, but in the middle of winter to have such wonderful salads was bliss for me.

Finally for a decent brekky in an American diner experience, I loved the Coffee Shop Bar at Union Square. Next time I’ll go back for the pie or even one of their Brazilian events!

4. STROLLING: Manhattan is a walking city. I’d say if you’ve got bad knees, hips or feet don’t even bother going. The best part of any visit I have there is just walking the length and breadth of the city and breathing in all the possibilities it has to offer. Anyway, how do you think I (almost) kept my waistline with all that eating and drinking (per above). I probably walked upwards of 6kms a day. And now I smile when I think about all the Avenues and Streets of NYC I sauntered along and dreamed to myself, and for that I am grateful.

5. FRIENDLINESS: New York City is NOT what we see on TV here in Australia. It’s not all fat donut-eating cops (see the gorgeous ones below) and crime-filled streets with no sense of community. Perhaps I just watch too many cop shows! Rather, I have always found NYC a friendly, hospitable and even safe place as a tourist. I asked people in the street for directions and they pulled out their iphones and google mapped it. I asked people on platforms at train stations the best line to catch and they eagerly assisted. I gazed at someone long enough and they said hello. And the staff working in retail (and not working for tips) actually acted like they enjoyed their jobs. And THAT’s what I am grateful for in this massive city of over 8 million people!
Posted by Dr Anita Heiss at Sunday, January 15, 2012

Hello Anita, may I just say I'm very grateful to hear from you and thanks
for your kind wishes . Despite the struggle involved I'm determined to continue writing whatever I can. Your encouragement is invaluable. As ever, you exploits sound as exciting and active as ever...all the best for 2012 and do stay warm over there !

Hey Tez - always great to see you in cyberspace, and glad you are still writing. Have a great 2012!