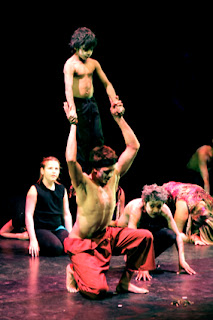 Only July 12 I had the privilege of launching the Marramarra Indigenous Arts Showcase at the Bathurst Memorial Entertainment Centre. I was incredibly proud and happy to be home on Wiradjuri country at the invitation of the Bathurst Wiradjuri elders group.

Marramarra is our language word for ‘make, create, do’ – and we have a long history of cultural producers who have made, created and done and now we have even more who are doing! Congratulations to Arts OutWest, the Central West Aboriginal Arts Development Steering Committee and all the workshop participants and leaders that created the Marramarra Showcase.

Today’s blog is about paying tribute to those who keep culture and heritage alive in Wiradjuri country. The pic above is of the combined efforts of Cowra and Condo kids. The pic below is of the talented Bathurst girls from the Aboriginal Performing Arts Program. 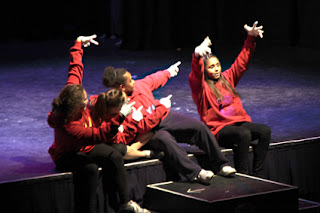 1. WIRADJURI ARTISTS: As I flew to Bathurst, I took the time to reflect on just a few of the Wiradjuri artists I am grateful for and who we should celebrate with pride. We have notable writers including the late Kevin Gilbert and Joy Williams. We also have recent inspiration from Uncle Stan Grant and the multi-award winning young author, Tara June Winch.

Poets John Muk Muk Burke, Kerry Reed-Gilbert, Elizabeth Hodgson and Brenda Saunders come from the Wiradjuri nation, as well as visual artists whose work is known internationally, including the late Michael Riley and Harry J Wedge (who was at the Marramarra showcase also). I’ve personally gained motivation from illustrators like Aunty Isabelle Coe and another of my favourite visual artists as mentioned in my latest book Paris Dreaming, is Uncle Roy Kennedy. 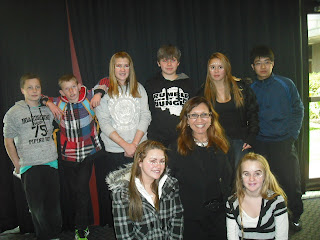 2.COOL KOORI KIDS: Students who performed, showcased and shared as part of the Marramarra showcase came from across the region: Bathurst, Cowra, Lake Cargelligo, Peak Hill, Wellington, Orange and so on. Alongside visual artists exhibited on the day, they demonstrated the enormous talent and creativity we have as a people, and the ongoing culture and heritage that is being Wiradjuri today. Pic above of the Cowra High School Wagambirra Dance Group (plus a fabulous Japanese Exchange student Kyohei. Pic below is of Bruce Carr from Wellington. 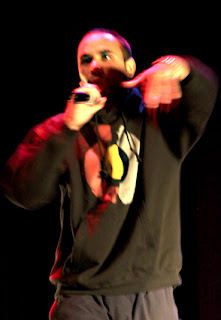 4. KERRIANNE COX: It was a bonus surprise to see my deadly sister Kerrianne Cox at the launch Marramarra. KC and I first met at a Kungka Careers Conference at Yulara in 1998, and her soothing sounds were as spiritually moving then as they are now. Pic below of Kerrianne and I. Check out her website and do yourself a favour and get hold of her CD! 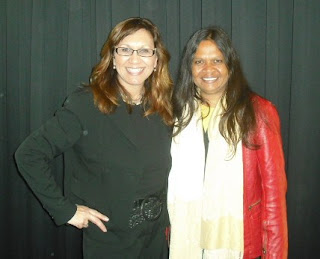 5. ELDERS: A highlight of the day was meeting and connecting with Wiradjuri elders, especially Aunty Wynne Allen. My Mum wore Aunty Wynne’s veil when she married my father at St Vincent’s Church, Redfern in 1960. 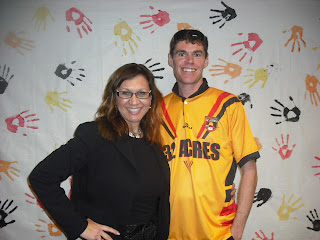 5. JOSH SIMPSON: Finally, while I’d read the work of performance poet Josh Simpson before, I’d never seen him in action. Josh opened the showcase with a poem and also gave a moving performance about the Wiradjuri Warrior, Windradyne. I am grateful for much at the launch of Marramarra, especially the opportunity to experience Josh’s words come to life on stage. The pic above is of Josh and I, and below, courtesy of Josh, is a copy of his poem ‘Windradyne’.

More than 200 years ago,
Lived a Wiradjuri Warrior named Windradyne.
He became well known to the settlers as,
One of the fiercest of his times.
He lived around the Bathurst area,
Beside the river, along the plains.
And he'd freely seek out shelter in scrubland,
To get out of all the rains.
When the white settlers crossed the mountains,
And invaded Wiradjuri lands.
Windradyne and his people could do little to stop them,
They had thunder sticks in their hands.
But like anyone would Windradyne resisted the invasion,
So the whites declared Martial Law.
They placed a price on Windradyne,
And were out to kill any Koorie that they saw.
But they never killed old Windradyne,
He was cunning and too sly.
He led ambush attacks on the white settlers,
He caught them by surprise.
He was given the name Saturday by the whites,
Because that's when he'd attack.
He was known as a Chief, Leader and Warrior,
Of all the Wiradjuri blacks.