What is award-winning author Alex Miller grateful for? 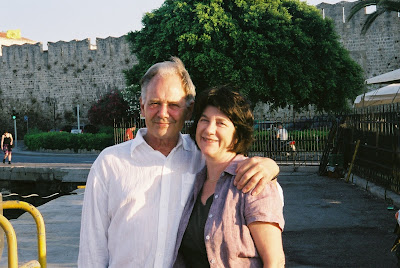 I met Alex Miller in Hamburg in 2004 and we became mates instantly. Apparently I am the inspiration for one of his characters – Vita – in Landscape of Farewell. So, when he asked me to be part of the ‘Alex Miller Symposium’ at the University of Sydney, I naturally said yes. The highlight for me was having the privileged task of introducing the stars of Alex’s Miles Franklin Award-Winning novel, Journey to the Stone Country. Liz Hatte and Barada Elder Frank Budby are the inspiration for the characters Annabelle and Dougal, and they are fabulous storytellers themselves, sharing with the audience their own responses, and the locals responses, to the novel set in central Queensland.

While Alex is in Sydney, I asked him what he is grateful for...

What Alex Miller is grateful for:

Meeting my wife Stephanie made sense of my life for me. And when she said she wanted a baby I discovered what trust was all about. Then when our son Ross was born I discovered what happiness was. It all made sense suddenly and I began to work at my writing with a new purpose. Then Stephanie said she wanted to have another child. "Hang on a minute," I said. "We already have a child?"
"I want another one," she said, and she gave me the kind of look I had learnt not to argue with. But I was feeling truculent. "One's enough," I said. "no more children." I was being the man. Laying down the law. You know?
Steph tightened up that look and said, "Okay. No more novels."
I thought about that for a moment and offered a compromise. "Okay," I said. "One more child."
In due time (nine months later), the light of my life, Kate, was born, me and Ross watching on. Grateful is not the word for it.

Then (this is a story) some years (decades) later Ross had two children of his own and I became grandad (which some of my corny friends had been calling me for some time). Being a real grandad playing in the garden with a real grandchild who thinks you are wonderful and is happy whenever it sees you is something else to be grateful for.

We thought we might add an en-suite bathroom to the guest room. The idea that workmen would turn up (eventually) and begin tearing down walls and playing their transistor radios loudly all day gave me stomach cramps. Then I thought of my long dead mother. My mother had the gift of happiness. That is she knew when to be content. I heard her yelling at me, "You have a guest room???!!!" Okay Mum!! Okay. Cool down. We're not doing an en-suite. So what if you can hear what's going on in the bathroom when you're sitting in the kitchen eating your breakfast? I'm grateful to my mother for her gift of knowing when to be content (with the odd slip-up from time to time).

And all the other stuff in my life. My vigour (so far so good) and my friends (how many?). Friends, the best thing. And work. The secret joy of writing. All that.