Aboriginal women writers I am grateful for on International Women’s Day... 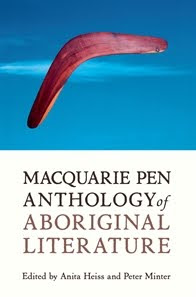 As co-editor with Peter Minter of The Macquarie PEN Anthology of Aboriginal Literature (Allen and Unwin, 2008), I had the extreme good fortune to read the thousands of pages of works by largely unheard of Aboriginal women (and men) who documented across genres, the cultural, social and political landscape of our country over time.

Today, I want to pay tribute to five of those women writers who are no longer with us, but who’s words live on to help remind us all of the history of this country, and why we are the nation we are today.

The bios below were collated by both Peter and I as part of the process, and these five women appear alongside 76 other writers published in the anthology.

If you are an educator in school or a tertiary institution make use of the teachers’ guide that comes with this extraordinary showcase of Aboriginal writers and writing.

Today I am grateful for:
KITTY BRANGY: In 1881, Kitty Brangy wrote several letters to her sister Edith Brangy. These letters demonstrate the strength of Indigenous family and kinship ties at a time when the Australian Government was systematically trying to break them down.

MONICA CLARE: A daughter of an Aboriginal shearer and an English woman, Monica Clare was fostered at the age of seven and she and her brother lived in various homes in Sydney before going to live with the Woodbury family on a farm near Spencer. Although well-loved by the Woodbury's, Government officials removed Clare and her brother Dan from their care in 1935. They were separated and Clare was sent to train as a domestic while her brother was sent to a farm. Clare worked for numerous families, then independently at the Wills cigarette factory and as a waitress. She also took secretarial studies at night school.

Clare’s interest in Aboriginal social justice grew from the late 1940s when she became a regular visitor to the Bellwood Aboriginal Reserve while staying with the Woodbury's at Nambucca Heads, NSW. Her marriage in 1953, from which she had a daughter, ended in divorce. In 1962 Clare married union official and Aboriginal rights advocate Leslie Forsyth Clare, and became actively involved in the union’s women's committee. Together with her husband Clare travelled throughout NSW highlighting the appalling living conditions and racial discrimination inflicted upon Aboriginal people.

In the lead-up to the 1967 referendum Clare became secretary of the Aboriginal committee of the South Coast Labor Council, often writing to politicians and passing on complaints of discrimination. She helped establish housing and low interest loans for Aborigines, and in 1968 as secretary to the newly named South Coast Illawarra Tribe she led the campaign to re-house the Aboriginal communities along the NSW south coast. As well as being a delegate to many conferences of the Federal Council for the Advancement of Aborigines and Torres Strait Islanders, she was also active on the International Women's Day, May Day and National Aborigines' Day committees. Her autobiographical novel Karobran was published posthumously.

PEARL GIBBS: Pearl Gibbs was born near Sydney and grew up near Yass in NSW. She became politically active in the early 1930s, supporting Aboriginal workers affected by the Great Depression and gathering information against the NSW Aborigines Protection Board. Gibbs joined the Aborigines’ Progressive Association and assisted in organising the Day of Mourning, becoming APA secretary until 1940. With William Ferguson she established the Dubbo branch of the Australian Aborigines’ League, and during the 1950s co-founded the Australian Aboriginal Fellowship with Faith Bandler and was the only Aboriginal member of the NSW Aborigines Welfare Board. In her later life Pearl Gibbs enjoyed great prominence as an Aboriginal spokesperson.

OODGEROO NOONUCCAL: Describing herself as an educator and storyteller, Oodgeroo (meaning 'paperbark tree') of the Noonuccal tribe of Minjerriba (North Stradbroke Island, Queensland) was an internationally recognised Aboriginal poet, educator, environmentalist and leader in the struggle for Aboriginal rights.
Having lived most of her life as Kath Walker, in 1988 she readopted her tribal name as a protest against Australia's Bicentenary celebrations and as a symbol of her Aboriginal pride. She was educated at Dunwich State School until the age of thirteen, became a domestic servant and then joined the army during the second world war. In 1942 she married her childhood friend Bruce Walker, a descendant from the Logan and Albert River tribes near Brisbane. She had two sons, Denis and Vivian.

Oodgeroo was politically active from the late 1940s and within a decade had become one of the most prominent Aboriginal voices in the country. She joined the Australian Communist Party, the only Australian political party opposed to the White Australia policy, and from the early 1960s held several key positions in the Aboriginal civil rights movement. She was a founding member and Queensland State Secretary of the Federal Council for the Advancement of Aboriginal and Torres Strait Islanders, and a leader of the successful 1967 referendum campaign. In 1970 she was appointed as a Member of the British Empire, and was later chairperson of the National Tribal Council, the Aboriginal Arts Board, the Aboriginal Housing Committee and the Queensland Aboriginal Advancement League.

In 1964 Oodgeroo published We Are Going, the first book of poetry by an Aboriginal writer and the first ever book by an Aboriginal woman. She wrote numerous further volumes of poetry, books for children, a play, essays, speeches and books illustrated by her own artworks. She travelled in China, Europe, the USA and Africa representing Aboriginal writing and culture, and in addition to many awards she received honorary doctorates from several universities. For many years Oodgeroo lived at Moongalba (‘sitting-down place’), her home on Minjerriba, where she established the Noonuccal-Nughie Education and Cultural Centre and for over two decades shared her culture and way of life with thousands of visitors. The grandmother of Aboriginal poetry died in 1993 and was buried on Minjerriba with great ceremony.

IDA WEST: Aunty Ida (as many of us referred to her) was born on an Aboriginal reserve on Cape Barren Island, the second daughter of Ivy Victoria Albeana (Everett) and Henry Isaac Armstrong. In the 1920s the family moved to Killiecrankie, Flinders Island. She married Marcus Sydney West, had one daughter and two sons, and divorced in 1960.

Aunty Ida spent much of her life as a tireless advocate for the Tasmanian Aboriginal community’s rights to land and cultural self-determination. Her many years of struggle finally resulted in the Wybalenna Aboriginal Community’s acquisition of land title on Flinders Islander on the 18th April 1999. As a result of her success she was named a Tasmanian of the Century by the Mercury Newspaper. In her final years Aunty Ida was made a member of the Order of Australia (2002), NAIDOC National Female Aboriginal Elder of the Year (2002) and NAIDOC Elder of the Year (2003).

To read excerpts and complete works of these women, buy a copy of The Macquarie PEN Anthology of Aboriginal literature and make sure your local and school libraries have it in stock for students and community members to engage with, learn from and enjoy.
Posted by Dr Anita Heiss at Tuesday, March 08, 2011

Five amazing women - five amazing lives! What a great project to compile these otherwise unheard voices. I can only imagine how hard it must have been to select the few for publication, while so many stories probably didn't make it into this volume. In a second volume, maybe?

I am Mrs.Irene Query i was in need of a loan of $150,000 and was scammed by those fraudulent lenders and a friend introduce me to Dr Purva Pius,and he lend me the loan without any stress,you can contact him at (urgentloan22@gmail.com) Approvals within 2-4 Hours

$$$ GENUINE LOAN WITH 3% INTEREST RATE APPLY NOW $$$.
Are you in need of a Loan to pay off your debt and start a new life? You have come to the right place were you can get your loan at a very low interest rate. Interested people/company should please contact us via email for more details.

Hello Everybody,
My name is Mrs Sharon Sim. I live in Singapore and i am a happy woman today? and i told my self that any lender that rescue my family from our poor situation, i will refer any person that is looking for loan to him, he gave me happiness to me and my family, i was in need of a loan of S$250,000.00 to start my life all over as i am a single mother with 3 kids I met this honest and GOD fearing man loan lender that help me with a loan of S$250,000.00 SG. Dollar, he is a GOD fearing man, if you are in need of loan and you will pay back the loan please contact him tell him that is Mrs Sharon, that refer you to him. contact Dr Purva Pius,via email:(urgentloan22@gmail.com) Thank you.

In the event that you are some individual who lives there and needs a surprising time, by then you have come just to the correct place and get autonomous high profile escort service in Manali .

Thank you for sharing such great information.
It is informative, can you help me in finding out more detail on
home loan for women.