A handbook of Aboriginal languages 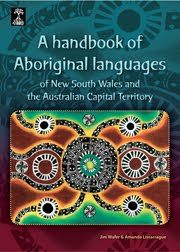 At Emma Donovan’s – the beautiful Gumbaynggirr singer/ songwriter – CD launch in May this year, I met some of her family and elders including Uncle Ken Walker, Aunty Pauline Hooler and Uncle Gary Williams.

Driving back from Queensland through Nambucca Heads in July I decided to drop in and see them all at the Muurrbay Aboriginal Language and Culture Co-operative. The Coop began in 1986 when Gumbaynggirr Elders got together to revive their language and hand it down to future generations. Muurrbay means ‘white fig tree’ in the Gumbaynggirr language, and the organisation aims to support Aboriginal people, particularly Gumbaynggirr, in the revival and maintenance of their language and culture, and so strengthen their sense of identity, self esteem and links to country.

Muurrbay auspices the Many Rivers Aboriginal Language Centre, a regional language centre that provides vital support to Aboriginal communities who want to revitalize their languages; this covers an area from the Tweed to the Hawkesbury River.

I was excited to learn about Muurrbay's publishing wing which publishes a variety of books supporting the revitalisation of the Aboriginal Languages of New South Wales. These include Dictionaries and Grammars that document the languages of New South Wales, particularly those of the north coast of N.S.W, through the Many Rivers Aboriginal Language Centre. Muurrbay also publishes educational resources such as children's stories, student workbooks and teaching tools like Mayalambala, a set of interactive posters and pictures.

The handbook is a guide to Aboriginal languages, with illustrative vocab lists. It’s divided into two parts: the first part, which includes 18 maps, is a survey of the Indigenous languages of NSW and the ACT, and gives information about dialects, locations, and resources available for language revitalisation; the second part provides word-lists in practical spelling for 42 distinct language varieties. There’s also useful information on contact languages, and kinship classification, as well as an appendix on placenames.

There’s also some explanations of the use of Aboriginal sign language in specific ‘dialect areas’ – with examples of how to ‘sign’ to ‘sit down’ ‘salt water’ and ‘peace’ in various language regions of NSW.

The handbook is a valuable reference and educational resource, useful to Aboriginal people who want to revitalise their language.

It’s probably not something that people will be able to afford at home but it is DEFINITELY something to encourage your school library to order in and your local library.