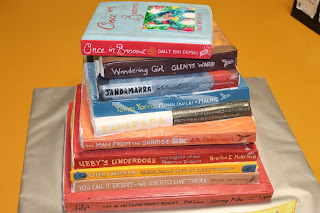 How cool is this birthday cake made like Magabala titles?
Magabala Books in Broome published my first book Sacred Cows in 1996. Without them I wouldn’t be an author today, so I was thrilled to be invited, as part of the Corrugated Lines festival, to speak at the party celebrating Magabala’s 25th anniversary. Cancelled flights may have kept me away, but wild horses couldn’t, and so I rocked up at dusk on Friday night just gone and joined with 200 locals, tourists, board members, staff and other writers in applauding the work of one of Australia’s most culturally valuable publishing houses. Below are some of my notes from the night. 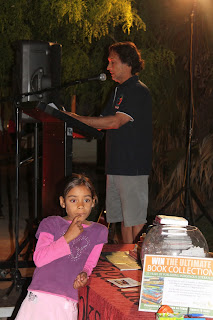 
In 1994 I had an idea: I’d write a book, just one book, about white Australia, because there were so many books about Black Australia written by non-Aboriginal people, it was time to turn the table. I set about and wrote a manuscript called Sacred Cows looking at Australian icons like Skippy, Vegemite and the backyard BBQ. I submitted it to a number of publishing houses in early 1995, then in July of that same year while working for a First Nations newspaper in Canada I received a letter saying that Magabala Books had accepted my work for publication. I was no different to any other first time author: I can remember where I was at the time the letter arrived, who I was with, what I was wearing and the celebration that followed due to knowing I was going to be a published author. Every first time author has a level of excitement only they know. It’s called the first time authors club.
I knew nothing about how the publishing process worked back then, nor editing, layout / design or marketing. And on top of me being a control freak, the publishing process turned out to be a challenging experience for author, editor, designer and publisher. But I remember fondly the launch of Sacred Cows 18 months later at a function at the original Boomalli Aboriginal Artists Cooperative in Sydney, and how excited I was to be an author. I’d like to acknowledge my editor back then Rachel Bin Salleh for her work, and I’m pleased to say that I am still friends with Sam Cook the designer, and will be speaking on a panel with publisher Bruce Sims in Melbourne November.
But now, 16 years after the release of my first book, it’s hard to believe as I stood there in Broome, the road my life as taken and my place in Australian literature today. Four adult novels, three kids novels, two collections of poetry, a text book and numerous anthologies later and I am indeed, living the writerly dream. Last week I spoke to Aboriginal girls in Brisbane about writing. Last Friday morning I spoke to Aboriginal boys at the Clontarf Academy about writing. I get do to those (voluntary) talks because many years ago Magabala gave me a break.
Being at the 25th anniversary celebration gave me the opportunity to thank the organisation – the board and staff from back then - for giving me the springboard into the Australian publishing industry where I have made my career and where I am most happy. Without my first book I’d never have written the second, third and so on. Being a writer has taught me a greater appreciation of the importance of storytelling in all forms and for all audiences. And I think that is also something Magabala titles do; they help readers understand the role of stories and books in our everyday lives. 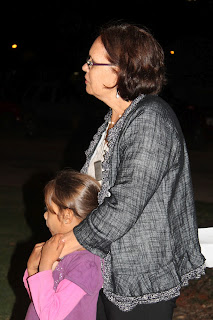 Magabala Treasurer and author Edie Wright and grand-daughter
Since releasing Sacred Cows I have become a staunch supporter and advocate for Magabala Books, promoting, showcasing and reviewing publications and always recommending titles to the thousands of teacher/librarians I speak to as part of my every day business. Getting our titles, your titles, Magabala titles on curriculum and into classrooms is my goal when presenting to educators.
I have said many times, and believe firmly that Magabala Books publishes some of the most beautiful, valuable and culturally rich children’s books Australia could hope to have.  Some of the books I have raved about as useful in the classroom environment as stories with morals and purpose include Nana’s Land, Creatures of the Rainforest, Dingo's Tree and Tell Me Why.
Only a few weeks ago, I learnt the history of AFL in the book Marngrook and then started watching the show on the ABC, which for those who know me is an extraordinary effort as I really have little interest in any code of football. But when its history begins with blackfellas, well, there’s a whole new level of interest.
Last year I fell in love with Dub Leffler’s book There once was a Boy – in fact in my review I stated that it was possibly the most beautiful book I had ever held in my hands. I’d like to congratulate Dub and Nola Turner-Jensen for their latest release The Sugar Bag. The deadly books just keep coming.
In terms of life stories and memories, I cherish Glenys Ward’s Wondering Girl and I use and I use Albert Holt’s Forcibly Removed in my teaching. I launched with pride Lorraine McGee-Sippel’s Hey Mum What’s a Half Caste, which has as a central theme the importance of family. These are works that changed the way Australians look at their own history and the inequities between black and white people. 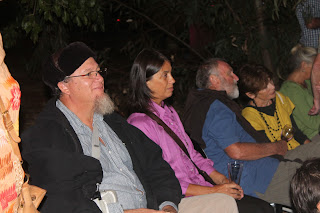 On the flight over to Broome I read the eloquent yet powerful Ruby Moonlight  by Ali Cobby Eckermann, which followed closely on my reading of Grace Beside Me by Sue McPherson, and it’s now I’d like to also congratulate Magabala for being the most proactive of our Indigenous publishers in finally being part of Black+Write as a process that helps to develop the skills base of indigenous people working in publishing, namely editors.
And of course I can’t live without my Magabala Diary, which also makes a fabulous gift. It’s fair to say that Magabala plays a role in my daily life, we stalk each other on Twitter also!
Finally, I’d like wish all the Magabala family a very happy 25th anniversary and to thank you all for making the dreams for people like me – a girl from the suburbs – come true. 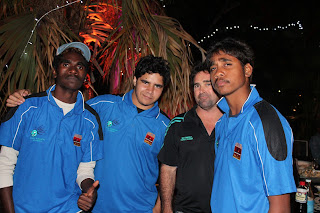 And thanks to the deadly Clontarf Academy Boys for their service skills!