Why I love THE FAMILY LAW! 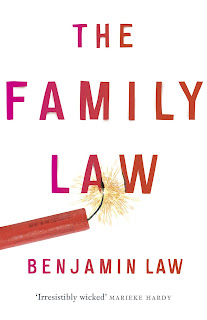 This is not a review of Benjamin Law’s book, rather, just a few words on why the story of his family growing up on the Sunshine Coast made me gasp with laughter (and shock) to the point I could not put the book down. I also picked it up at a time when I was feeling blue and the work lifted me to a wonderful high again.

The Family Law  is a series of incredibly personal, shockingly detailed and often hilarious anecdotes about Ben growing up as the third of five children to Chinese parents. We are generously welcomed into their home, their intimate conversations, holidays abroad and everyday lives. Most significantly, we get a window into Ben’s memories of his youth, not being as blokey as his older brother, living through his parent’s breakup including the practicalities around weekend visits with his father to every possible theme park on the coast. We are also given an insight into the story of realising his own sexuality (possibly first made obvious at a family fashion-parade where he took a shine to the tights!)

But the fun begins on the first page! I mean you’ve got to love a book that opens with a chapter on the Law family’s personally created dictionary, which includes Mum’s own word for ‘scrotum’ and the phrase ‘commence seduction’, which must be said with ‘robot movements’.

Ben uses his own brand of humour to deal with stereotypes, for example, “Despite being Asian, you’ve never been any good at maths!" But then proceeds to do some serious statistical work at the age of eleven, when he lies awake at night working out the odds of meeting  a gay man who he can love, and who will love him back. The numbers were incredible and of course, many of us lie awake at night wondering that same thing in terms of meeting the right one to love! I’ll see if Ben can work out the hetero stats as well!

A friend of mine stayed over from New York last week. She finished the book in a night, she couldn’t put it down either.

If you’re like me, a part of you will wish you could hang out with the Law family long after you’ve finished the book!

The Family Lawwas my 20th book in my 52 books in 52 weeks reading challenge during  in this year’s National Year of Reading!
Posted by Dr Anita Heiss at Saturday, April 07, 2012

Am loving this at the moment - thanks for the recommendation.

but, I will say, that I am very grateful that nobody asked me WHY I was giggling out loud as I was reading through Chapter Two in the staff room today!! ;-)