Extraordinary women I am grateful for this week...

As I write this I am squinting to gain focus on the screen. It would be an understatement to say I am utterly exhausted. I am going into week eight of publicity for Paris Dreaming while also trying to keep on top of my every day life: family, friends, healthy lifestyle, and the odd (and much needed) paid gig.

But every day, yes, every day, I am inspired in some way by the extraordinary women who cross my path, and share the stage and / or meals with me. I am grateful for what they contribute to my own evolution as a woman, and as an artist.

Today I am grateful to some special women who have been part of my writing journey in the past and especially this last week: 1. LIBBY GLEESON: This year I was given the great privilege of being the invited dinner speaker for the NSW Premier’s Literary Awards (thus the pic above!). Held in the marquee at the Sydney Opera House overlooking the most stunning harbour in the world, I spoke about the responsibilities we have as creators to write with integrity and a code of moral and professional ethics. Within that speech I quoted Libby Gleeson, my mentor on the novel Who Am I? the diary of Mary Talence, Sydney 1937. As the multi-award winner author of over 30 books, Libby has remained an inspiration to me in terms of my own writing largely because the sense of responsibility she maintains in her own work. Libby says: ‘I write to work out a truth. Anything sensational or gratuitous has to go as I try to wrestle my way down to a subtle understanding of human beings and behaviour. My responsibility is to the story and its characters and to my own integrity.’

You can imagine my absolute excitement then when it was announced after my own speech, that Libby (sitting two seats from me on the Premier’s table) won the Premier’s Special Award for lifetime achievement. You can see by the pic below that Libby, Chip Rolley (Artistic Director of the SWF) and I are all thrilled to bits about Libby’s recognition. Well deserved. I was / am grateful that I have such an extraordinary women as a mentor and friend. 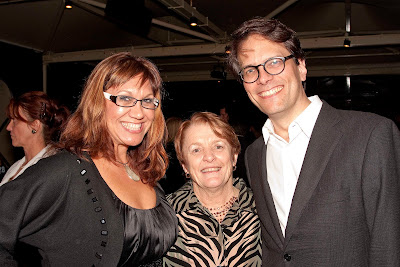 2. KATHRYN HEYMAN: Within that same speech on Monday last, I also quoted my friend and mentor (yes, I am greedy I need more than one!) –Kathryn Heyman – whom I first met at the Byron Bay Writers’ Festival back in 2003. We started planning and plotting straight away about how we could work together to support Indigenous writers, and I still use exercises and techniques gained from a master class Kathryn ran at Macquarie University back in 2004.

Kathryn was one of the judges of the Christina Stead Prize for Fiction at this year’s awards, and Kathryn’s words in my speech in relation to the responsibility of writers were: ‘Social theorist Jurgen Habermaas held that all language points in the direction of truth and is distorted when it veers away from truth. Actually, the very first thing its possible to do with language is to make up stories that are not true. So there is, in my opinion, a moral responsibility for every storyteller to decide what they are going to do with that power. If as writers we fail to engage with that fundamental question of ethics, then it's an enormous failure of courage.’

My actual goal that night was to inspire the audience – authors, editors, publishers, agents, media etc – to consider their own responsibilities and to write and publish with integrity and courage. I hope went some way to doing that. 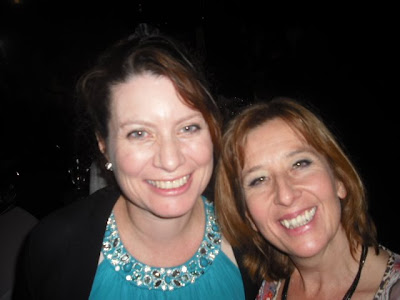 The pic above is of Kathryn with Suzanne Leal, another deadly writing chick – author of Border Street.

3. PAULINE WHYMAN: Way back in 1992, when I was younger, thinner, cheekier and a little less focussed on ‘goal setting’ than I was on partying, I met a young woman by the name of Pauline Whyman. We shared a room at an Indigenous writers’ conference in Victoria for a week, and had a few laughs, a few drinks, a few hairy moments walking home late at night… and we shared a vision of being something of note in the arts sometime in the future. Even if we couldn’t see what that was in the dark of the Victorian Grampians at the time. Last Friday night I watched my sista on the big screen at the Capital Theatre in Melbourne to a packed house for the premier of Here I am by Beck Cole. I was so proud to see how Pauline had blossomed, not only as a woman but as an extraordinarily gifted actor, and a role model for other women. I am proud and grateful to be able to call this solid actor and filmmaker my sista, and to know that her star will guide the way for other young Koori girls to follow their dreams as well. [That’s Pauline and I below… isn’t she beautiful!?] 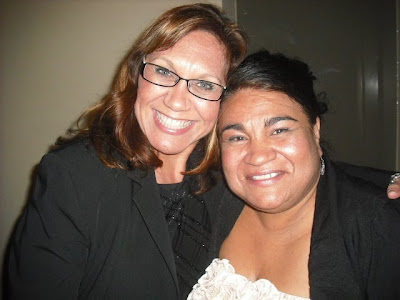 4. BELINDA DUARTE: I was actually in Melbourne at the invitation of the Long Walk Team headed by Kim Kruger, who asked me to do an event around Paris Dreaming as part of the Long Walk day of festivities in the heart of the city. My tidda Belinda Duarte, a national heptathlete (that’s someone who does SEVEN track and field events, yes SEVEN!) is not only deadly as a medal-winning sportsperson, AND at chairing the National Aboriginal Sporting Chance Academy, but as it turns out, she’s also an amazing literary critic and interviewer. I am constantly blown away by Belinda’s capacity to analyse and draw out issues and conclusions, whether it’s in board papers, or, as it were, my novels! I’m a little awestruck by Belinda, I’d like to be her when I grow up but I fear I’m better and doing the quick walk to the canteen and not around a sports ground! 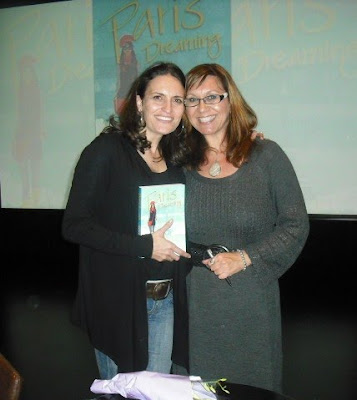 5. NEW FRIENDS / OLD FRIENDS: It was a stunning day in Melbourne on Saturday, clearly I’d taken the Sydney weather with me. Federation Square was a hub of activity with bands, comedians, Koorioborees, the Message Sticks Film Festival and so on. It was a hard ask to expect old school friends, new Twitter friends, past colleagues and random punters to head into Studio 1 of the Australian Centre for Moving Images to hear me yarn about Paris Dreaming… but they did. And I want to just acknowledge those fabulous women (and one bloke) who sat in the funky space and laughed, listened and perhaps even learned a little about the complexities of living as a contemporary Aboriginal woman. I am grateful to you all for giving me some of your precious weekend.
Posted by Dr Anita Heiss at Monday, May 23, 2011

It was a pleasure and an inspiration to be in your gorgeous company Anita! Thank you.

Thanks M - loved sharing a yarn afterwards with you and the gals too! Much peace, Anita

Great to see all these inspirational women like Belinda Duarte and Pauline Whyman acknowledged. My daughter enjoyed the Paris Dreaming session. Had a lot of take home tidbits to mull over. Thanks for coming to Melbourne.