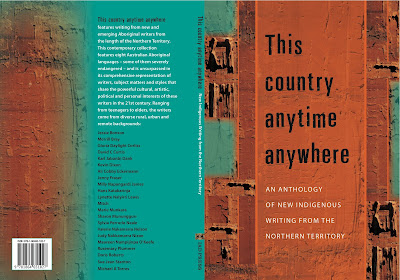 22 talented Indigenous authors, diverse in age and backgrounds, share their cultural, artistic, political and personal interests of being Aboriginal in the 21st century, in the recently released This country anytime anywhere the first multilingual anthology.

This country anytime anywhere is a contemporary collection of writing from emerging authors, as well as many award winners, including Marie Munkara, winner of the 2008 David Unaipon Award for Every Secret Thing (also judged the 2010 Northern Territory Book of the Year).

IAD Press Editor, Allison Thatcher says, “This country anytime anywhere is the first anthology of Indigenous writing to include translations from English into eight Aboriginal languages from the length of the NT. These translations have added something extra special to the featured works”.

Sandra Thibodeaux of the NT Writers’ Centre explains, “The initial phase of development involved workshops and consultations with over 100 NT Indigenous people, some already writers, but most were newcomers with an interest in telling their stories”. “From the enormous amount of works received, the writers selected represent Central Australia, the Barkly region and the Top End. It was particularly exciting and inspiring to see the talent flowering from the Barkly region, considering it's located so far away from either Darwin or Alice Springs”.