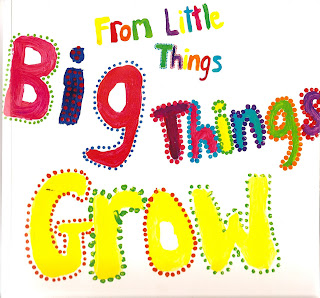 We have a new national anthem, yes, we do. We don’t need a referendum on it, just accept it as given. Trust me.

It’s called From Little Things Big Things Grow and it’s about the Gurindji Wave Hill walk-off in 1966 – a fight over wages and conditions that ended in a battle for land rights. It’s about the proud Gurindji people and their stand against the might of the cattle baron, Lord Vestey.

The stand was political activism by a mob with no citizenship rights at the time, but strong in Aboriginal pride and courage as they fought for basic human rights on their own land.

It is a story that ended in 1975 when Prime Minister Gough Whitlam poured soil into the hands of Gurindji elder and activist Vincent Lingiari. It was an act that symbolised the return of the land to traditional owners and many will know the iconic image by Merv Bishop documenting in my mind, one of the most significant moments of our time.

The song From Little Things Big Things Grow was written by Paul Kelly and Kev Carmody as they travelled through Queensland in the late 1980s, and it has now been released in book form so that young Australians can read, sing and learn about this shared history.

Indeed, there is a Gurindji interpretation of the song in the book as well. How wonderful would it be to have our national anthem in an Aboriginal language!

What inspires me most about this publication is that this book project has given new meaning to the word ‘collaboration’. There are so many organisations and individuals on this project that if everyone involved bought a book it would make the bestseller list immediately. Of course, that’s not the goal of this book, education is, as is the revenue required to build a new art centre for the community.

In a nutshell - the book, like the song itself was inspired by the late Vincent Lingiari who lead the Gurindji / Wave Hill Walk off. It is also a tribute to Frank Hardy, the left-wring writer who brought the plight of Aboriginal Australians to international attention with his book The Unlucky Australians in 1968.

On the page the song words come alive with illustrations by the kids from Kalkaringi in Gurindji Country. I was so excited and inspired to meet some of them at the launch and was like a groupie waiting to get an autograph and photo. The future of Aboriginal literature and publishing is as bright as bright and wide of the smiles of the students who I met at the launch.

The kids’ artwork sits alongside paintings by QLD artist Peter Holden, who made his first trip to the Aboriginal communities of Daguragu and Kalkarinji in the NT back in 1998.

From Little Things Big Things Grow is published by One Day Hill (which is owned and run by Bernadette Walters) and was a collaborative project with Shirley Hardy Rix – daughter of the late Frank Hardy) and Affirm Press, and all profits raised from the book will go towards art and literacy projects for Gurindji children.

Funds from the project will be channelled through the Ian Thorpe Fountain for Youth, which focuses on Indigenous literacy projects in the Northern Territory.

The project Patron is Tom Uren who was the first person to raise the plight of the Gurindji in parliament after the Wave Hill walk-off, and was instrumental in the successful outcome of the strike.

Why you should buy a copy of From Little Things Big Things Grow
I know I don’t even have to write anything here. It’s obvious!

This book needs to be in every household in Australia. In every classroom and every library. Hell, I think it would do well to be in doctors waiting areas. It is essential reading, urgent reading. It is a story that EVERY Australian SHOULD know. And it is a song that everyone should sing.

From Little Things Big Things Grow is a gift to our children, and no more obvious was this to me than at the launch at the Peace Centre, Sydney University. As Jeff McMullen MC’d and 2008 Sydney Peace Prize winner Pat Dodson launched the book, and Jock Vincent (Vincent Lingiari’s son), Gurindji elder Gus George and Peter Hudson all spoke about the value of the project, I smiled as I watched the children in the room sitting quietly on the floor as the speeches continued. Fully engrossed in the colourful pages I watched them going through the book fingering the words as they read them. The target audience, young Australians, were already proving that this is a fabulous book. A book they want to read.

Buy it for everyone you know for Christmas. Parents, children, siblings, friends, colleagues.

From Little Things Big Things Grow is available at good bookshops everywhere for $19.95. A special hardback edition is also available for $29.95