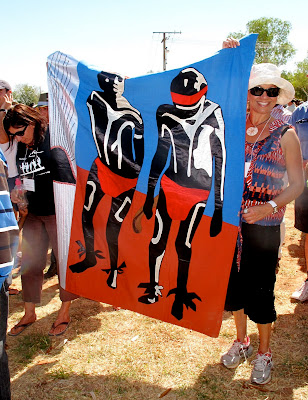 Last week I flew from Sydney to Darwin and then drove 800km in a convoy via Katherine to Kalkarindji and Dagaragu, the home of the Gurindji nation (and supported by the associated  nations of the Malgnin, Mudpurra, Bilinara, Nyarinman and Warlpiri peoples). It was there that I felt the strength and dignity of those who walked off Wave Hill Station (then ‘officially’ owned by British Lord Vestey) some 45 years previously. The protest was a demand for rights to their traditional country, and to be treated equally with other Australians employed on the land.

Like most others, I went to Wave Hill to pay respect and to show gratitude to those who paved the way for the land rights movement nationally, and to acknowledge the great strength those involved demonstrated in the face of absolute racism and adversity.

On Friday, August 26 to mark what is now known as ‘Freedom Day’[1] I marched also, along with local community members, friends and writerly peers, and those who had travelled the country over to be part of the celebration.

We were there also to pay homage to the memory of Gurindji/Malgnin leader Vincent Lingiari  and to remember the significant and symbolic gesture of the then Prime Minister Gough Whitlam pouring red earth through the local leader’s hands back in 1975. It was a moment that marked the return of the ancestral lands to the Gurindji mob and yet, it was a moment declared null and void with the introduction of the 2007 NT intervention which shifted the power of Aboriginal lives and land away from individuals and communities, back to the Commonwealth Government.

So the celebration was also tainted with the reality of life for the local Gurindji mob today, and their new fight for old rights and to somehow maintain the freedoms they fought for in the ‘60s. But we remembered the past with a sense of hope for the future as we sat in the Territorian heat with red dust on our skin, listening with passion to the stories of elders who were part of the Walk Off back in 1966. 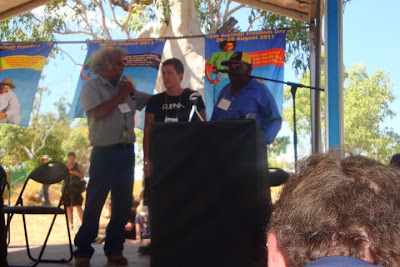 With the event coordinated by Gurindji/Malgnin/Mudpurra woman Brenda L Croft (also an artist, curator and academic) and MC’d by Vincent Lingiari’s grandson Maurie Japarta Ryan (who I actually went to uni with back in the early 1990s and both pictured above), we heard from staunch non-Indigenous unionists who played a key role in activating union members nationally to fund raise to support the Wave Hill mob. Aboriginal rights campaigner and one of the first to step-up to assist the Gurindji cause, Brian Manning spoke with passion about his role supporting Vincent Lingiari, and stated in his address  that ‘The Walk-off succeeded in 1966 because of the unity of the people to stay solidly together in the face of all sorts of inducements .  To decide on a course of action and remain united to achieve what you decided. That is the job ahead. You can do it!’

Another speaker, Jack Phillips of the Waterside Workers Union who was involved in the Aboriginal rights campaign 1966 ­– urged the politicians on the day – including the NT Chief Minister Paul Henderson – to go back to their parties and "make them pull their socks up". 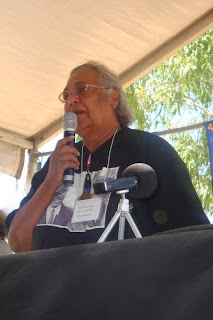 The highlight for me was not only hearing the role the unions played in supporting the protest, but also hearing from local Elders including Speedy McGuinness, Tim Vincent, Rosalie Kunoth-Monks (pictured above) and Michael George. I have to admit that there was much said in local language that I didn’t understand, but emotion wasn’t lost in delivery, especially when humour encouraged laughter from locals in the audience.

A message delivered by the Central Land Council via Ngarla Kunoth-Monks demanded a formal government apology for the "shame, hurt and trauma" the intervention caused Indigenous Territorians, stating:

'Throw the word ‘Intervention’ away.  We demand an apology from out governments for the terrible
recent policies that encourage assimilation and ‘normalisation’ – this amounts to cultural genocide.'

Following formalities, we were treated with dancing by the local women before the crowds made their way down to Wattie Creek for a community BBQ. My head was spinning, my heart a mix of confusion – celebrating the past, concerned for the present and half-hopeful for the future – and so I headed back to the campsite to reflect on a most extraordinarily emotional morning.

There I sat below gum trees at a picnic table surrounded by three huge campervans; the tent for the urban camper like me. To my left sat my playwright friend Cathy Craigie yarning with Steve McCann and David Claudie who had travelled from Cairns. To my right in the distance I saw Dan Sultan with his entourage resting under a canopy. Nearby was Josie Crawshaw working on the Vincent Lingiari address which she would deliver with passion the next day.

I sat there wanting to write but it was near impossible, even for someone who can knock up a draft 90,000 word novel in eight weeks. You see, I am a Wiradjuri woman. I come from central NSW and have lived most of my life on the land of the Dharawal in Sydney. I am the beneficiary of the sacrifices of the old people I went to Wave Hill to honour. We in the state of NSW enjoy the land rights that were born out of the protests made by the Gurindji people, lead by Vincent Lingiari.

With this in mind, I kept asking myself: how many of my extended family, my friends, my fellow Australians (black and white) know the true story of the Wave Hill Walk Off? And more importantly, how many understand these very same people, this very same community, have also been stripped of their self-determination, their sovereignty, their human rights, because of the racist NT Intervention.

I couldn’t write then, because in many ways I couldn’t breathe. My heart was filled with pride and yet heavy with sadness simultaneously. Does that make sense? 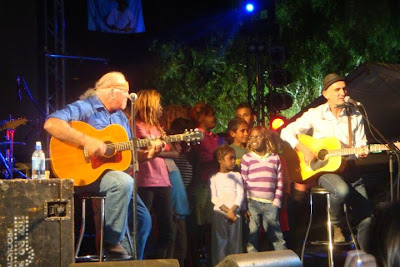 I put my spiral-bound notebook away and just yarned with those around me. That night I watched Kev Carmody, Paul Kelly (pictured above with local kids on stage and Dan Sultan sing the theme song of the Lingiari / Gurindji protest: From Little Things Big Things Grow. It was a moment that still makes me weak when thinking about it. It is a song that I believe should be our national anthem. It is a song that I have used to teach my nephews about land rights, about how the mob in the NT have lead the way for all of us. I’m not sure if they understand just yet (they are 11 and 13 years old). But for the 50th anniversary I hope to take them back there with me. 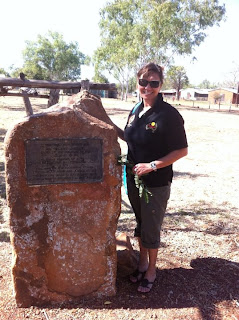 The next day, Saturday, 27 August, I visited the Wave Hill monument and as I strolled up to the space I met a woman named Marie Djaban who said she was there the day it was unveiled. She came back with us to the hall where staunch advocate for Aboriginal rights Jeff McMullen set the scene for us to hear Sue Stanton and Josie Crawshaw, both with familial connections to Gurindji country, give their heartfelt addresses as the inaugural Gurindji Walk Off from Wave Hill Memorial Lecture. Sue reminded the audience that the Gurindji walked away from harsh and cruel conditions and to protect the women in their tribe. 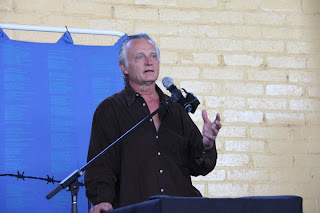 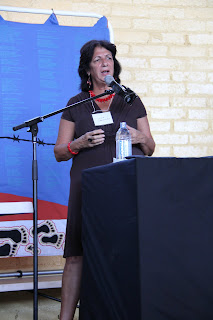 In a heart-wrenching speech, Josie not only honoured Vincent Lingiari and her mother, but also her beautiful uncle who died an undignified death in 2006. His story served to demonstrate the ongoing mistreatment of Aboriginal people in the Northern Territory.

Josie also talked about what she called the ‘Least and Most Peoples’, highlighting that Aboriginal people have the Least (housing, education, health) and the Most (deaths in custody, unemployment) and that communities in the NT had been reduced to working for rations again with the introduction of the Basic Card.

I was inspired by an oration by Monica Morgan, Yorta Yorta woman working for Amnesty International, who like all of us, stood in solidarity with the Gurindji and reminded the audience that ‘Their fight is my fight. Their fight is our fight.’

On a lighter, more celebratory note we all gathered at the new art centre in Kalkarindji for its opening, inaugural exhibition and an art award presentation (see pic below). It was a stark reminder to me at least, that while government policy can remove the rights to land and economies, they can NEVER stop our people documenting our histories and our stories through art. I was thrilled to see so many paintings being snapped up and am sure that the cultural economy (while no other) is allowed to grow there. 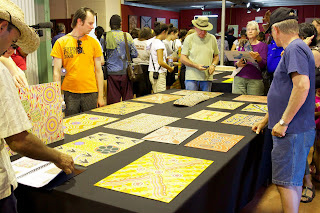 That night, under a blanket of stars, we visitors to Gurindji country – sat with locals and enjoyed the MCing-style of Mary G who flirted shamelessly with performers and audience members. To see out the day we listened to the sounds of Joey Geia, the Black Arm Band, Shane Howard, Warren H Williams and Dale Huddleston and the Riverbank Band.

On our third and final day there, guests were witness to the passion of the next wave of activists as a group of young Aboriginal people took to the stage to discuss their concerns about constitutional reform and future inclusion of us in the foundation documents of the nation. 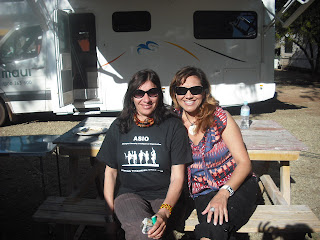 Before we hit the highway back to Darwin, my writerly friends took to the stage to discuss why we write and how we use our words for social change. Chaired by Cathy Craigie, we were challenged and informed by poetry penned by Ali Cobber Eckermann (pictured with me above), Lionel Fogarty and Sue Stanton, a letter by Bruce Pascoe to his two-year old grandson, and readings from our new kids novels by Jared Thomas and myself.

Then with new inspiration, an inflamed fire in our bellies and a greater sense of our fight for social justice in our minds we left Dagaragu and Kalkarindji behind with the aim of doing what we could back in our own countries, and those where we call home. 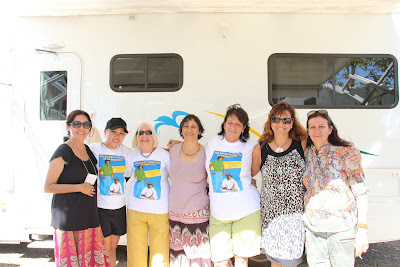 The Girly Gang at the Glamping-site! Pic supplied by Florivelle Lay

For my experience in Gurindji country I am grateful for the following:

* The strength and integrity of the Gurindji and for the inspiration they have given me to continue the fight for rights for our people.

* The passion of Brenda L Croft who worked tirelessly to organise the event that came complete with lessons in history but also included local and national arts and culture.

* The coordination and enthusiasm of Jared Thomas in bringing writers together for public and private conversations about our work.

* The welcome we all received into the community and the hospitality of the locals.

* To have been able to see the extraordinary landscape during the drive to and from Kalkarindji.

* Importantly, I am grateful for the invitation to attend and the Freedom Day celebrations and thank the Fred Hollows Foundation  for making my attendance possible.

This is an awesome post Anita. I was on the emotional journey with you through your words. You can sense the power in those old people and their descendants. Great to hear so many from all over the country were there to show their support for Gurindji. Thank you.

I thoroughly enjoyed reading your reflections and the emotions that came with this journey - and what a significant, sad, courageous and strong journey which we all have benefited from...charmaineg

Thanks Kim - I'm glad you appreciate the Wave Hill mob too. Incredibly strong and dignified and yet not respected by the powers that be. Much peace, Anita