What I’m grateful for on Fraser Island... 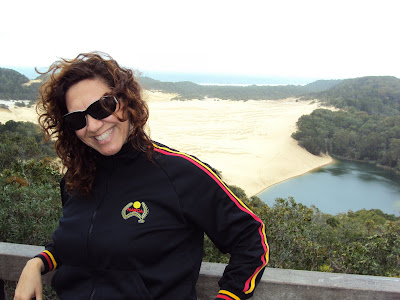 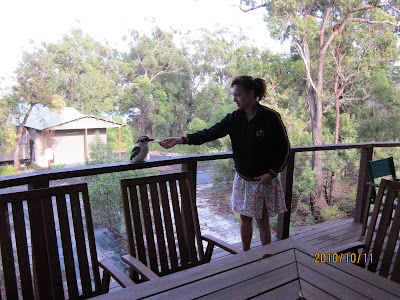 1. KOOKABURRUS: I’m an urban chick. I like lots of people and cars and shopping malls. I like the heartbeat of the city that comes from millions of people on my doorstep. And anyone who knows me knows I’m more of a people person than an animal person. And to be honest, I don’t generally like being woken in the morning by foreign sounds like kookaburras banging their beaks against the reflection on glass doors of my holiday-house veranda. BUT, I admit that I was genuinely grateful for the opportunity to chat to a kookaburra on Fraser Island as my new feathered friend [pictured above]. I think he /she was concussed when he let me stroke his feathers.
2. SIGNORA BOLOGNESE: Our chef from Bris-Vegas, otherwise known as author Josie Montano made cups of tea, fruit pladdas (that’s Josie-speak for ‘platter’), toasted sangers and best of all she came armed with chocolate truffles and books for all. I’m grateful for all her positive energy but also her support for an afternoon nanna nap.
3. BIG KEV: I’m grateful to Uncle - as I call him out of respect - who toured us around the massive island. Did you know Fraser Island is the largest sand island in the world? Well it is - 123 Kilometres long, 240 metres high and 184 000 hectares in size. Kev played tour guide and we’ve visited Mackenzie’s Lake, Eurong, Central Station, Lake Wabby and Sandblow. 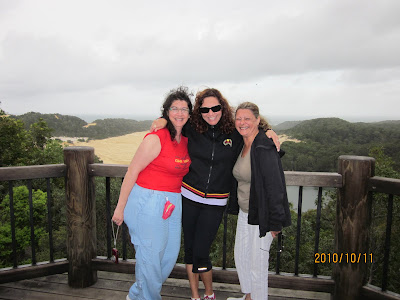 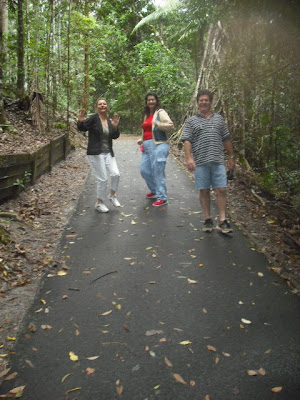 4. FOUR WHEEL DRIVING: I had a 4-wheel drive for nine years a while back, and never once did I take it off road. It was one of those small funky-white vehicles with a short wheel-base, easy to park and great on fuel consumption. I only had it because I wanted a soft-top. So, hitting the sandy tracks of Fraser Island in a ‘real’ 4-wheel drive was a new experience for me. And WHOA! Talk about rough and tumble. I’ve got discs misplaced, need a hip-replacement, have whiplash and seat-belt marks across my chest. Let’s just say I’m grateful for whoever invented the sports bra!
5. DE-BOGGING BACKPACKERS: I’m not a fan of backpackers, but I do try to do some community service each day. Mine on Fraser Islander was supervising the de-bogging of backpackers on a driving track on Fraser Island. It was a little bit scary as sand flew all directions and bumper bars looked like they might detach themselves from vehicles, but Signora Bolgonese was there with a pladda to calm everyone’s nerves, and The Commissioner smoked cigarettes to calm all our nerves.
6. ELI CREEK: I’m grateful to the two young boys who walked Signora Bolognese and I down Eli Creek, the largest creek on the eastern beach of Fraser Island. Famous for pouring up to four million litres of clear, fresh water into the ocean every hour, walking amongst the eels was one the most adventurous things I’ve done in a long time.
7. MAHENO WRECK: We saw a rusty boat on Fraser Island too. It was once a luxury passenger ship for trans-Tasman crossings and a hospital ship during the First World War. The big boat was being towed from Melbourne to Japan for scrap metal when it was caught in a strong cyclone in 1935 and she – why it has been given the female gender I’m not so sure - eventually drifted ashore and was beached on the eastern shores of Fraser Island. What I’m really grateful for is that we didn’t hit a backpacker running in front of our vehicle wanting to get their photo taken in front of the wreck. Of course WE managed to get OUR photo taken! 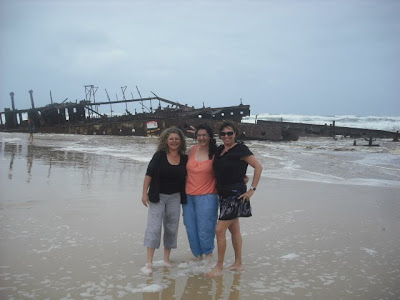 8. DINGOS: I was grateful to see the local native animals in the flesh, some with a little too much flesh for my liking, and I desperately wanted to feed them although it’s illegal to do so. I heard stories that the sandy coloured wild dogs on the sandy island used to just roam amongst the tourists at the Kingfisher Bay Resort back in the day, before the dingo proof fence. I reckon that’s how it still should be. 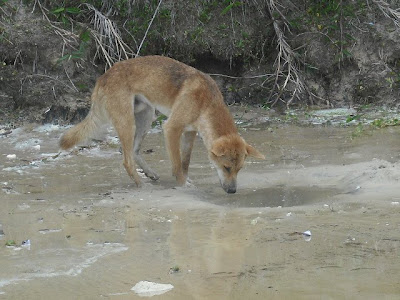 9. EUROLIE : OK, so I’ve found the place I want to set / write the next novel. Here at Eurolie! The perfect setting for creative inspiration. If you’re planning a trip to the Fraser Coast, I recommend this holiday rental for honeymooners, families, and believe it or not, it makes the PERFECT writers’ retreat!! Be sure and tell the owners Anita sent you! And for a small fee I’m sure Signora Bolognese and The Commissioner can be part of your entourage. I always want them in mine!
Posted by Dr Anita Heiss at Thursday, October 14, 2010

Signora Bolognese (AKA Josie ... who after seeing the photos has made an appointment with Jenny .. CRAIG that is!!! ;-)

Here's a 2 Nights + 1 Night Free accommodation for you at Palace Hostel in Hervey Bay.. enjoy! :-)